Anthony Joshua is unabashedly rooting for Dillian Whyte to defeat the boastful WBC heavyweight champion Tyson Fury to remove him as one of the belt holders in the division.

Whyte (28-2, 19 KOs) would be doing the struggling Joshua a huge favor by potentially removing an obstacle to him recapturing his #1 spot in the heavyweight division by defeating the crafty 6’9″ ‘Gypsy King’ from the equation.

Joshua already knows he’s got the talent to beat Dillian, having stopped him in the seventh round in December 2015.

Beating Fury would be a much tougher problem for Joshua, and he obviously knows that. That’s where Whyte comes in. If he can take care of Fury, that’s one less problem for Joshua (24-2, 22 KOs) and his promoter Eddie Hearn have to worry about.

Although WBC champion Fury (31-0-1, 22 KOs) has talked this week of him walking away from the sport after Saturday’s title defense against ‘The Body Snatcher’ Whyte, Joshua obviously is one of many that view that as just blather.

Without question, Fury will continue his career, win or lose, on Saturday, and could give Joshus grief if he’s still in possession of his WBC title.

“I’m rooting for Dillian, even though I hate him and I want to smash him one of these days,” said Anthony Joshua to iFL TV about his hopes for an upset victory for Dillian Whyte over WBC heavyweight champion Tyson Fury.

It’s interesting that Joshua could have “hate” for Whyte, yet still want him to defeat Fury.

That tells you how much adversion Joshua has of wanting to fight Fury because it’s almost unthinkable that he would choose to be in Whyte’s rooting section on Saturday night with the history they have with one another.

Logically, it makes sense for Joshua to want Whyte to defeat Fury because that’s a fight would be a nightmare for him and he’s obviously played it out in his mind how it would go.

Whyte is the underdog against Fury, and it’s widely believed that he only puncher’s chance of winning. But given the punishment that Fury took in his last fight against Deontay Wilder, Whyte has a heck of a chance of searching him.

Fury was knocked down twice by Deontay, and incredibly fortunate that the referee didn’t wave it off after the second knockdown in the fourth round last October.

When you get a fighter that stays down for virtually the entire count, as Fury did, the referee tend to wave the fight off. In Fury’s, he was given the benefit of the doubt by the referee.

“Dillian Whyte needs to come in and look at what Tyson Fury does, and reacts to the complete opposite,” said Joshua.

“It’s his first time fighting for a title, and I think he’ll be hungry,” Joshua said about Dillian.

“This ain’t his tenth time fighting for a title and he can have a little hiccup along the way.  Go on Dillian, I’m with you all the way,” said Joshua about his hopes for Whyte to win on Saturday night. 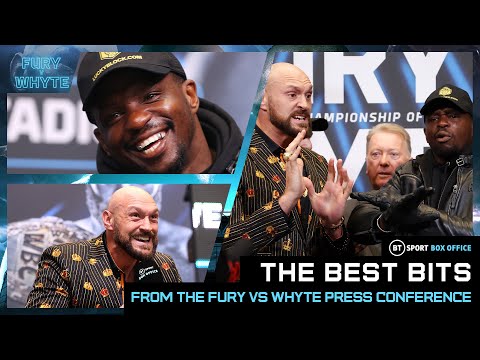