Ruiz (34-2, 22 KOs) has fought only once against 40-year-old Chris Arreola since losing his three heavyweight world titles in a lopsided 12 round unanimous decision to Anthony Joshua in their rematch in December 2019.

The inactivity for Ruiz is worrisome, as he looked like a marginal fighter in his life & death fight against the faded old veteran Arreola last year in May.

Ruiz has been out of action for the last 15 months since that fight, which tells you much about his ambition or lack thereof.

Unfortunately for Ruiz, his chances of getting a fight against Usyk are nonexistent, as the unified champion has made it clear that he only wants a fight against WBC champ Tyson Fury. If he doesn’t get that match-up, he’ll retire. Ruiz has nothing to offer a talent like Usyk at this point in his career.

“I think it’s that Mexican style,” said Andy Ruiz Jr. to Fight Hub TV when asked what he brings to a fight against unified heavyweight champion Oleksandr Usyk that Anthony Joshua could not.

“I think that’s why they put Robert [Garcia] there to change his style to be aggressive and be the bigger man. I thought he [Joshua] needed to pressure a little more and not be scared to get hit.

“Us Mexicans are not scared of getting hurt because if we do, best believe we’re going to get up and try and do our best to win the fight. I feel that’s what he [Joshua] needed a little bit.

“That’s what I’ll bring to the table [against Usyk]. I’ll bring a better match-up fight than Anthony Joshua did, but first, I want to focus on Luis Ortiz.

“A lot of people have been telling me, ‘Why did you want to fight him?’ My main focus and I’ve been training for four months for Luis Ortiz. That’s who I got to beat.

“With my counter-punching, I can wait for him to throw before I throw my combinations. I think he’s going to try and knock me out, but we’re ready for whatever he brings,” said Ruiz. 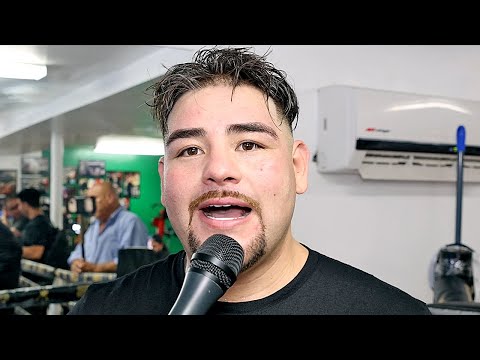