Teddy Atlas believes one of the judges, Glenn Feldman, that scored last Saturday’s fight in favor of Anthony Joshua over unified heavyweight champion Oleksandr Usyk, was attempting to rob him of his victory.

Atlas says Feldman scored the 12th in favor of Joshua, which is the opposite of what the other two judges had it.

They thought Usyk had won the 12th, and it’s hard to make a case where Joshua could have won it because he was getting riddled to pieces with shots the entire round.

Fortunately, the right guy got his hand raised with Usyk (20-0, 13 KOs) getting the victory because it would have created a storm of criticism from the boxing world if Joshua was given the victory.

It’s not that Joshua didn’t fight a good fight, as he looked good up until the tenth. If the fight had ended after the ninth, it could have gone either way.

However, Joshua ran out of gas after the ninth, and Usyk, the better-conditioned fighter, ran away with it by sweeping the championship rounds to get the victory.

“I think this was an anatomy for a fix part II, where you do what you got to do if you want to fix a fight,” said Teddy Atlas at The Fight about Oleksandr Usyk’s win over Anthony Joshua last weekend.

“You get your guy ahead, way ahead. He had to do some really bad dishonest judging to get him way ahead,” said Atlas about the judge that scored the fight for Joshua 115-113.

“After two rounds, I had it 1-1. But then after that, I didn’t give another round [to Joshua] until the eighth round. I had it 6-1 going into the eighth. It was all the boxing lesson, the sweet science being delved out by Usyk.

“Then, of course, we get to the ninth round. I thought the judge [Glenn] Feldman, who had it incredibly for Joshua, I thought that if you’re going to fix a fight, get your guy out in front. Then play around with it a little bit.

“Keep it close but keep your guy ahead. So, he played around, but then he got caught up. He got a little in trouble. He [Joshua] goes and wins the eighth and ninth, which is good for Feldman, the crooked judge, or the incompetent crooked judge. Whatever he was.

“He gets a chance to go down easy street. Okay, the eighth and ninth, give it to Joshua, of course. He had the fight fairly close because he had to keep it close. And then, all of a sudden, bang. He doesn’t expect Usyk; nobody knows what he’s going to do.

“All of a sudden, he’s looking at his scorecard, and it’s going to be a draw if he gives the twelfth to the man that won it, Usyk. He says, ‘Oh, even though it’s been one-way traffic, I got to go against the traffic here. I got to save my card. I’ve got to do my job here. I got to give the twelfth round to Joshua because I’ve got myself in a corner.

“So, he got jammed up a little bit. When Usyk comes back like a barnstormer in the tenth round, he can’t do a damn thing but give it to Usyk. They would have brought in the United States marshals if he gave it to anyone else.

“Feldman wasn’t going to have it a draw because a draw doesn’t get him across the finish line. If his guy [Joshua] is a champion, then a draw keeps his title for him. But in this case, a draw keeps the title for the champion, which was Usyk.

“So, he’s got to do what he’s got to do. The tenth and the eleventh, he had no choice. It was too widespread in favor of Usyk. In the twelfth, he said, ‘I got to jump in here and do what I got to do.’

“He’s the only guy that didn’t give that round to Usyk, the guy that earned it. Thank God we got it right, but it’s not right. I’m sick & tired of it. There’s no oversight. All the other sports have a commission, some kind of national czar commission, somebody that makes sure this crap doesn’t happen.

“But not here, not in boxing. You have all these different omnipotent commissions all across the country. Some of them more of a joke than others. Some of them try hard, but they don’t have any teeth.

“Again, if the promoters aren’t giving them work, there’s no sense of having a commission. There would be no reason to have the existence of one,” said Atlas. 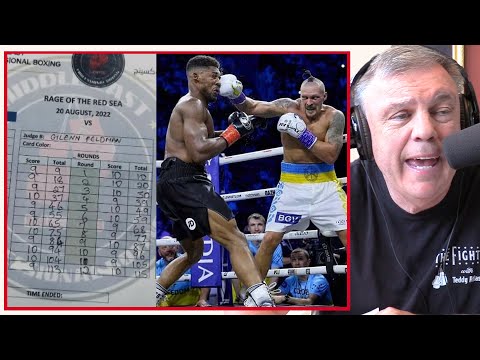