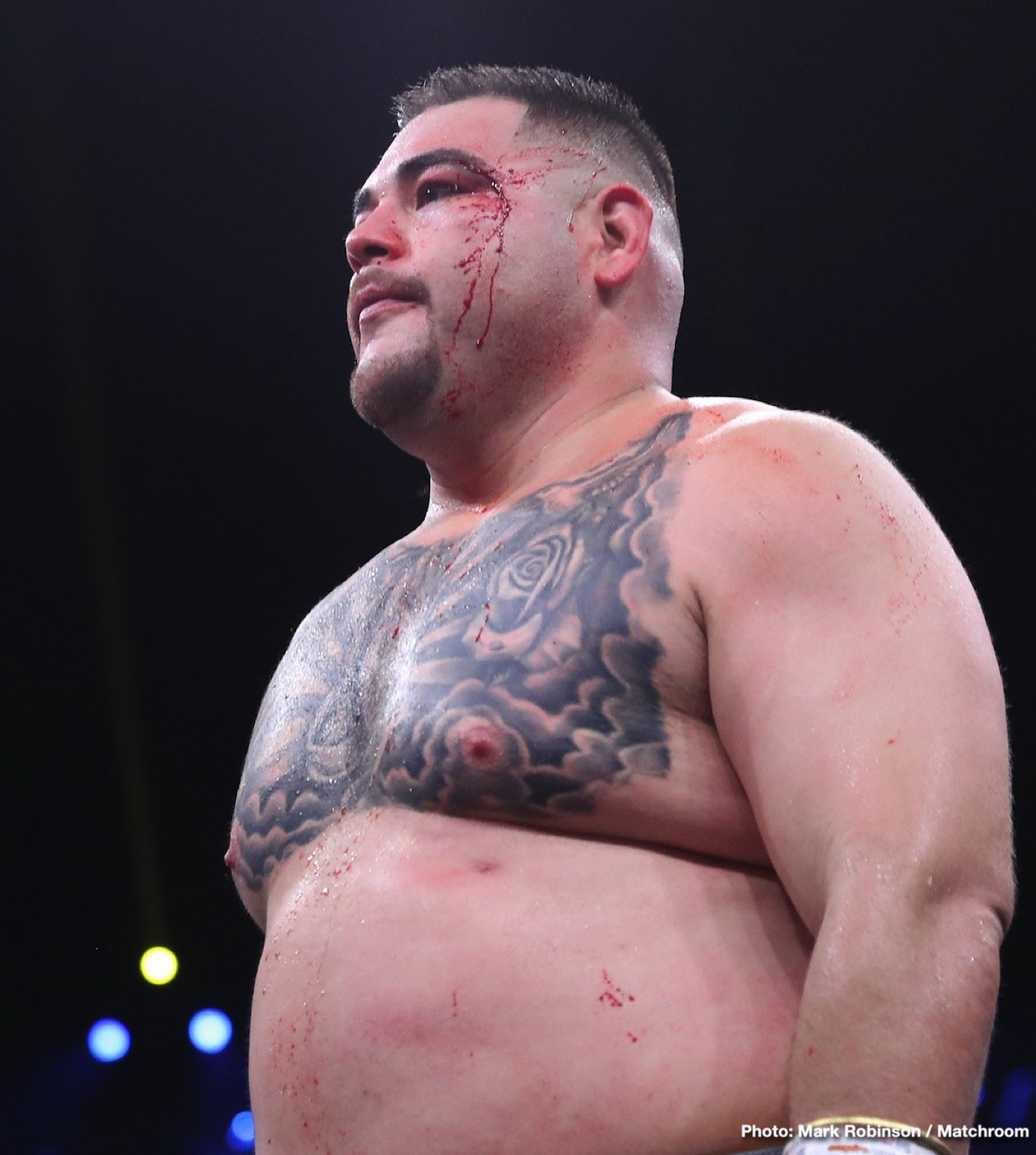 Andy Ruiz Jr. thinks he’ll get a third fight against Anthony Joshua at a later date, and he’ll take advantage of that opportunity to beat him. Earlier on Saturday night, Ruiz Jr. (33-2, 22 KOs) lost to Joshua (23-1, 21 KOs) by a 12 round unanimous decision at the Diriyah Arena in Diriyah, Saudi Arabia.

Ruiz, 31, was just following Joshua around, and not throwing punches. Joshua surprised Ruiz by staying on the move for three minutes of each round, and offering him few chances to land anything.

Although Joshua said afterwards that he would give Ruiz a third fight, he didn’t say when that’ll happen, and it might not be soon. AJ has mandatory defenses he needs to get out of the way against Kubrat Pulev and Oleksandr Usyk. AJ’s promoter Eddie Hearn wants to do a unification match with WBC champion Deontay Wilder, and set up fights with Tyson Fury and likely Dillian Whyte.

Ruiz insists there will be third Joshua fight

“I won one, he won one, and we’re going to go to the third one,” said Ruiz about Joshua at the post-fight news conference on Saturday night.”I think the heart that I have. I’m not scared of any of my opponents. If I’d have let my hands go like I did on June 1st, I would have won this fight.

“He was boxing his life out, but that’s no excuse for me besides me not training as hard, and putting on all this weight. It was a good victory for him. A lot of things were going on with my plate. I make no excuses. I made a lot of mistakes. I know what I didn’t do, and what I should have done for the camp, and that paid off,” said Ruiz.

Unfortunately for Ruiz, he should have taken the fight seriously, because this might have been his last shot. It’s crazy that Ruiz didn’t train all out for the fight, because he was on the deck in their first fight. It’s not as if he dominated Joshua the entire time.

During the post-fight news conference, Ruiz revealed that he failed to listen to his coach Manny Robles, and he was training himself. That doesn’t sound good. If Ruiz lacks discipline to follow what his coaches are telling him, then it could be difficult for him to ever beat Joshua or any good heavyweight again.

Andy says he was too heavy

“I know I’ll learn from my mistakes, and I’ll be ready for the next one. It affected me a little bit,” said Ruiz. “I couldn’t see good out of my left eye. I think I maintained good, and I should have pressured more.

“I think I was waiting too much. My arms weren’t fluid like they usually are, you know? I think it was because of the weight. I weighed in too heavy, and I wasn’t able to throw my combinations. The cut messed me up a little bit, but us warriors, we try got ignore the cuts, and we do our best to do our job.

“I think I’ll prepare myself a lot more. Being the champion for the first time, it was kind of hard. Being over here, being over there, missing training. I don’t want to have no excuses, but I know I’m going to work my a– off. Being not in the greatest shape, I did pretty good. I took all his shots. I felt like I should have pressured more, and let my hands go. I think that’s what I needed to do,” said Ruiz.

More than likely, Ruiz will need to earn a third fight with Joshua rather than have it given to him again. The only way Ruiz can do that is by beating these types of heavyweights:

“I got him a few times, he got me a few times and I ate his punches,” said Ruiz. “When I was going toe-to-toe, that’s when I was connecting. I know for the trilogy, I’m going to be a lot better. If it’s here, it’s even better. I want to redeem myself here in Saudi Arabia.

“I think I started too late. I don’t want to say that the three months that I had, celebrating kind of affected me. To tell you the truth, it kind of did. I can learn from my mistake. I’m glad that I learned it while I was young. This is just the beginning for me. There’s a lot of big fights coming soon. It sure did. I was just following him. I wasn’t doing what I do best,” Ruiz said.

The rumors were right about Ruiz living it up, enjoying the huge money he made in his first fight with Joshua. Ruiz says he didn’t start training for the fight with Joshua until three months before the fight. There wasn’t enough time for Ruiz to take off all the weight that he’d put while celebrating.

Combination punching wasn’t there for Ruiz

“I wasn’t letting my hands go, and I was leaving myself open,” said Ruiz. “I was taking all his best shots. I know for the next one, I’ll be a lot better. What would I do different? Listen to my dad, and listen to my coach, and be more concentrated on the fight. Train harder, and take it more serious.

“There’s a lot of responsibility being the champion of the world. I think the partying got the best of me, but next time it’s going to be a lot better. The only thing he did good was move around as much as he can. When I would throw, I would land punches.

“I think from being overweight, I think it held me back. I think I was looking for one or two punches instead of being the way I usually am in throwing four and five punches, and I think that’s what got the best of me. He did a really good job, and he got me with a lot of jabs. He did a good performance. He boxed me around, and he ran around,” said Ruiz.

The absence of combination punchng is what hurt Ruiz more than anything tonight. When he would come forward looking to land on Joshua, he would throw one or two shots, and then immediately get grabbed in a clinch. Ruiz sometimes fought through the clinch effectively, but most of the time he just let Joshua tie him up. The reason Ruiz allowed Joshua to clinch him without braining him was obviously because he wanted to rest.

Ruiz willing to fight anybody

“He just boxed me. Me being overweight, I couldn’t perform the best that I could. In the heavyweight division, there are a lot of fighters. I want to rest, talk to my team, and think about my career, and look back at what I want to do. I just want to focus more, and train harder for this fight, and don’t look passed my opponents. I’ll fight anybody in the game. I’m not scared of nobody,” said Ruiz.

If Ruiz is willing to fight anyone, then he should contact Matchroom promoter Eddie Hearn and volunteer to fight Michael Hunter, Povetkin, Filip Hrgovic, Whyte or Dereck Chisora. Those would be excellent fights for Ruiz to earn a third fight with Joshua. Right now, there’s no point in Joshua fighting Ruiz again.