As the boxing schedule is starting to pick for the New Year, an intriguing matchup is in store this weekend. The fight is between WBC World Featherweight Champion Gary Russell Jr and Mark Magsayo.

The fight will be televised live on Showtime and will take place at the Borgata Hotel Casino in Atlantic City, New Jersey.

Once the fight was announced it would seem safe to say that Russell will win the fight by a clear and decisive decision. However, by looking at this matchup closely, I think the fight will be a lot closer than some think.

Mr. Gary Russell Jr (31-1, 18 KO’s) of Capitol Heights, Maryland, is currently the longest-reigning world champion today. Russell is a very talented fighter with very good hand speed. Since his only loss to Vasyl Lomachenko back in 2014, he has been a difficult puzzle to solve.

Russell won the WBC title back in 2015 when he impressively stopped Jhonny Gonzalez in the fourth round. He has so far made five defenses of his title and has good wins over likes of Joseph Diaz, Kiko Martinez, and Tugstsogt Nyambayar.

The only problem here is we are in the year 2022. This means Russell has only fought five times since winning the title in 2015. That is a huge problem and his inactivity can be a factor this weekend.

With that being said, he is coming off his longest layoff which is almost two years. Russell has added recently that he has gone through some family issues and is coming to the fight with a slight injury.

His opponent Mark “Magnifico” Magsayo (23-0, 16 KO’s) of the Philippines, will definitely challenge him and put him to the test. Magsayo is an aggressive fighter that has good punching power.

Most notably, he was involved in a slugfest with Julio Ceja last year which resulted in Magsayo knocking out Ceja in the tenth round. Magsayo has been staying active and is now ranked number four by Ring Magazine in the featherweight division.

For the fight, Russell has the experience and the better skills of the two fighters. Magsayo will be bringing his youth and his aggressiveness. Once again, with Russell’s inactivity, rust can be a factor and it might be enough to make things interesting in the fight.

Russell has a lot to lose in this fight. Russell was once the number one featherweight in the world but now he needs a win to throw himself back in the top ten of the division.

If he wins, let’s hope he stays more active therefore we can see him in some big fights. If he loses, this will be another major setback in his career. For Magsayo, he has nothing to lose.

He has worked himself up for this title shot and he is the underdog. By him defeating Russell, it will be a major accomplishment of now only becoming a world champion but defeating an elite fighter in Russell.
Expect a good main event on Saturday. 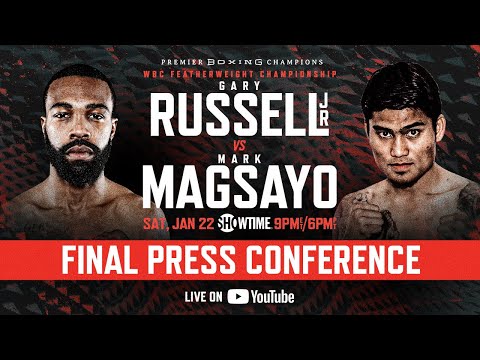