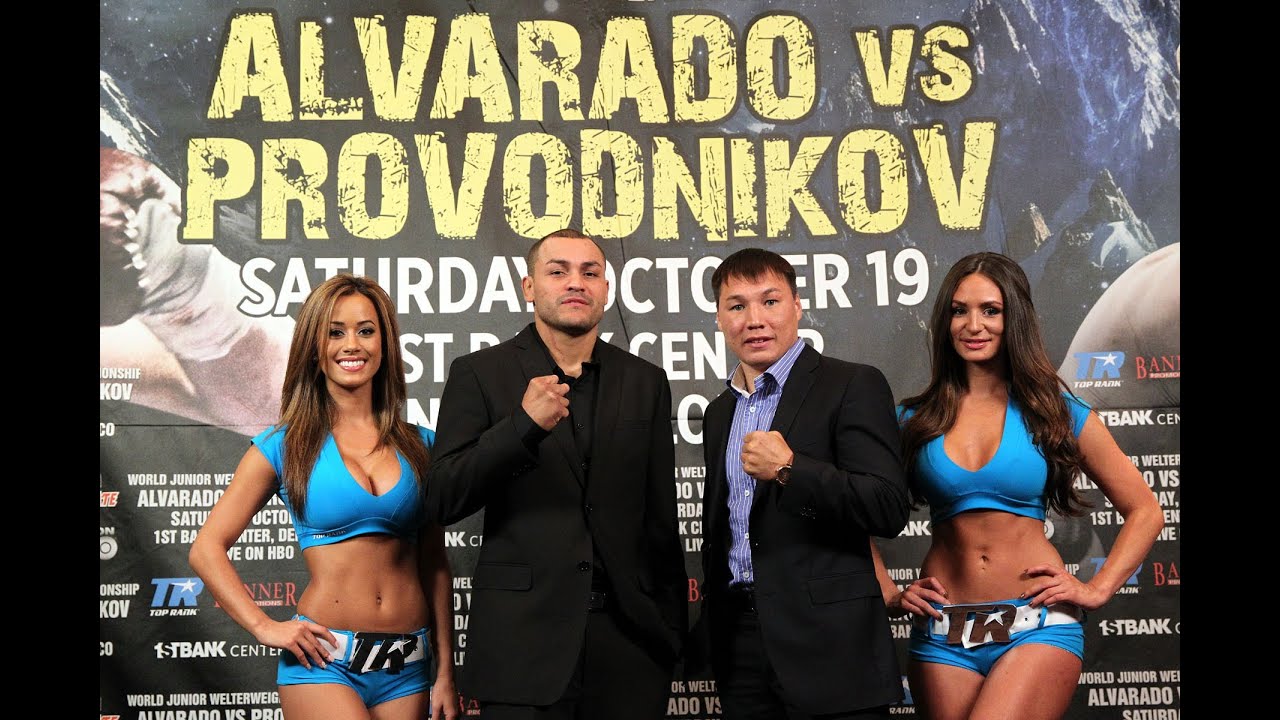 Alvarado and Provodnikov enter this world title tilt fresh from Fight of the Year performances that took place in March, just two weeks apart from each other, and were televised on HBO®. They boast a combined record of 56-3 (38 KOs) — a winning percentage of 95% and a victory by knockout ratio of 68%.

Promoted by Top Rank® and Banner Promotions, in association with Tecate, tickets to the Alvarado vs. Provodnikov world title fight event will go on sale This Friday! August 16 at 10:00 a.m. MT. Priced at $200, $100, $50 and $25, plus applicable fees and taxes, tickets can be purchased online at TicketHorse.com, order by phone at 866-461-6556 and at Tickethorse kiosks located at all Colorado Dick’s Sporting Goods Stores (for credit card purchases only)

“Denver just got its Super Bowl in boxing. I’m so excited,” said Alvarado. “I am going to adjust my training technique and battle plan because there are different challenges from Ruslan Provodnikov compared to fighting Brandon Rios.”

“I’m glad that Alvarado finally agreed to this fight,” said Provodnikov. “This will be an unforgettable fight for the fans. I will not disappoint my team and my fans.”

“Boxing fans have been craving for this match up,” said Todd duBoef, president of Top Rank. The fighters’ styles make for boxing’s in-ring perfect storm.”

“I’m very excited about the fight and glad that Bob Arum and Todd duBoef were able to close the deal with Alvarado,” said Art Pelullo, president of Banner Promotions and Provodnikov’s promoter. “I think it’s a great fight for boxing. It’s what we need. Ruslan was very close to beating Tim Bradley. We think he can win the fight. We know it’s going to be an exciting fight no matter what happens.”

“Mike Alvarado vs. Ruslan Provodnikov is a fight fan’s fight that will deliver non-stop action from the moment the first bell rings,” said Peter Nelson, director of programming, HBO Sports. “The fight crowd in Denver and those tuning in to HBO on October 19 are in for a memorable night of boxing. We are grateful to both fight camps for accepting the bout.”

Alvarado (34-1, 23 KOs) of Denver, had won 10 of his last 14 bouts by stoppage en route to his rematch victory over Brandon “Bam Bam” Rios, on March 30, which not only avenged Alvarado’s loss to Rios in last year’s Fight of the Year, but also made Alvarado a world champion. Alvarado had lost to Rios on October 13, via a seventh-round technical knockout in one of the most action-packed fights of the millennium. Going into round seven, two of the three judges’ scorecards had it 57-57. In the sequel, which was as action-packed as the first fight, Alvarado made subtle adjustments to eke out a narrow but unanimous decision. Notable Alvarado knockout victims have included Breidis Prescott, Ray Narh, Emmanuel Clottey and Cesar Bazan. In 2012 Alvarado fought in two Fights of the Year-nominated fights. On April 14, 2012, Alvarado went toe-to-toe for 10 brutal and exciting rounds winning a unanimous decision over Mauricio Herrera (18-1, 7 KOs). Herrera entered that fight world-rated No. 7 and riding a two-year, five-bout winning streak, highlighted by victories over Ruslan Provodnikov (17-0) and Mike Dallas, Jr. (17-1-1). That was followed by his first fight with Rios in October.

Provodnikov (22-2, 15 KOs), born and raised in Berezovo, Khanty-Mansi, Russia in Siberia, is trained by Hall of Famer World-Famous Freddie Roach. He enters this fight coming off a hotly-disputed unanimous decision loss to undefeated WBO welterweight champion Timothy Bradley, Jr. In their March 16 rumble, Provodnikov, who moved up in weight for his title shot, hurt Bradley numerous times during their slugfest, nearly knocking out the defending champion in the first and second rounds and scoring a knockdown in the final round. Two of the three scorecards had Bradley winning by only one point. Provodnikov, 29. has built up a steady fan base due to his exciting fights which have been televised nationally. Known for his aggressive style and excellent two-fisted punching power, Provodnikov is already more than prepared for his second consecutive world title challenge — this time at his natural junior welterweight level — inasmuch as he has been Manny Pacquiao’s main sparring partner for the past 12 months. His professional resume boasts victories over former world champions Javier Jauregui and DeMarcus Corley, and he enters this fight having won five of his last six bouts, with four of those victories coming by way of knockout, including a sixth-round stoppage of David Torres and a second-round knockout of Jose Reynoso. Torres and Reynoso had a combined record of 37-5-3 when they fought Provodnikov.