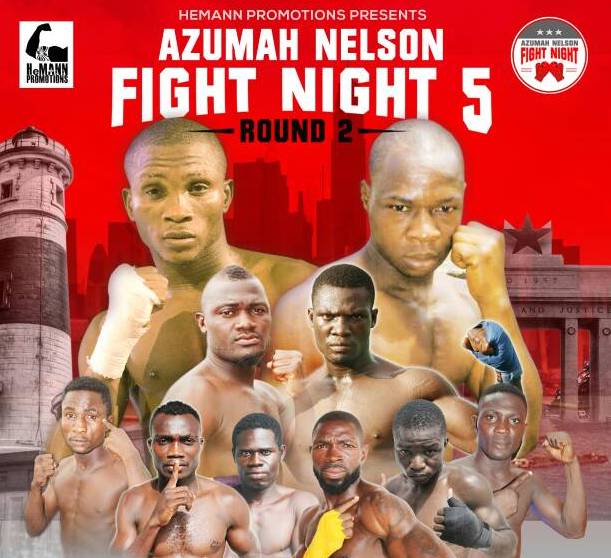 The countdown is almost over and Hemann Promotions present Azumah Nelson Fight Night 5 round 2 dubbed ‘Ghana versus Nigeria’ this Saturday, March 24, 2018 at the Bukom Boxing Arena in Accra, the Ghana capita to be screened live across over 54 countries in Africa and beyond on DSTV’s Supersport.

The show which is inspired by Nelson, the WBC’s greatest ever super featherweight is headlined by the WBA Pan-African super featherweight championship between undefeated Bright ‘Checker’ Ayala of Ghana (14-0, 9 KOs) and Ghana based Nigerian, Wahab ‘Seunzy’ Oluwaseun who is also unbeaten (15-0, 10 KOs).

The co-main fight is also a tough one to call between two undefeated boxers, both former gold medallists with the Black Bombers, the Ghana national amateur team, Emmanuel ‘Mayweather’ Martey (12-0, 9 KOs) versus Emmanuel ‘Horse Power’ Anim (13-0, 11 KOs). At stake is the Ghana super middleweight belt, as well it’s a Commonwealth title eliminator.

The third bout is a Ghana super lightweight championship which sees the undefeated title holder, Nathaniel Kpakpo ‘Punisher’ Allotey (11-0, 8 KOs) take on the Ashaiman based Abraham ‘Ebo Electric’ Afful (8-3-1, 8 KOs) whilst Felix ‘Alvaro’ Ajom (8-1-1, 5 KOs) against the fearless Michael ‘One Bullet’ Ansah (13-8, 6 KOs) in an interim Ghana super featherweight championship is another one that could set the Bukom Boxing Arena on fire.

Azumah Nelson Fight Night 5 initially belled off on December 9 last year but was rained off after only two fights, but keen to whet fight fans appetite, Hemann Promotions have ensured the fights between Wahab and Ayala as well as Martey versus Anim will still come on, for which all roads lead to the Bukom Boxing Arena in the Ghana capital on Saturday.

Tickets are selling fast at GH¢20 for popular stand, GH¢150 for VIP, GH¢300 for VVIP ringside and GH¢450 for ringside table and can be grabbed at Multichoice, Dzorwulu, Koala, Osu and Airport, Zen Gardens, Labone, Honey Suckle, Osu and East Legon as well as AP & PM Village, Airport Residential Area. You can also buy tickets online via EzeePay (www.ezeepay gh.com) or call the promoters on 0209524864 or 0266086004.