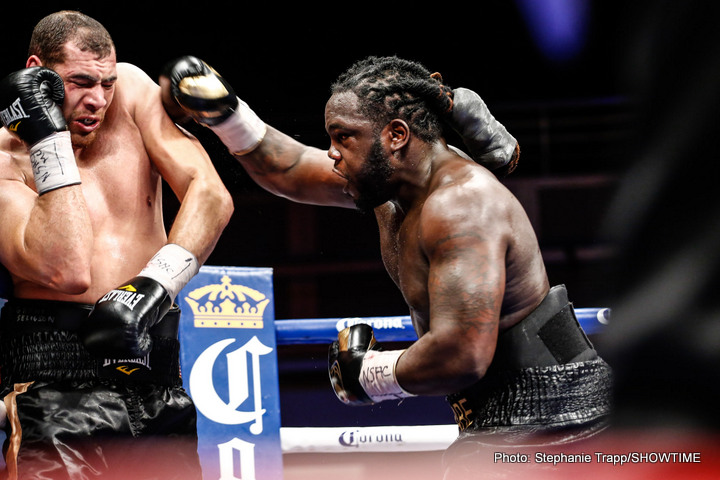 The final two months of 2016 are shaping up to be very eventful in boxing, perhaps making up for what has generally been viewed as a pretty lacklustre year overall. In particular, the heavyweight division has been slow and lacking in big fights, due of course to the unfortunate circumstances with troubled, now former champ Tyson Fury.

But now, with interesting title fights such as Lucas Browne-Shannon Briggs, Joseph Parker-Andy Ruiz Jnr and Wladimir Klitschko-Anthony Joshua either set or in the works (the Joshua-Klitschko fight pencilled in for next March – providing AJ beats Eric Molina on December 10, this being an interesting second defence for the reigning IBF champ) the division is moving again.

And we can now add the Alexander Povetkin-Bermane Stiverne clash, for the interim WBC heavyweight title, to the 2016 schedule. Finally set officially, Povetkin-Stiverne will go ahead in Russia on December 17th.

“World Boxing Council president Mauricio Sulaiman confirms the WBC interim heavyweight title fight between Bermane Stiverne and Alexander Povetkin will be on December 17 in Russia,” the official WBC statement reads. “This fight will be a memorable encounter that will close a great boxing year, propelling its victor, directly into the path of WBC champion Deontay Wilder.”

Indeed, the winner of the Povetkin-Stiverme clash will get a shot at the full title upon the injured Wilder’s return. A lot will depend on how soon Wilder will be able to return to action, and maybe when he does, Wilder will have the opportunity to make another voluntary defence before tackling either Povetkin (who he was to have fought this May) or Stiverne (who he outpointed to win the WBC belt going on two full years ago.

The latest possibility according to certain reports, is that Wilder may return next March, against unbeaten Hughie Fury, cousin of course of Tyson. That would prove interesting but first comes the Povetkin-Stiverne fight. Who wins? Povetkin, beaten only by Wladimir Klitschko, has to be looked at as the favourite, especially as he has home country advantage. How much has Stiverne – who has boxed just once since losing to Wilder – got left?

We’ll soon find out. Both guys can punch and the fight should be an exciting rumble for however long it lasts.