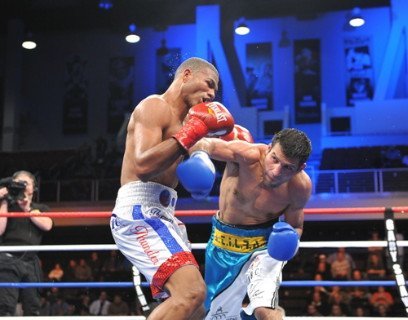 Dulorme set the pace early as he boxed and used his jab to keep Abregu at bay. But in the third round, Abregu landed a powerful right hand and dropped the undefeated contender Dulrome. Thomas took the full 8-count and regained his composure for the time being. In the very next round, Dulorme started to use lateral movement and it gave Abregu problems. Just as it seemed Dulorme was starting to find a rhythm, Abregue landed a left hook and sent Thomas to the canvas once again. Abregu’s right hands had found a home and Dulorme was still on wobbly legs and his corner stopped the fight.

“He was too young and maybe with time he’ll become a better fighter,” said Abregu. “He couldn’t get away from my right hand and I knew at some point he was going to get caught with it. As you can see he did and his corner stopped the fight.”

“I didn’t want them to stop the fight but I respect their decision because they were looking out for me.” Dulorme stated. “I was controlling the fight but he caught me with a good punch but I came up and I was ok. I’ll take this experience and learn from it.”

When the opening bell rang, both fighters started off slow. Mayfield was looking to land his signature overhand right, while Herrera was being the aggressor. The action started to heat up in the fourth round when Mayfield started to land some combinations. Herrera wasn’t backing down and snuck in a couple of right hands himself.

In the middle rounds, Mayfield started to find a home for his left hook. Herrera continued to press the action but was finding it difficult to get off as Mayfield was smothering his punches. A few powerful punches landed for Mayfield as he started to get into a rhythm.

The fight was close as it entered the final rounds but Mayfield started to land some nice combinations. Herrera had his moments late but never landed anything special. Mayfield retained his title with a unanimous decision victory as the scorecards read 96-94, 98-92, 97-93.

“My conditioning was good and I neutralized his punch output with my smothering,” said Mayfield. “I didn’t get hit with too many big shots and I’m happy with the win. Next time I step into the ring I’m going to pick up my punch count.”

“I felt I was landing the better shots on the inside,” Herrera said. “I felt I won the fight but the judges weren’t scoring the body shots I was landing in the trenches. I’ll be back.”

Early on both fighters were felling each other out but the action started to pick up in the middle rounds. Quintero was doing his best to cut off the ring against Vasquez who was using his lateral movement to land his shots. He had success at times, landing some solid hooks to the head Vasquez, but Vasquez continued to back pedal. The same action continued through the middle and late rounds. Neither fighter was ever hurt and the fight went the full twelve rounds.

(8-round featherweight bout) Joel Brunker (24-0, 13 KOs) vs. Carlos Fulgencio (19-9-1, 12 KOs) – Australian born Joel Brunker scored a first round knockout when he landed a devastating left hook to the body of Fulgencio. After Fulgencio couldn’t make the 10 count, the bout was halted at the 1:40 mark.

“I wanted to come out tonight and show everyone that I’m a real fighter,” said Brunker. “When I landed that left hook to the body, I knew he wasn’t getting up. I want to thank Gary Shaw for believing in me and I promise to keep working hard in the gym.”

(8-round welterweight bout) Javier Flores (8-0, 7 KOs) vs. Alberto Herrera (8-8-1, 5 KOs) – Herrera came out the aggressor and won the early rounds as Flores was trying to find his range. Herrera kept coming forward Flores held his ground and the fight ended up in the trenches. Flores’ punches were landing with more force, but Herrera’s chin was holding and the fans were witnessing a great fight. Herrera was giving the undefeated Flores all he could handle and the middle rounds could have gone either way. In the final round both fighters went for broke and toe to toe action erupted. When the final bell rang both fighters were standing but it was Flores who squeaked out a majority decision. Scorecards read 76-76, 77-75 twice.

“I was satisfied with my performance and this was a tough fight for me but it was a fight that I needed to prepare me for the next level,” stated Flores. “I learned that I can go six rounds if need be, because not every fight will end in a KO. Hererra was a lot tougher than I expected but this experience gives me confidence moving forward.”

(6-round light-heavyweight bout) Ryon McKenzie (11-0, 10 KOs) Eric Watkins (7-3, 4 KOs) – In the early rounds both fighters were having their moments, but it was McKenzie who did the most damage. Watkins did his best to back up McKenzie and he had success at times but his punches never seemed to do any harm. As the fight progressed, McKenzie’s heavier hands were landing but that didn’t stop aggressive style the Watkins was displaying. McKenzie used his height, reach and superior boxing skills to win a majority of the rounds. McKenzie won by way of unanimous decision with the scorecards reading 58-56 and 59-55 twice.

“Watkins came to fight and I needed to go some rounds so I’m happy with the victory,” McKenzie said. “Going the distance for the first time is something new that I’m happy to embrace and I’m ready to move on to the next one.”

(6-round heavyweight bout) Eric Fields (21-1, 15 KOs) vs. Kevin Franklin (4-5, 1 KO) – In the first round Fields landed left hook to the head of Franklin and a mouse surfaced under his right eye. Fields continued to back up Franklin with his jab and the fight entered the later rounds. Fields was trying to close out the fight with a knockout, but Franklin was too slick and the fight went the distance. Fields dominated the fight and the scorecards read 60-54 twice and 59-55.

“This was another fight were I feel I learned something new,” said Fields. “It’s time to get back in the gym and work on my craft.”