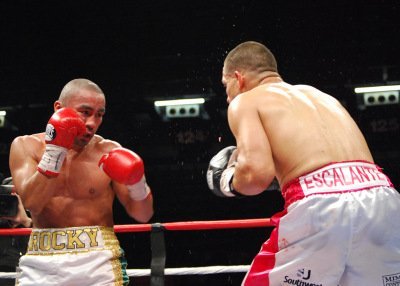 By Joseph Herron – On Saturday night at the historic Joe & Harry Freeman Coliseum in San Antonio, Texas, fight veteran Rocky Juarez (29-10-1, 21 KOs) exorcised the boxing demons and proved that he could still compete at the world class level. After losing his last six fights, the eleven year fight veteran dazzled the crowd in attendance by closing the show in style with an eighth round KO against a very strong and hungry Antonio Escalante (27-5, 19 KOs).

Going into the fight, both fighters appeared to be traveling in different directions professionally. While Juarez hadn’t gained a victory since 2008, the fast rising Escalante had knocked out his last four opponents.

The opening round was a surprise to most at ringside, which saw the fearless Rocky Juarez uncharacteristically use lateral movement to set traps for the younger and stronger Escalante.

Although the former 2000 Olympian enjoyed some early success with the outside fight tactic, the El Paso based fighter was able to close the distance effectively and land the sharper and more impressive punches in the second.

In the third round, Rocky set up a fantastic right hook, straight left hand combination that floored Escalante at the midway point of the stanza. While Tony beat veteran referee John Schorle’s count, he was up on wobbly legs. Although Rocky aggressively pursued Escalante, the 27 year old puncher was able to make it out of the third with his legs underneath him.

In the fourth, both men made a solid case for winning the round and landed excellent shots from mid to close range. The action was back and forth without any fighter gaining the obvious advantage.

During a crucial moment towards the end of the fifth, Tony Escalante was apparently buzzed by a hard right hand that buckled the Mexican born fighter. But the 27 year old puncher took a shot on the beltline and sold a questionable low-blow to the third man in charge to ultimately receive some much needed time to repair.

The sixth stanza presented the same back and forth action, with Rocky attempting to close the distance. Although Juarez is moving forward he seems somewhat tentative when offered the obvious opening at mid to close range. But great action by both men, with healthy exchanges landed at close range.

Seventh round had Escalante winning the opening minute and a half and with Tony actually buzzing the Rock midway through the round with an overhand right. But in the final thirty seconds of the stanza, Juarez rocked his younger opponent with short combinations on the inside.

In the eighth and final round of the bout, Rocky picked up where he left off and picked apart Antonio Escalante with the more meaningful work on the inside. With the sharper technique, Rocky’s shots found their mark a lot quicker and more accurately than his opponent’s.

At the 1:29 mark of the eighth round, Rocky overwhelmed the game but overmatched Escalante and finished him off with a staggering combination to the body and head that caused Tony to take a knee in the neutral corner. Although the El Paso resident fought valiantly, he could not beat John Schorle’s count and conceded to defeat while on one knee.

After the contest, Rocky’s friend and manager Jay Johns of Houston, Texas commented on the 32 year old fighter’s future plans.

“Rocky plans to move down to 126 and fight the best in the division,” stated the devoted boxing proponent. “We want the WBC Champ, Daniel Ponce De Leon. We also want the WBO Champion, Orlando Salido, or any of the big names at Featherweight like Juanma Lopez, Billy Dib, or Mikey Garcia. Rocky is hungrier and more focused at this point in his career than he has been in a very long time and I think everyone saw the difference tonight.”

In the co-main event of the evening, Featherweight prospect Julian Ramirez (5-0, 4 KOs) of Los Angeles, California stopped the game but overmatched Steven Gutierrez (4-2-1, 2 KOs) of Ft. Worth, Texas in a brilliant performance that displayed the southpaw fighter’s versatility.

Ramirez began the fight at a safe distance and landed the straight left hand to the body and head of Gutierrez. After the proud Texas fighter maneuvered his way inside the defense of Ramirez, Julian got the better of the exchanges underneath as well. He threw short compact hooks and uppercuts from a wide variety of angles.

After getting floored in the final twenty seconds of round number two with a wicked shot to the liver, Steven Gutierrez was knocked out in the opening moments of the third and final stanza.

Julian Ramirez set up his wide arsenal of shots with the crucial left hook to the body. His consistent body attack not only sapped the power of Gutierrez, but also tendered the will of the overmatched blue corner fighter.

In the TV swing bout of the evening, Emanuel Ledezma (11-1-1, 2 KOs) pitched a virtual shut out over four rounds against former amateur standout Eddie Tigs (2-4-2, 0 KOs). The tall rangy orthodox fighter picked apart the southpaw pugilist while using effective footwork, moving in and out with the jab and straight right hand.

The three judges at ringside scored the bout unanimously, 40-36 x 3; all in favor of the winner, Emanuel Ledezma.

In his professional debut, amateur standout Kendo Castaneda (1-0, 0 KOs) of San Antonio, Texas entered the ring dressed in the festive garb of Michael Myers. Although the crowd enjoyed the ominous tones of the great John Carpenter, the brooding theme seemed to set the tone for a “trick or treat” type of contest.

Unheralded young Albert Romero (1-3-1, 0 KOs) of Austin, Texas proved to be a very game inside fighter and a nagging thorn in the side of the highly touted prospect. Although Castaneda began the bout landing the straight right hand at will to the chin of the visiting fighter, Romero wisely changed his fight tactic and took the fight to the inside of Kendo’s defense.

The crafty Austinite threw short, compact shots that frustrated Kendo, and also served as bait for a fire fight on the inside. Whenever Castaneda took a step back and fought Romero at mid to long range, the San Antonian got the better of the exchanges. But whenever Kendo was lured underneath, he received more punishment than he dished out.

While behind of all three judges’ scorecards going into the fourth and final round, Kendo showed his mettle and floored his opponent with a sharp right hand to the jaw. Castaneda pulled out the victory with the much needed knock down at the closing bell and celebrated a hard earned victory.