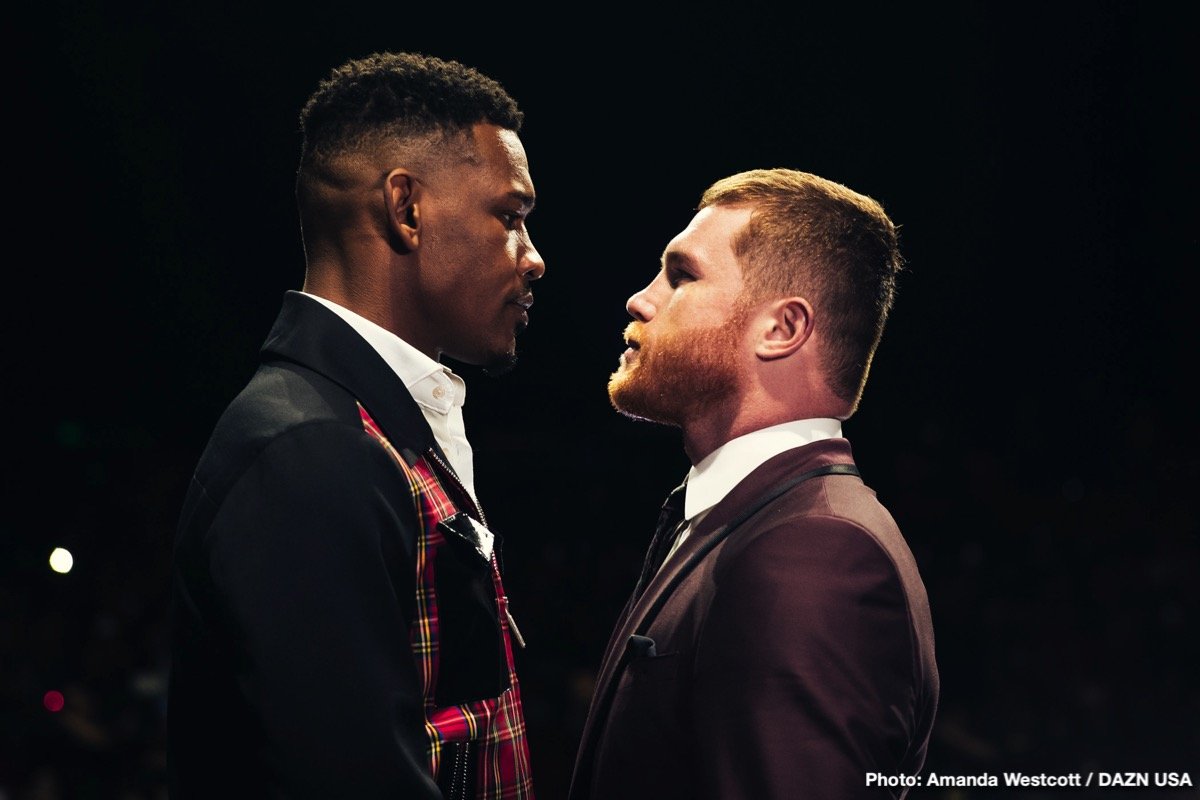 IBF middleweight champion Daniel Jacobs (35-2, 29 KOs) will be two points down on the scorecards the moment his fight starts with WBA/WBC middleweight champion Saul Canelo Alvarez (51-1-2, 35 KOs) on May 4 on DAZN in Las Vegas, Nevada, according to Gennady Golovkin’s trainer Abel Sanchez. He feels that Jacobs will need either a knockout or knockdowns of Canelo, 28, in order for him to have a chance of winning the fight.

Sanchez has seen for himself how difficult it is for someone to beat Canelo when he’s fighting in Las Vegas, as his fighter former IBF/WBA/WBC middleweight champion Golovkin (38-1-1 34 KOs) failed to come up with a victory over the popular Golden Boy Promotions mega-star Alvarez in two tries fighting him at the T-Mobile Arena in Las Vegas. In both occasions, GGG was seen as the winner by many boxing fans and members of the media, but the judges felt that the Kazakh fighter hadn’t done enough. Now it’s Jacobs’ turn to fight Canelo at the T-Mobile, and Sanchez thinks that he’s going to need to do something special if he wants to get the victory against Alvarez. Just boxing him from the outside probably won’t be enough for Jacobs to get the win. Canelo just signed a monstrous 11-fight, $365 million deal with DAZN, that will keep him busy for the next five years of his career if he completes the deal. It’s unknown if the entire deal is guaranteed or not.

“Canelo should win, but don’t sleep on Danny. Danny is a hell of a fighter, but Canelo seems to be [unbeatable] in Vegas,” Sanchez said to Villainfy Media. “Jacobs is two points down already. He’s going to have to knock him [Canelo] down or knock him out in order to win, but Canelo has got the tools to beat Danny,” Sanchez said.

Will a knockdown of Canelo be enough for Jacobs to win the fight? Sanchez might be a little too conservative in saying that Jacobs only needs one knockdown to get Canelo. He might need two or even three to get the win. Look at Deontay Wilder. He scored two knockdowns of Tyson Fury, and he ended up getting a controversial 12 round draw last December. A lot of boxing fans felt Fury should have won, even though he appeared to be out cold in the 12th round after being dropped hard. The referee gave the knocked out looking Fury a count instead of stopping it. In that case, Jacobs might need a lot more than one knockdown of Canelo for him to get the decision win. Will three do the job? It’ll depend on how well Jacobs does in the other rounds. If he’s fighting passively, moving around the ring, and getting knocked down himself from time to time, then it probably won’t help him if he knocks Canelo down. He’ll need to knock him out to get the win.

Jacobs is the B-side fighter in this match against arguably the biggest star in North American in Canelo Alvarez. You can’t ignore that. If this professional wrestling, Canelo would be the star and Jacobs the opponent. The star rarely loses in professional wrestling. Jacobs is going to have to do something that makes it perfectly clear to not only the boxing fans watching it live at the T-Mobile Arena and on DAZN, but also to the judges, that he’s the better fighter of the two. What probably won’t work is for Jacobs to stay on the outside and pick Canelo apart all night long like Golovkin did in his first fight against him and how Floyd Mayweather Jr. did. The judges didn’t respond to Golovkin clearly out-boxing Canelo in the first fight, as they scored the fight a 12 round draw. Jacobs is going to need to take the heat to Canelo, and beat him in a war or jump on him early and blast him out like he did with Peter Quillin.

“A difficult fight, but Canelo wins,” trainer Abel Sanchez said about Canelo’s fight against Jacobs. “Difficult because Danny is a big man. Danny is in a no lose situation, because he’s facing the best middleweight in the world [Canelo], a champion of the world. So he’s going to give it all he’s got. Whatever happens, happens,” Sanchez said.

Sanchez sees Canelo as the better fighter, and the guy that will win based on his boxing skills, but he’s still not ready to completely count on Jacobs if he fights his fight. Canelo has an advantage in that he’s not only fighting in his venue at the T-Mobile Arena in Las Vegas, but he’s got a lot of Jacobs’ past fights to study to take advantage of the blueprint Dmitry Pirog and Golovkin created in how to beat him.

“Canelo has something to lose, not only because he has all the belts; he’s got to look exceptional against Danny to try and prove that he can do more against him than Gennady,” said Sanchez.