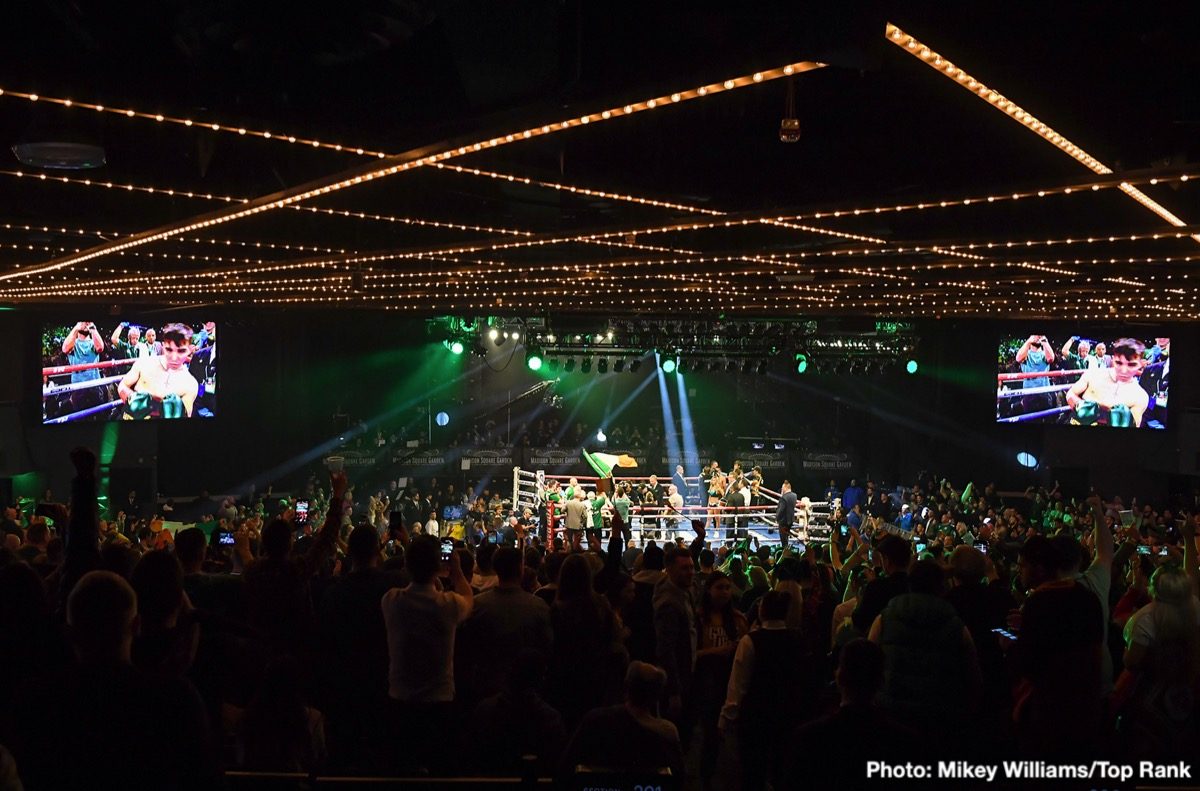 1st Quarter Boxing Progress Report:  For better or worse, 2019 is the year of the mid-level fight and that’s not necessarily a horrible thing. With a slow weekend upon us this hack-of-a-scribe figured it would be a good time to asset the first quarter of 2019 on this side of the pond. As we all know the boxing landscape has changed with the newer streaming service DAZN and recent investments made by FOX/ESPN along with Showtime upping its budget. HBO is dead, boxing is booming being made available across mainstream platforms with a record amount of televised/streamed broadcasts. Yet here we stand in early April wondering when the schedule will fill up with “Big” fights the type that unifies a division. Much like the last two years in relation to the United States and Russia, the Cold War between the powers that be in boxing seemed to have fallen into yet another deep freeze.

Since 2016, Showtime normally has a wide lead out of the gates compared to everyone else with the majority of meaningful fights happening from January to July. This year they’ve taken a step back allowing competitors to predict their downfall by year’s end. Obviously, Bob Arum and Eddie Hearn’s claims of Showtime’s death is not true considering the ink somewhat recently dried on a new 3-year agreement with Al Haymon’s Premier Boxing Champions.

According to the press release, it would seem Showtime wants to spread content out across the year instead of blowing their load by the summer and limping to the finish line. Along with adding PPV’s to the fold to make up the difference of a rising budget and big money rivals coming for blood. The run Showtime had from 2016-18 as the top producers bar none seems impossible to duplicate with Fox sports signing a 4-year deal with PBC. That’s not to imply it will be a repeat of 2015, when Stephen Espinoza and Showtime experienced major fallout in product. Some media members and a whole lot of avid followers of the sports didn’t read the fine print, that being 12 shows, one per month as far as the PBC is concerned which limits them to an extent. Hopefully the Shobox cards keep coming and we get some good stuff on their international or special edition telecasts.

ESPN’s start to the year has been hit or miss from an interesting Kovalev/Alvarez rematch to a barnburner of double header that featured Ramirez/Zepeda and Beltran/Okada. A clear miss was last Saturday’s card and their underwhelming schedule on proper ESPN and ESPN+ thus far. Vasiliy Lomachenko and Terence Crawford are on low exposure outlets in ESPN+ and on PPV facing subpar opposition. Let’s hope Top Rank has a improved summer unlike the last one.

Beyond some major upsets on DAZN like Pablo Cesar Cano’s 1st round stoppage of Jorge Linares and Andrew Cancio’s 4th round KO over Alberto Machado, it’s been more of a wait and see approach for subscribers. A few low-to-mid-level-entertaining scraps along with anticipation for a stacked late April to June run has DAZN in a good spot amongst the hardcore fans, now let’s see how they fare with the casuals having doubled their monthly fee from 9.99 to 19.99.

As of now the network having the best year is the PBC on Fox/FS1. In January, Thurman/Lopez was better than expected and Plant/Uzcategai delivered ratings and action wise. February gave fans back and forth fights in Dirrell/Yildirim and an action packed scarp in Figueroa/Molina among others.  In March, Porter vs. Ugas was a very close call, Spence/Garcia wasn’t competitive in the ring but it did produce a major event feel and surpassed PPV expectations, and so far Lipinets KO of Peterson was the best fight of the year.

As previously mentioned starting at the end of April DAZN has the best product on paper with Canelo/Jacobs, Rungvisai/Estrada 2, Anthony Joshua making United States debut and World Boxing Super Series kicks in as well featuring several interesting fights on paper. If Canelo gets by Jacobs we may very well get the third installment of Canelo vs. Golovkin along with 3 tourney main events that will likely be mouthwatering on paper.

Beterbiev vs. Kalajdzic on May 4th is by far the most appetizing matchup on ESPN’s 2nd quarter schedule. The following week Top Rank gives us an all-action doubleheader Berchelt/Vargas 2 & Navarette/Dogboe 2. If Crawford gets past Amir Kahn the best case scenario is probably Terrence vs. Danny Garcia otherwise it may end up being Luis Collazo or Alexander Besputin. Lomachenko vs. Richard Commey later in the year gives fans something to sink their teeth into as well. Not many rumors are swirling about future fights in June or July at this point.

The PBC on Fox has Hurd/Williams & Harrison/Charlo 2 with winners meeting later in the year and Showtime’s Shields vs. Hammer is great for woman’s boxing. FS1 title eliminators Quillin vs. Truax and Derevyanchenko vs. Culcay are evenly-matched, while Garcia/Granados might overachieve.  Hopefully Santa Cruz vs. Russell Jr. gets made this summer along with Pacquiao/Thurman and Spence/Porter getting finalized in a timely fashion for FOX and Showtime.

All and all its been a subpar year compared to the last couple, yes we’ve gotten more mid-level contender/prospect fights, and boxing can be found everywhere at any given time. But just like many folks were complaining about the PBC’s overpopulated and spread out schedule back in 2015, more bouts that resemble filler rather than quality content is bad for the sport. Bottom line, quantity is not better than quality so let’s hope we continue to gain momentum as the year moves on by getting some cross-promotions and better in-house matchups.