The great Oscar De La Hoya had his pro debut on this day 30 years ago. The 1992 Olympic gold medal winner (Oscar movingly paying tribute to his late mother after capturing the gold), “The Golden Boy” from Los Angeles, was moved fast. There was even talk, nothing which came of it, that De La Hoya would be matched with the formidable Azumah Nelson in his very first pro fight!

Instead, and far more sensibly, the 19-year-old, boxing at 133 pounds, was matched with a good fighter in Lamar Williams, who was sporting a decent 5-1-1 pro ledger. The De La Hoya story began at paid level as Oscar scored a first-round stoppage win in Inglewood, California. So much professional gold awaited De La Hoya in a career that saw him become a genuine crossover superstar.

De La Hoya would go on to collect belts at no less than six different weight divisions – super-featherweight, lightweight, light-welterweight, welterweight, light-middleweight, middleweight – and Oscar, showing his greatness, defeated all manner of styles. Be it huge punchers, classy boxers, rugged warriors, De La Hoya faced them all and more of than not he emerged victorious. Yes, De La Hoya suffered defeat, in fact six times during his 16-year pro career.

But Oscar took risks, he faced dangerous rivals numerous times. De La Hoya, as the saying goes, dared to be great. Here’s a look at some of De La Hoya’s finest, most notable ring triumphs:

Facing a clever veteran who had been in with some of the best, De La Hoya’s fists were again lethal. Hernandez, a former champ at 130, had his nose shattered by De La Hoya, the fight ending as “Chicanto” was in great pain and unable to continue.

Facing a real box if tricks in the slightly past his best but still incredible Whitaker, De La Hoya had picked some fight for his welterweight debut. It was an at times frustrating fight to watch, and the final decision proved controversial. But De La Hoya, in decisioning “Sweet Pea,” defeated perhaps the finest defensive boxer of his time.

A bad blood grudge-fight, this 154 pound showdown was one De La Hoya simply had to win. The action was terrific, with both men having their moments. Until Oscar broke through in the tenth and badly hurt Vargas. Again showing his efficiency as a finisher, De La Hoya closed the show in round 11.

The most physically dangerous fighter De La Hoya could have faced at the time, African warrior Quartey pushed Oscar hard, his body work proving damaging. These two welterweight rivals exchanged knockdowns in round six, this during an at times thrilling fight. De La Hoya, showing great late-rounds stamina in a fight, scored another knockdown in round 12 and the end seemed near. Instead, De La Hoya had to make do with a split decision win. 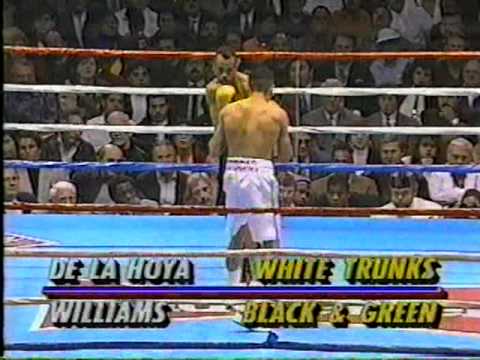