Even at age 48, “Big” George Foreman was a formidable, no-joke heavyweight. Foreman in 1997 was a slow but steady, constantly advancing juggernaut armed with a punishing left jab, a club of a right hand behind it, a rock for a chin, and seemingly limitless stamina. Foreman was all-business when he fought, this while continuing to trumpet his “the age of 40 nor 50 is no death sentence,” rallying cry. 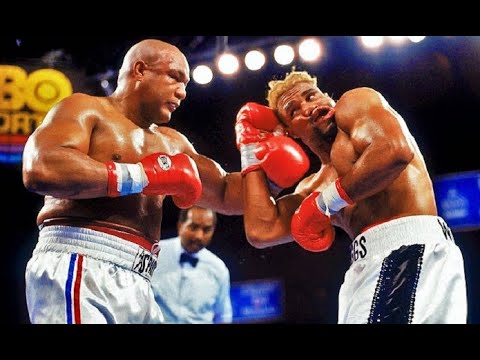 But Foreman was so relaxed in the ring, comfortable; his second incarnation a vastly different entity to the brooding Foreman of the 1970s, who was running on empty after a few rounds on the occasion when a fight of his actually lasted that long. And in his final fight, which took place a quarter of a century ago today, against Shannon Briggs, Foreman was again steady as a rock and seemingly the winner after 12 rounds that saw the much younger fighter look gassed as well as beaten up.

But, to the shock of absolutely everyone, perhaps Briggs included, Foreman was judged the loser by two of the three wise men sat at ringside (the third judge having it level). Briggs had taken Foreman’s lineal heavyweight title (along with his lightly regarded WBU belt), and the New Yorker would have the distinction of being the very last man to get punched in the face by one of the greatest heavyweights in history (and suffer a busted nose as a result).

Soon after the decision – 117-113, 116-112, 114-114 – the appeals were launched, the investigations began. The decision was deemed so bad by Foreman’s current promoters, Jeff Wald and Irving Azoff, that an official appeal was launched, this with the intention of having the decision overturned. What’s more, Wald and Azoff were reportedly set to hire a private detective to snoop into the background of the three judges (whether a private eye was actually hired, and whether he found any dirt on either of the three officials is not known).

In any case, the decision stood. Forman retired with grace (“How can I say I was robbed when I’ve got $5 million in my pocket,” George said after the “loss”) and Briggs went on to give Lennox Lewis a hell of an exciting-while-it-lasted slugfest. There was some talk of a possible Foreman-Briggs II (because the winner’s name goes first), while George was also tempted to come back one more time for a fight with David Tua (George’s wife talked him out of it). And a Foreman-Larry Holmes fight was actually announced in late 1999, only for the financing to fall through; leaving us to forever wonder which of these 1970’s and beyond heavyweight legends would have prevailed.

It’s a cliché, but the world will never again see as remarkable a fighter as George Foreman. Whether it’s the fighter we saw in his first career – raw, savage power, immense physical strength, a desire to land very real hurt on each man he faced in the ring. Or the fighting man we saw in Foreman’s second ring career – clubbing power, a deep well of stamina, immense physical strength, acute ring smarts. Foreman and his thick book of achievements will never be eclipsed.