Artur Beterbiev (17-0, 17 KOs) had to overcome adversity on Friday night to hold onto his IBF & WBC light heavyweight titles with a grueling blood-filled ninth round knockout victory over Marcus Browne (24-2, 16 KOs) on ESPN+ at the Bell Centre in Montreal, Canada.

Beterbiev showed incredible heart in overcoming a glacially slow start in the first quarter of the contest to come on strong like a man possessed from the fourth round until finishing off the 31-year-old Browne in the ninth with a powerful left to the body. 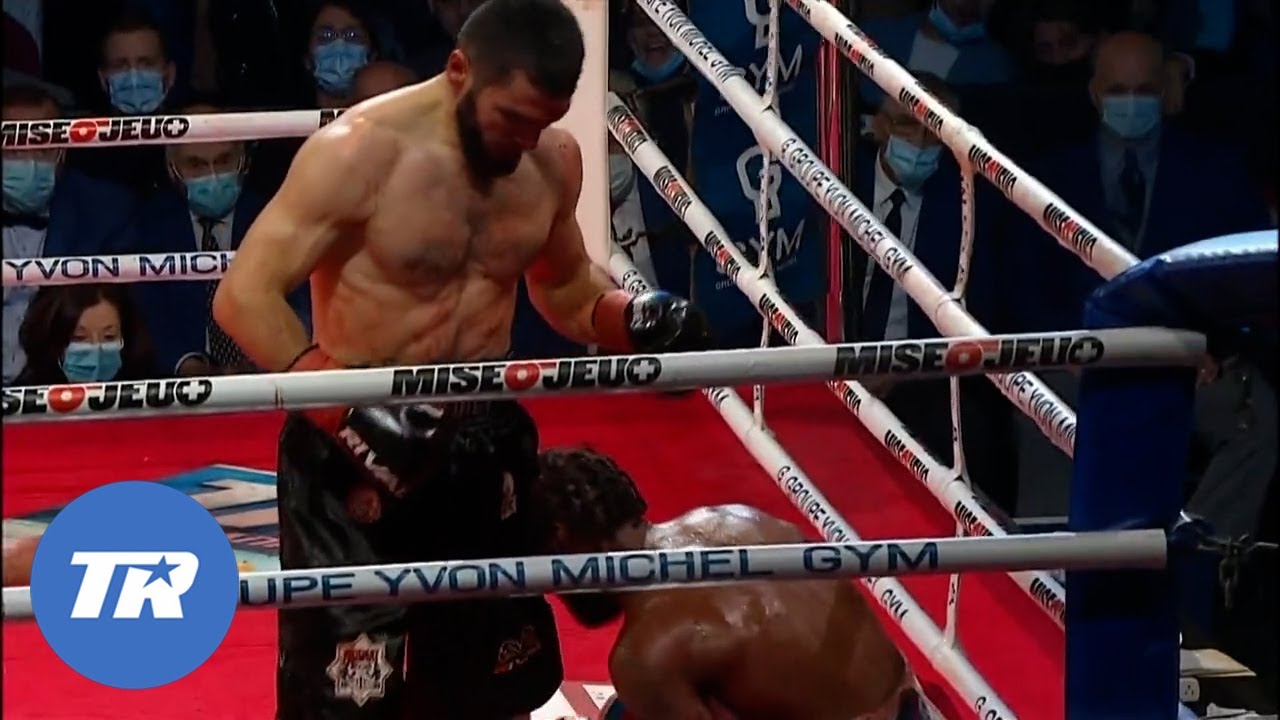 Beterbiev also knocked Browne down with a left to the body followed by a hard right hand to the head. It was clear with the way Browne was bending forward slightly while down that it was the body shot from Beterbiev that sent him down.

Browne, whose face was a bloody mask, shelled up against the ropes in the final sequence in the ninth round. Beterbiev unloaded on him with thudding shots to the head and body.

He landed a right uppercut that snapped Browne’s head back, followed by a perfectly placed left hook to the body that dropped him. The fight was then stopped with Browne down and hurt. The time of the stoppage was at:46 of round nine.

Many boxing fans will second guess Browne’s decision to continually retreat to the ropes from the fifth round when being pressured by Beterbiev.

Looking at it from a logical perspective, Browne would have been better off if he’d stayed in the center of the ring, and used movement to keep from getting hit by Beterbiev.

However, the punches to the body that Beterbiev was hitting Browne with while he was moving took away his legs, causing him to retreat to the ropes to use them as support so that he could reduce the target area that Artur had to aim to him in the midsection.

To Beterbiev’s credit, he proved to be adept and leaning forward to place left hooks to the liver area of Browne’s body when he was against the ropes and bending forward.

What a gutty performance by Beterbiev to fight the way he did with massive amounts of blood dripping from the huge gash in his forehead into his eyes from the fourth round. There are not too many fighters that would have had the mental fortitude to do what Beterbiev did tonight if they’d been in a similar circumstance.

In hindsight, the fight would have been easier for Beterbiev if he were capable of throwing uppercuts because Browne was bending forward a great deal when he was on the ropes to avoid getting hit to the body. 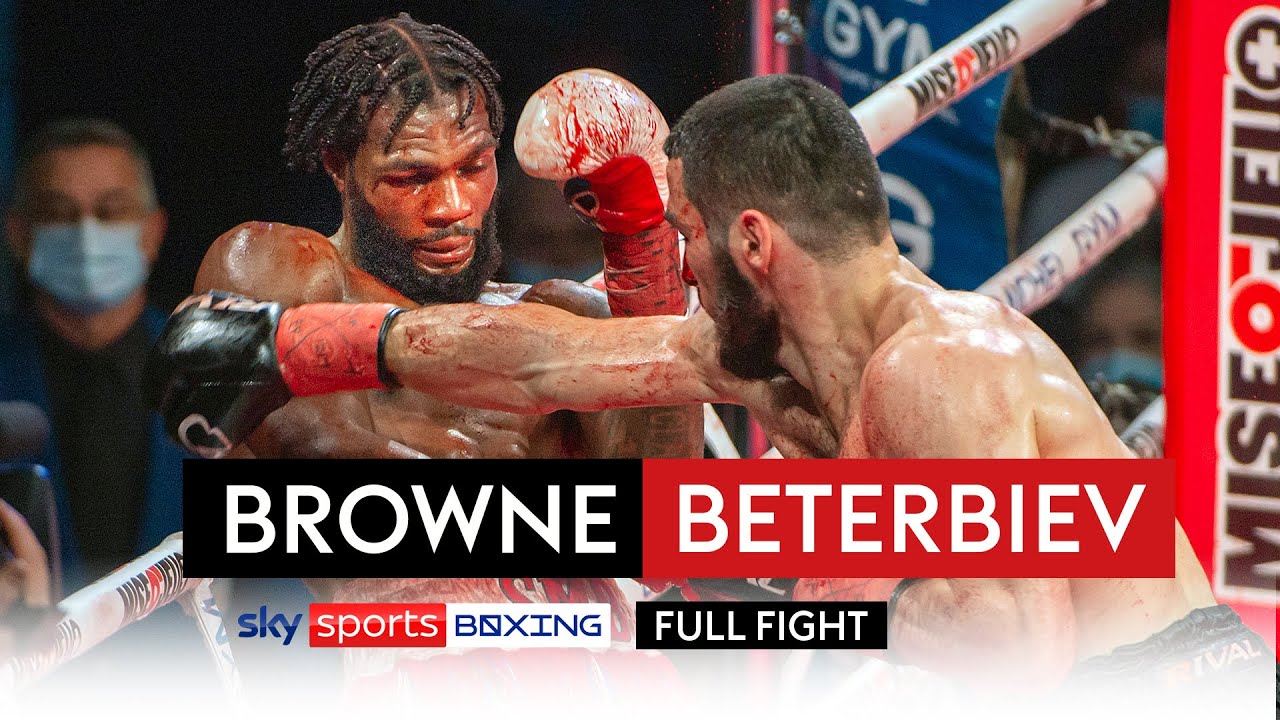 Both fighters were cut from a clash of heads in round four, but Beterbiev, 36, got by far the worst of it with a massive gash on his forehead.

Luckily for Beterbiev, the referee showed restraint, allowing him to fight with blood pouring out of his cut in rivers, dripping down onto him, the canvas, and Browne. Even the referee had blood on him.

With the victory, Beterbiev keeps his hopes alive for a lucrative payday fight against Canelo Alvarez in 2022.

Unfortunately for Beterbiev, his cut will need time to heel, and it’s unlikely he’ll be able ready to go by May 2022, should Canelo choose him as his next opponent for the Cinco de Mayo holiday weekend.

Nevertheless, Beterbiev keeps himself in the running to collect the golden ticket to fight Canelo at some point next year, be it May or September.

Canelo might be licking his chops after watching Beterbiev struggle in the early rounds against Browne, and that may make him brave enough to make the call to set up the fight.

The Beterbiev that we saw tonight in rounds 1 to 4 was a completely different animal to the one that took charge of the fight from the 5th round on. It was like Beterbiev had been transformed into a superhero with the way he turned it up, becoming a seek & destroy monster in the ring, stalking Browne relentlessly.

On the negative side, Beterbiev struggled with throwing shots when Browne was moving around the ring. It didn’t matter how little Browne moved; Beterbiev couldn’t get his shots off unless he was at a dead stop and there to be hit.

Read:  Talk Of Usyk Gaining 15kg Proven To Be False At Official Weigh-In

Beterbiev can’t do that against a quality operator like Canelo Alvarez or Dmitry Bivol. Those guys will have spotted Beterbiev’s weakness from tonight, and they’ll make sure they stay on the move and not make the foolish mistake that Browne continually did tonight by shelling up against the ropes, making himself a sitting duck for Beterbiev.

Assuming Canelo wants no part of fighting Beterbiev next, the Russian fighter might want to look at a unification clash with either WBA champion Dmitry Bivol or WBO champion Joe Smith Jr.

I’m not sure if it would be in either of those two champions’ best interest to fight Beterbiev right now because if they just stand pat, Canelo will soon face both of them when he attempts to become the undisputed champion at 175.

Smith Jr. and Bivol can make millions fighting Canelo, and it doesn’t make sense for either of them to take a risky fight against Beterbiev right now.

Canelo has already let the World Boxing Council know that he wants to move up to cruiserweight next to challenge WBC champion Ilunga Makabu for his title next May if he wins his next title defense against Thabiso Mchunu on January 29th.