Caleb ‘Sweethands’ Plant doesn’t believe that Canelo Alvarez has improved since having major “trouble” in his fights against Floyd Mayweather Jr. and Erislandy Lara many years ago.

IBF super middleweight champion Plant (21-0, 12 KOs) asks where the proof during the last seven years of Canelo’s career shows that he’s improved is?

The truth is, Canelo hasn’t fought ANYONE like Mayweather or Lara since 2014, so it’s impossible to know with 100% accuracy that he’s improved at all.

We know that Canelo has gotten bigger, but you’d have to make a colossal stretch into fantasyland to say that he’s a better fighter now than he was back then.

Canelo looks older and has lost hand speed, and his work rate has dropped dramatically over the last seven years. You can’t say Canelo is better than he was at 22 & 23.

He’s 31 now, and he looks older, and stamina is just as bad if not worse than it was back then when he struggled against Mayweather and Lara.

“I possess a lot of the same skills and attributes that those guys did, and they gave him a lot of trouble,” Plant said about Erislandy Lara and Floyd  Mayweather Jr, who gave Canelo problems. “I’m a  full-fledged super middleweight.

“Fighters like Amir Khan, I possess the same skills and speed, but I’m 6’1” and full-fledged super middleweight.  “I’ve been fighting at this weight for a long time.

“Since he [Canelo]  had those fighters that he had trouble with, who has he fought to prove that he no longer has trouble with that,” said Plant in speaking the obvious about Canelo facing opposition nothing like Lara and Mayweather during the last seven years of his career.

Canelo has fought guys that are entirely different from Mayweather and Lara in the last seven years. As a result, you can’t say he’s gotten better, especially when you look at how he’s aged with his appearance and his work rate dropping off.

The Canelo fans make excuses for his work rate going down by saying that he’s loading up on his shots and making every punch counter, and that’s not the reason.

What Canelo is doing is what aging fighters do. He’s considering his energy, given that he doesn’t have the engine to throw a lot of shots as he used to without gassing out.

You can argue that Canelo’s work rate dropped off after he gassed out in his fight with Gennadiy Golovkin, as he appeared to lose five of the last six rounds. Since the Golovkin fight, Canelo has paced himself, throwing very few shots, so he doesn’t gas out.

Plant not worried about his cut

“I know  I’m the hungrier fighter,” said Plant. “I’m going to get my hands raised by any means necessary, so whatever is possible. I’m relaxed, calm, and confident and waiting for the bell to ring on Saturday night.

“It’s under my eye regardless, so I don’t have to worry about it,” said Plant about the cut he sustained during last September’s press conference with Canelo in Los Angeles.

Plant whistles past the graveyard with him, saying his cut won’t be a problem because it’s under his eye. Wishful thinking on Plant’s part because there’s a good chance it will open on Saturday, and if that happens, Canelo is going to pour it on to shoot for a stoppage. 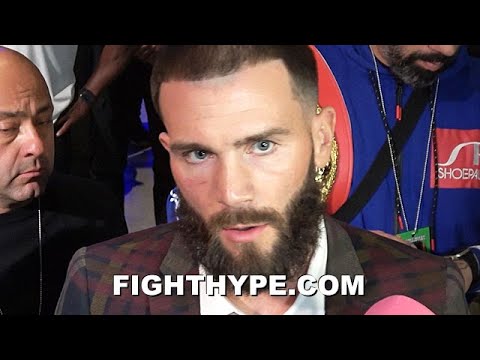