Vitor Belfort may have finished off the career of former heavyweight champion Evander Holyfield in destroying him by a first round knockout on Saturday night in their main event on Triller PPV at the Seminole Hard Rock Hotel & Casino in Hollywood, Floria.

Belfort, 44, started off looking cautious in the opening seconds of first round, jabbing the 58-year-old Holyfield. However, once Belfort noticed how slow and feeble Holyfield appeared, he tore him into him with power shots, dropping him with a big left hand. 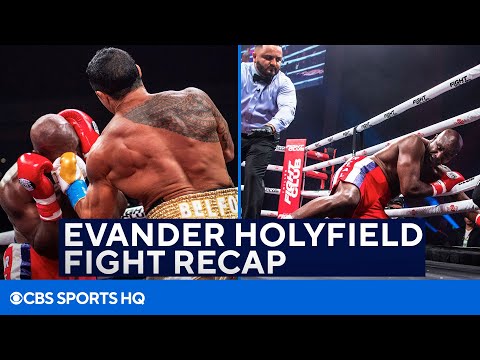 After Holyfield arose from the canvas, Belfort unloaded with a blizzard of punches, causing the referee to step in and stop the fight.

Holyfield’s balance was all over the place,  and he looked like he was half-stunned even before the bell rang to start the action. This was too easy for Belfort, and he’s not because he’s a great fighter as a boxer.

Had this been even a fringe contender tonight, Belfort would have been smashed. He’s not a great boxer, but he didn’t need to be because he was facing a very old Holyfield, who is pushing 60.

Physically, Holyfield looked in great shape for a fighter 58, but he was every bit his age when it came actually to fight. You could have dragged a 58-year-old man from the audience, and he would have gotten the same results.

The fight was over so fast that the boxing fans that paid $50 at home likely weren’t too happy at the result. It didn’t resemble a fight.

You got to second guess Holyfield’s decision to step in and replace Oscar De La Hoya when he pulled out of the fight two weeks ago because of COVID-19.

Before agreeing to replace De La Hoya, Holyfield looked at a huge money trilogy match against Mike Tyson. Holyfield didn’t need to take this risky fight to get the match with Tyson, but he chose to take it.

In hindsight, Holyfield should have rejected the offer to fight Belfort because the money he made tonight likely pales compared to what he would have made had he fought Tyson.

After tonight’s defeat, Holyfield can forget about a fight with Tyson because it won’t sell to the boxing public. Even if they call it an exhibition match, it still won’t sell.

Hopefully, this is the end for Holyfield because he doesn’t belong inside the ring with ANYBODY, even an old MMA guy, as we saw tonight.