Tony ‘Bomber’ Bellew wants to see welterweight contender Conor Benn take a step up against Josh Kelly and then David Avanesyan if he’s successful in his 12-round headliner fight this Saturday, July 31st, against the always tough Adrian Granados at the Matchroom Fight Camp in Brentwood, Essex.

Interestingly, Bellew believes Benn will be ready to face Avanesyan in 12 to 18 months. That not be if his promoters at Matchroom Boxing don’t step him up against fighters near the level of Avanesyan.

You certainly can’t say that Granados or Kelly will prepare Benn for the type of pressure he’ll be dealing with against Avanesyan.

Matchroom has a little money-making machine in Benn, and they might not want Avanesyan to wreck their revenue stream the way he did with Kelly last February.

Throwing Benn in with Avanesyan after Granados and Kelly sound like a bad idea. Right now, Benn fights more like YouTuber Jake Paul than he does a professional fighter, and he’s going to be in for a world of hurt if/when he does step up against Avanesyan.

Bellew is looking out for the 24-year-old Benn’s welfare and doesn’t want to rush into a dangerous fight against Errol Spence Jr or Terence Crawford before he’s adequately prepared.

Benn (18-0, 12 KOs) looks good right now, but he’s not ready for Spence, Crawford, Shawn Porter, or Keith Thurman. The way Benn fights in an all-out style with his flurries would get him in trouble against those fighters.

You can’t fight that way against them because they’ll time him and catch him with a shot in between. That’s was what Cedrick Peynaud did to Benn in dropping him twice and arguably beating him in their first fight in 2017.

Although Benn was given a six round win, he definitely deserved a one-sided loss against Peynaud.

We don’t know if Kelly is still planning on continuing his career, as he hasn’t fought since he was bloodied & battered by Avanesyan (27-3-1, 15 KOs) in a sixth round knockout loss last February.

The battering that Kelly took against Avanesyan on top of his controversial 10 round draw against Ray Robinson in June 2019 may have discouraged him.

“I love the Josh Kelly fight for Benn, and I think it’s a fight that fans would also pay to see,” buzzed Bellew when speaking exclusively to DAZN. “Let’s not forget, before he lost to Avanesyan. Him against Conor with the winner pushing on would be a brilliant fight to make.” 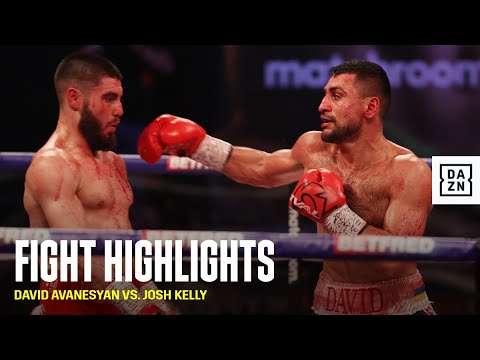 “If Benn can be successful against Kelly, then the natural fight to make would be against Avanesyan. I think that’s a fight he’ll be ready for in the next 12-18 months.,” said Bellew.

Kelly is a winnable fight but not an easy one for Benn. There’s a big speed difference between the two, and Benn will need to eat many big shots that he doesn’t see coming from Kelly in the first two rounds.

Once Kelly starts gassing out, Benn should take control of the fight to score a knockout eventually. It will be a bad omen for Benn if he’s dragged the 12 round distance against Kelly.

If Benn is forced to go 12 rounds to beat Kelly, it would be a rotten idea for Matchroom to toss him into the ring with Avanesyan in his next fight.

“It’s okay wanting to push him to the top against the big names like Terence Crawford and Errol Spence, but we need to remember that he’s still a young fighter,” said Bellew about Benn.

No one is pushing for Benn to fight Crawford or Spence. That’s crazy. It’s Benn who mentioned wanting to fight Shawn Porter and Amir Khan. Fighting Porter would be a dreadful idea for Benn.