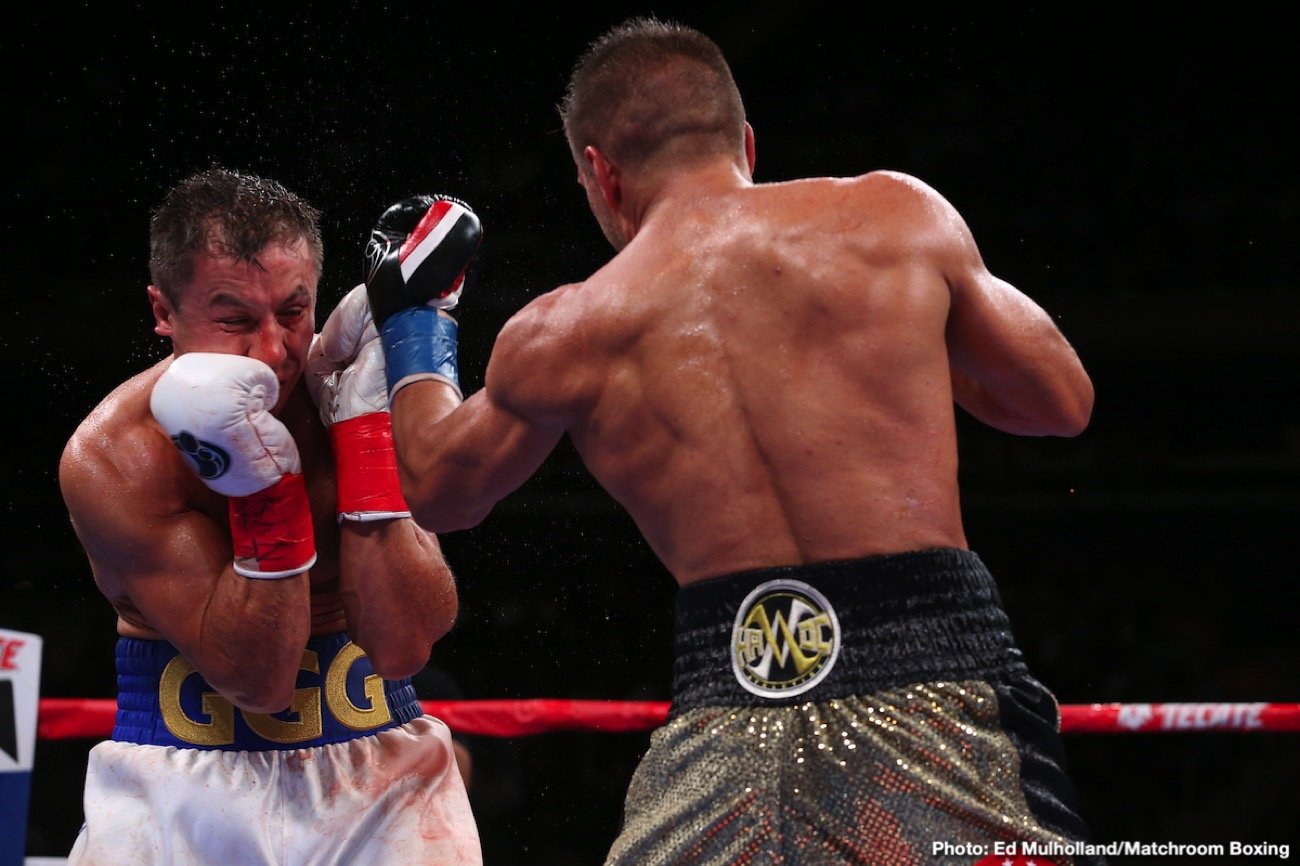 Gennady Golovkin (40-1-1, 35 KOs) surprised and disappointed a lot of fans this week when he revealed that he plans on defending his IBF middleweight title against his mandatory Kamil Szeremeta next rather than facing Canelo Alvarez in a trilogy match.

The question is, should DAZN pay Golovkin the full price if he insists on facing Szeremeta rather than a fighter that will help bring in new subscribers? If Golovkin insists on facing Szeremeta, should DAZN give him half of what they would normally have paid him if he were facing a well-known fighter like Canelo, Jermall Charlo, or Demetrius Andrade?

If Golovkin took that fight with Canelo, it would help DAZN bring back many lost subscribers, who bailed out after the pandemic sidelined boxing.

By choosing little known Szeremeta (21-0, 5 KOs) as his next fight, Golovkin is picking the wrong time for him to milk his IBF title against a weak opponent. More importantly, Golovkin’s decision to face Szeremeta rather than Golovkin will likely greatly impact the number of people that subscribe t DAZN.

So instead of a massive amount of fans jumping on board DAZN to see Canelo face Golovkin a third time, many fans will likely choose to stay away while GGG takes a soft opponent in 30-year-old Szeremeta in another tuneup level fight. The thing is, Golovkin already had a tuneup last year in his mismatch against unknown 35-year-old Steve Roll.

If Golovkin faces Szeremeta next, that will make two out of his last three fight would be tuneups. GGG’s previous match was against Sergiy Derevyanchenko last October, and that wasn’t a tuneup. But that the same time, it wasn’t the fight that the boxing fans wanted to see. They wanted to see Golovkin fight Canelo or WBO champion Demetrius Andrade.

“We start with some GGG-Canelo news. Speaking with Sports Illustrated about the rest of his plans for 2020, Gennadiy Golovkin says he will have his scheduled fight against Kamil Szeremeta BEFORE his third battle with Canelo Alvarez,” said Chris Mannix to DAZN. “GGG explained, ‘I made a commitment before this situation with the coronavirus happened. I’m talking about my fight with Szeremeta. I intend on keeping my word. Once the situation changes and everything is back to normal, I intend on having this first fight [against Szeremeta].’ Is this the right move for GGG?”

Golovkin couldn’t have picked a worse time for him to be insisting on facing Szeremeta. DAZN really needs Golovkin to take meaningful fights now more than ever. They’re paying him a lot of money, and they obviously want to see quality match-ups and not mismatches against unknown fighters that U.S fans have never heard of. 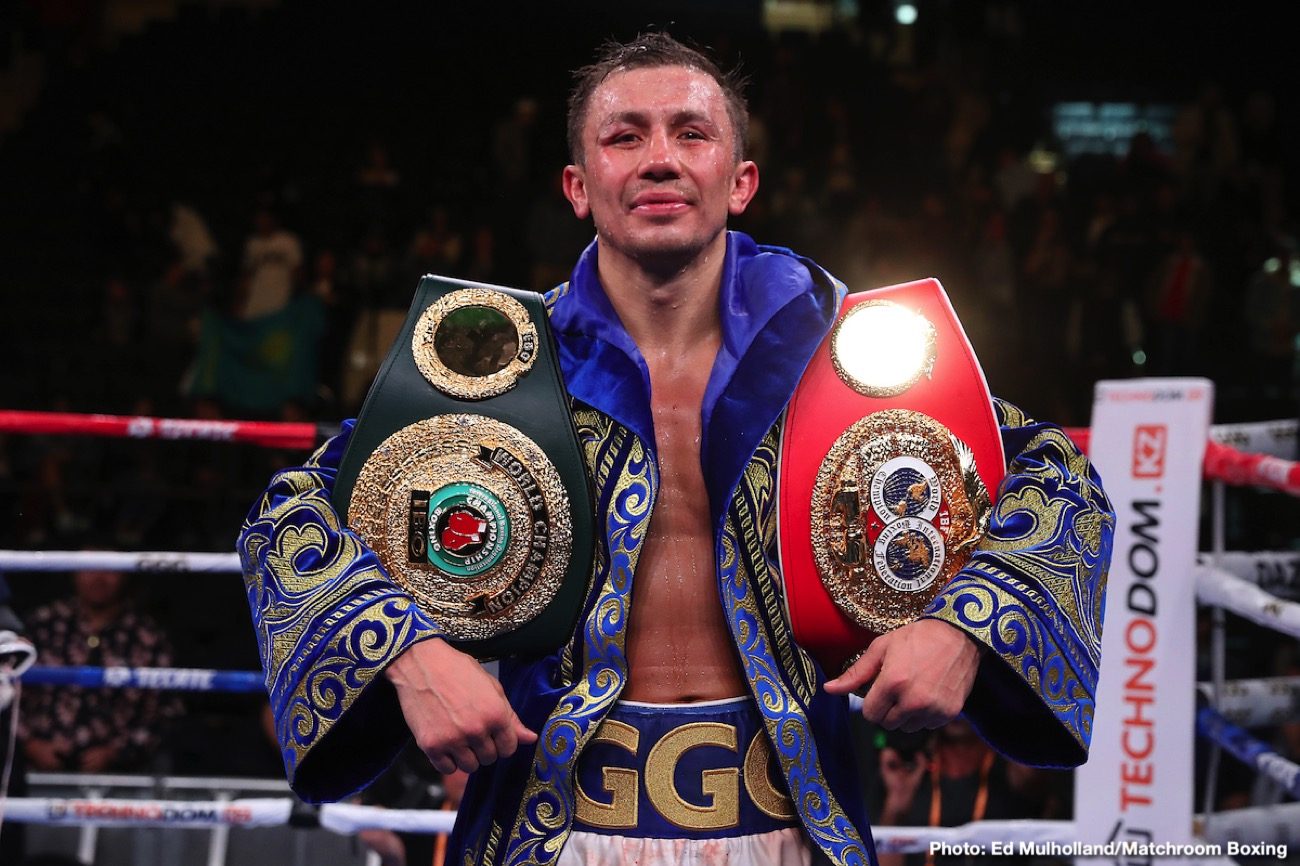 “It’s a fine line, but I got to speak as a fighter. Yes, it’s going to be a year out of the ring,” said Sergio Mora in defending Golovkin’s decision to take the tuneup fight with Szeremeta rather than face Canelo next.

“He wants to get the juices flowing as a fighter, yes. But thinking and speaking as a fan, NO. We want this trilogy. GGG is going to be 38-years-old. He’s going to be a year inactive out of the ring.

“If this fight [between Canelo and Golovkin] doesn’t happen this year, we don’t know how the pandemic is going effect their bodies mentally, and psychologically. As a 38-year-old, we can vouch for that. Yeah, I want to see the trilogy, and I want it to happen right away. I understand GGG. It’s the right move for him and Johnathon Banks.”

There’s obviously a time and a place for Golovkin to take soft fights against guys like Szeremeta, and this is definitely not the time in 2020. It’s important that all fighters try and face the best competition they can when boxing restarts.

Should Golovkin take a pay-cut in facing Szeremeta instead of Canelo?

“The better part of the last two years, Golovkin has been clambering for that third fight with Canelo,” said Mannix. “What happened in that last year-plus that changed all that? Is it because he didn’t look great in 2019 in his wins over Steve Rolls and Sergiy Derevyanchenko?

“Is it because he only had two fights with Johnathon Banks, and he wants to get another one under his belt before he wants to take on the challenge that is Canelo Alvarez? Either way, throw out the should, the could stuff for Golovkin.

“The question is, does DAZN want to pay for it? Golovkin has a deal with DAZN that pays him a lot of money every time he fights. And DAZN didn’t sign Golovkin to match him up with Steve Rolls, Derevyanchenko, and maybe Kamil Szeremeta.

“They signed him to fight Canelo, to fight Demetrius Andrade, and to fight the top middleweights in the world. So looking at it from a business perspective, if Golovkin wants to fight Szeremeta, he should be willing to take a steep discount on what you’ve been getting paid to do it.”

It’s unclear whether DAZN can cut Golovkin’s pay for his contract if he chooses to face guys that they don’t feel brings value and subscribers. If DAZN does have the power to reduce the amount they pay Golovkin, it’ll be interesting to see if they choose to go that route. 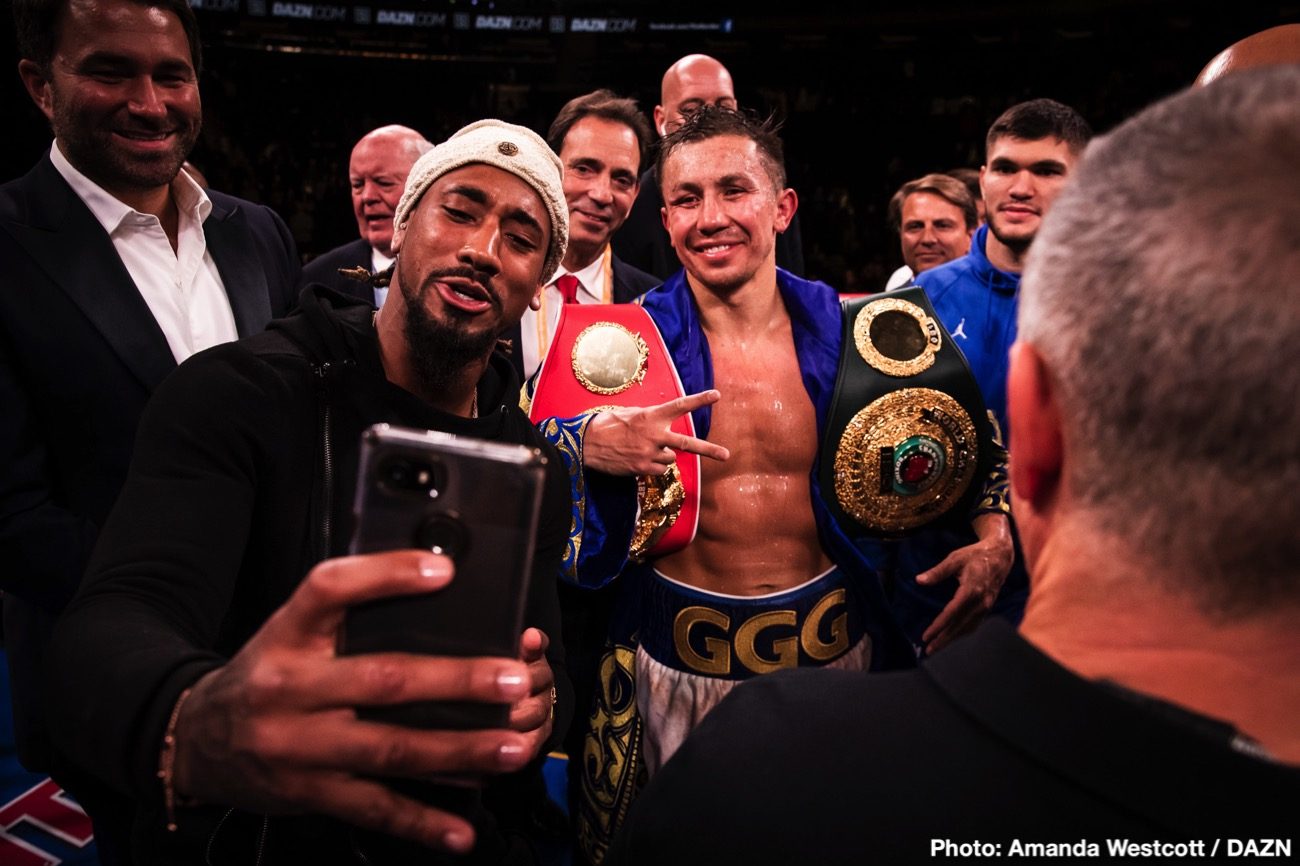 Has Golovkin lost his hunger?

“When you’re sleeping in silk pajamas, as some famous fighter said, it’s a lot harder to do that. Golovkin, I’m not saying he doesn’t have the hunger to want to prove himself, but now he has choices. He doesn’t have to take that fight right away against Canelo.”

For fans that have grown accustomed to seeing Golovkin push hard for his fights with Canelo, it’s odd to see him pulling away and going in the path of least resistance to fight an arguably lesser fighter in Szeremeta. Has Golovkin lost his hunger? Did the big contract DAZN gave Golovkin cause him to lose his motivation?

Canelo vs. GGG 3 = a subscription driver for DAZN

“Why are we not agreeing on this? This is insane to me,” said Mannix on Golovkin, wanting to take an easy fight against Szeremeta rather than face Canelo. “You fight Canelo Alvarez, that’s a subscription driver in the case of DAZN.

“It’s a pay-per-view level fight, as it was on HBO. Szeremeta is barely an HBO Championship level fight and one of those fights that Golovkin had to take, a Willie Monroe-type of fight back in the day when no one would fight him.

“Canelo Alvarez has already agreed to fight him. Here’s the deal. You face Canelo and collect a massive check, or you face Szeremeta, and you find someone else to pay you for it, which nobody will. You take your chances there.”

Does DAZN have the option to tell Golovkin to go shop his fight with Szeremeta elsewhere, or are they stuck putting this fight on whether they want to or not? One of the networks would put the Golovkin vs. Szeremeta fight on, but whether GGG gets the same kind of money he would get with DAZN is the unknown. They’re paying him a lot of money, and Szeremeta is a poor fight that likely won’t bring in huge ratings for another network. 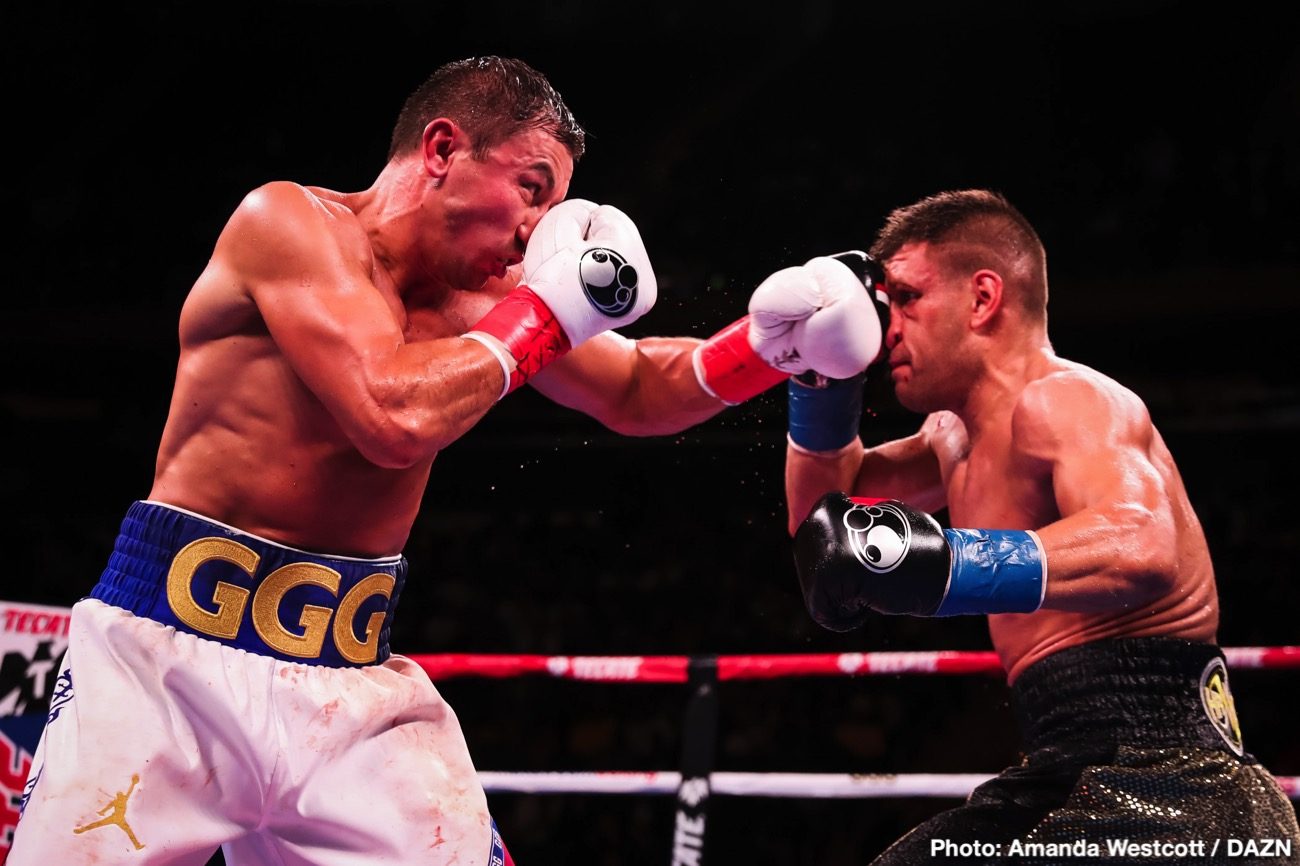 Golovkin should take Canelo fight for the sake of boxing

“I get what Golovkin is thinking and feeling. That’s just the way it is. But for you and for us, for the world and for the sake of boxing, make this trilogy happen, Golovkin. Please.”

In an ideal world, Golovkin would take the fight with Canelo in 2020, but he’s had it tough in his two fights with him. Golovkin has fought the wrong way in BOTH fights against Canelo, and doesn’t seem to be able to grasp what he needs to do for him to beat the Mexican star. It’s clear how Golovkin needs to fight Canelo, but he doesn’t seem to have the engine or the willingness to endure the pain of fighting the right way.

To beat Canelo, Golovkin must fight the way Marvin Hagler used to. That means attack nonstop. What we’ve been seeing from Golovkin is him staying on the outside, throwing jabs instead of going after Canelo the way someone like Hagler would have done. Hagler would have been relentless against Canelo and made him work hard every second. Golovkin hasn’t done that. He’s fought conservatively, and not surprisingly, he’s failed to beat Canelo.