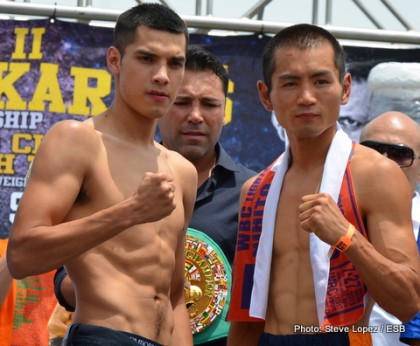 The co-main event for Knockout Kings II will feature Texas’ own Omar “Panterita” Figueroa against Japan’s own Nihito Arakawa.

Figueroa is expected to be the fighter that Texas will be cheering on during Saturday night as he’s the one with the momentum between the two fighters. Arakawa is seemingly unknown to the mainstream fan. Could this fight be more competitive than we think? Team Arakawa certainly thinks so.

I had the opportunity ask both Figueroa and Team Arakawa some questions to shed some background and expectations to the viewers that don’t know much about them. Figueroa, though in his early twenties, showed maturity for his age as a fighter and person. Team Arakawa showed optimism for the upcoming bout as they recognized their opponent’s strengths and opportunities.

Steve Lopez: “How does it feel to be back in San Antonio, TX this year? Another big crowd. Perhaps higher expectations this time?”

Omar Figueroa: “I think they expect me to go in there and perform the way I always do. That’s something they should never worry about. I love fighting. I love getting hit as much as I love hitting people. So, if I get hit in there, they don’t have to worry about me cowering down. It’s only going to pump me up even more and I’ll give them a better fight.”

Steve Lopez: “You’re one of the young, up-and-coming, soon-to-be champions. Are you still learning in the ring, in training camps, especially with Joel Diaz in your corner?”

Omar Figueroa: “Yes, you never stop learning. The moment you stop learning is the moment you stop learning as a person. So, I don’t think there’s a limit to how much you can learn, especially in boxing. There’s so many different styles out there, so many different things that happen in the right. You just keep evolving. You keep adapting, learning and growing. Getting stronger, getting quicker, getting smarter. That’s what we keep trying to do. Getting better and better.”

Steve Lopez: “One of the things that differentiate you from other fighters is that you used to attend Texas A&M University in College Station, TX. School, for now, is on hold it seems. Do you ever plan on going back to school after you accomplish everything you want in the ring?”

Omar Figueroa: “You know, I’ve thought about that I lot because I fell in love with A&M. I regret leaving school. But, judging from where my career is going, I feel like I made the right decision. But then again, if you think about it, what’s the purpose of school? To succeed in life. I feel if I’m doing that without having to go to school, then I kind of found a loophole in the system. So, maybe…I wouldn’t find. But then again, I feel that everything is falling into place. My timeline for school has already passed.”

Steve Lopez: “Last few words for your fans and young fighters who want to get far like you have?”

Omar Figueroa:: “You have to believe in yourself and you have to be realistic. You can’t be chasing something that’s never going to happen or the other way around. You have to realize what you have and if you have it, go for it! If not, really think about it because boxing is a very dangerous sport. It could leave you ruined for other things in life, so you have to be careful about that. Make sure you make the right decisions.”

Steve Lopez: “To the fans of the sport that do not know much about Nihito Arakawa, what can you tell them as far as what to expect with Figueroa?”

Team Arakawa (through interpreter): “Nihito is a very technical boxer. He has a lot of knockouts on his record. Not necessarily from one-punch power, but it’s very technical that he picks you apart, round by round. He makes people quit.”

Steve Lopez: “What are your thoughts on Figueroa as a fighter?”

Team Arakawa (through interpreter): “Figueroa, the boy has got power, no doubt about it. Everyone can see that. What I’m more worried about is his technique, the way he throws his punches. The looping punches as opposed to the straight compact ones that hit right on the mark, so that’s going to be interesting. I have no doubt that Nihito is going to land on him. What I want to know is if he can make him back up, if he can discourage him.”

Steve Lopez: “Right. Right now, Figueroa is the one with the momentum. Everyone is expecting him to go through Nihito.”

Steve Lopez: “I did see a little bit of Nihito on YouTube. I can see how this fight may try to steal the show.”

Team Arakawa (through interpreter): “Yes, it could. I want to see how Nihito’s punches affect him and if Nihito can get to the mark first. If Nihito discourages him, it’s going to be a long night for him, too.”

Steve Lopez: “Good luck and hope to see an exciting match on Saturday.”