“This is a message to all my fans and haters, for all those wanting to see me knock out David Haye on behalf of the nation and all those who want to see me put out of my misery,” Tyson said.

“The fight for February 8th is completely signed and sealed from both of us.

“I’m pleased that the fight is on again for February 8th – it’s going to be bigger this time, better, more people watching and I’m going to take pleasure in smashing his face in a bit more. David Haye and Tyson Fury will now meet on February 8th of next year, various media reports have confirmed. The fight, postponed due to Haye suffering a cut eye in sparring, will still take place at The Phones 4U Arena in Manchester.

Haye is delighted with the news:

“I was absolutely devastated this weekend, and felt as though I’d let a lot of people down. But now, with this new date, I couldn’t be happier,” Haye said. “My fans will still get the chance to see what they all wanted to see this weekend – they’ll get to see Tyson Fury sparked out in spectacular fashion. Fury might start to get brave now that he’s received a stay of execution – and he might call me names and accuse me of ducking him – but that will all be short-lived, I can promise you.

David Haye (26-2, 24 KO’s) says he’s close to arranging a rescheduled date for him and unbeaten Tyson Fury (21-0. 15 KO’s) to fight. Haye was cut above his left eye in sparring this past week making it necessary for him to postpone his scheduled September 28th fight against the 6’9” Fury.

If fans didn’t know already, September 28th’s all-British clash between Tyson Fury and David Haye has been postponed due to Haye suffering a cut above his left eye during training.

Haye suffered the injury on Friday evening and will require six stitches. According to reports, the stitches will remain in place for five to seven days and Haye is waiting on further medical advice when it comes to when he will be able to return to action. With the news today about former WBA heavyweight champion David Haye suffering a cut during sparring for his fight next week against Tyson Fury, it means that the fight will be postponed or possibly be even cancelled depending on whether Team Fury still wants to reschedule. However, it might be in Fury’s best interest to forget about facing Haye altogether, because it’s not as if Fury stood a real chance at winning the fight.

The odds were heavily in Haye’s favor to the point where it was hardly worth it for Fury to take the fight. Let’s be honest here; does anyone really think that the 6’9″, fragile-chinned Fury had any actual chance to beat Haye in this fight?

Fury doesn’t have the power, speed or the chin to have any chance at beating a big puncher like Haye. That’s why this injury might actually be the best thing for Fury because it let’s him move on and save face at the same time. I mean, Fury now has a ready-made excuse for why he shouldn’t have to face Haye now, and no one will blame him if he moves on and resumes fighting the likes of Martin Rogan, Kevin Johnson and Vinny Maddalone-types. 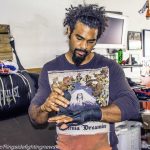 David Haye plans to destroy Tyson Fury on September 28 in Manchester, and believes his roster of sparring partners would do a similar job, too. Haye on his website Hayemaker.com:

“I have no doubt whatsoever that the guys brought over for me to spar would do a number on Fury in a fight,” he said.… read full article “David Haye: “Each of my sparring partners would make Fury look silly in a fight”” ‘Boxing is dead’ is a term I read, and heard, frequently in recent years. If any truth lay in that statement, 2013 proved to be boxing’s resuurection. Drama, brutality, courage and the art of boxing, 2013 provided every element, when combined, makes this the greatest sport in the world.