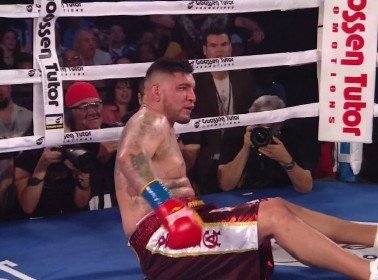 ESPN has reportedly bought the rights to televised the rematch between heavyweights Chris Arreola (36-3, 31 KO’s) and Bermane Stiverne (23-1-1, 20 KO’s) on May 10th in their fight for the vacant WBC heavyweight title at a still to be determined venue. For boxing fans this is a big deal because they won’t need an expensive premium channel like HBO or Showtime to see the fight now that ESPN will televise it.

While it sounds nice that ESPN was able to purchase the fight to televise on their network, it gives you an idea of how much interest HBO and Showtime had in televising the fight. Believe me, if they had wanted to show the fight, they would have purchased it.

So after many many years, we will finally crown a world heavyweight champion not named Klitschko! Vitali, who’s been the WBC title holder since 2008, has stepped down to pursue his politics aspirations (not sure if he’s still happy with his decisions considering what is happening right now in Ukraine but I won’t dive in that subject). We will now get to see Bermane ¨B-Ware¨ Stiverne and Chris ¨The Nightmare¨ Arreola battle it out for the now vacant belt. Schaefer said this at the post-fight press conference last Saturday following Deontay’s 4th round TKO win over Nicolai Firtha “Deontay is right there at the top 2 or 3 ratings with the WBC. With the news we got last week that Vitali Klitschko is going to be running for the president of the Ukraine, I anticipate that the [WBC] title will become vacant.