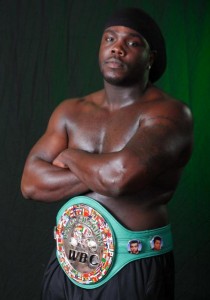 Klitsckko hasn’t fought in nearly a year, when he defeated Manuel Charr (TKO4) on September 8, 2013; his last mandatory defense was almost two years ago, on Sept. 10, 2011 against Dereck Chisora (DEC12).

Stiverne’s manager, Camille Estephan, CEO of Eye Of The Tiger Management (EOTTM), believes the WBC should either strip Klitschko of his belt, letting Stiverne fight the highest-ranking, available contender for the vacant WBC title, or name Stiverne as its Interim heavyweight champion.

“Klitschko has been a great champion and ambassador of boxing,” Estephan commented, “but a true world champion has to defend his title in the ring, not keep it because of politics. He won’t fight until 2014 but he should be stripped for not defending his title, or step aside to allow Bermane to fight for the Interim belt. The heavyweight division is the flagship of boxing but, we haven’t had one world heavyweight champion because the Klitschko brothers won’t fight each other, of course, but Vitali not defending his title adds insult to the heavyweight division.

“He hasn’t defended his title in almost a year and now it’ll be much longer if we have to wait for the WBC to even make a decision about the status of its heavyweight title. This is totally unacceptable. The credibility of the sport is at stake. Bermane has done everything required and more to get his world title shot. Two winning title-eliminators, three postponed purse bids, and now this. Why should he continue to be penalized for Vitali not defending his belt? I expect the WBC Board of Governors to do the right thing, now, and immediately. We’ve waited long enough!”