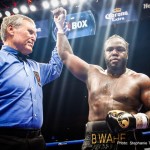 ISSUED BY WBC BOARD OF GOVERNORS

On November 11, 2016 VADA notified the WBC that Bermane Stiverne’s anti-doping test taken from his November 4, 2016 sample (the “Test”) pursuant to the WBC Clean Boxing Program (“CPB”) yielded an adverse finding for the banned substance methylhexaneamine (also known as dimethyamylamine or “DMAA”). 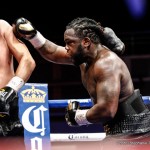 The final two months of 2016 are shaping up to be very eventful in boxing, perhaps making up for what has generally been viewed as a pretty lacklustre year overall. In particular, the heavyweight division has been slow and lacking in big fights, due of course to the unfortunate circumstances with troubled, now former champ Tyson Fury.

But now, with interesting title fights such as Lucas Browne-Shannon Briggs, Joseph Parker-Andy Ruiz Jnr and Wladimir Klitschko-Anthony Joshua either set or in the works (the Joshua-Klitschko fight pencilled in for next March – providing AJ beats Eric Molina on December 10, this being an interesting second defence for the reigning IBF champ) the division is moving again.

As fight fans have probably read by now, Alexander Povetkin’s team won the purse bid for the clash for the vacant interim WBC title, against Bermane Stiverne. This, most people think, means the fight will almost certainly be staged somewhere in Russia. We should have seen “real” WBC heavyweight champ Deontay Wilder face Povetkin in Russia this summer, only for the fight to fall apart due to well-documented and disappointing reasons.

Now, with an injured Wilder awaiting the Povetkin-Stiverne winner, former WBC boss “B-Ware” faces the daunting task of taking the long trip to Russia to face Povetkin. It could very well be a big ask of Stiverne, now aged 37 (he’ll turn 38 in November) to come home with the interim version of his former belt. 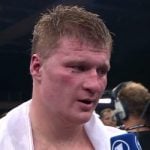 A purse offer was held today in New York for the WBC heavyweight interim championship bout between Alexander Povetkin and Bermane Stiverne. The winning promoter was World of Boxing with a bid of $3,165,000 dollars.

The purse offer for the mandatory defense of WBC heavyweight silver champion Johann Duhaupas against Carlos Takam was also held today in New York. The winning promoter was OPI2000, Salvatore and Christian Cherchi, with a bid of $235,000 dollars. 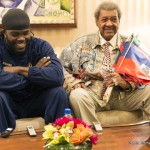 The top two ranked heavyweights by the World Boxing Council (WBC), No. 1 Alexander Povetkin and No. 2 Bermane Stiverne, have recently been ordered to fight for the interim WBC heavyweight title. The winner will become the interim champion and will defend the title until champion Deontay Wilder, is ready to come back from the injuries sustained in July.

“I would like to thank Don King and the honorable Mauricio Sulaiman of the WBC for giving me this opportunity to fight for the heavyweight title once again,” said Stiverne. “For the betterment of boxing in general, and the heavyweight division in particular, I plan to knock Povetkin out and bring this title to America. Then I will get my revenge against Wilder, when he is ready.” 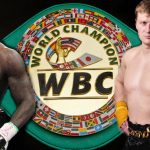 I. BACKGROUND – The WBC heavyweight championship of the world was scheduled to be contested on May 21, 2016 in Russia. The Bout was Champion Deontay Wilder’s mandatory defense of his title against Mandatory Challenger Alexander Povetkin. The Bout was the result of a purse bid the WBC conducted and which promoter World of Boxing won.

On May 13, 2016 VADA reported to the WBC that Alexander Povetkin’s anti-doping test that had taken from his April 27, 2016 sample pursuant to the WBC Clean Boxing Program yielded an adverse finding for the banned substance Meldonium. 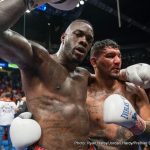 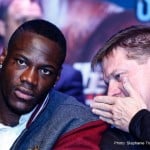 A lawsuit seeking damages for defamation and breach of contract was filed today by boxer Aleksandr Povetkin and his promoter Andrey Ryabinsky, President of World of Boxing promotional firm . The complaint was lodged today in the United States District Court for the Southern District of New York. The defendants are world super heavyweight boxing champion Deontay Wilder, DiBella Entertainment and its CEO, Lou DiBella. The claim is for at least $34.5 mln.