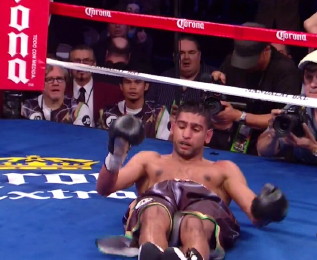 By James Slater: Well, who saw that coming?! Danny Garcia, not known as an out and out banger, totally smashed Amir Khan last night in Las Vegas, sending the British superstar crashing to the canvas with a left hook out of nowhere in the 3rd-round. Bleeding and being out-boxed, the man known as “Swift” suddenly exploded and took full advantage of Khan’s suspect jaw.

Khan, showing amazing heart, tried his best to dig in and battle back on rubbery legs – and what a round that 4th-round really was – but he had gone and there was no chance of recovery. The same thing could now be argued about Khan’s boxing career; certainly the critics are saying Khan is finished and should retire. It will be a long road back, that’s for sure.

Khan is never going to acquire a great chin, and even though there is absolutely nothing wrong with his heart and guts, these attributes will not be enough. Khan came back from his shocking 1st-round KO loss to Breidis Prescott, and his controversial “loss” to Lamont Peterson cannot be held against him (Khan of course, was just given back the WBA 140-pound belt he was unfairly relieved of back in December; only to hold it, as things turned out, for a few days) but can the 25-year-old possibly climb back to the top again?

Too aggressive and reckless for his own good (or for any fighter with a suspect chin), Khan attacked, attacked, attacked last night, forgetting about what might come back at him. In the 3rd, Garcia made Khan pay for underestimating his powerful left hook and the fight was as good as over. Khan’s best hope, in my opinion, is to go right back to basics and focus totally on his defensive skills and forget all about being a KO artist. When Khan does keep his composure and boxes smartly behind a tight defence, he can look great; it’s when his heart gets the better of him that things go wrong (as almost happened in the thrilling win Khan picked up over banger Marcos Maidana).

Khan should have a good break, then go back to the gym and sharpen his defensive skills and then take one or even two tune-up fights against lower level contenders, then, having put a couple of good, learning points wins under his belt, he could go for another title. Khan should certainly forget all about an immediate return with Garcia.

It will all be down to how much Khan wants it, and it could be at least a year before he’s ready to once again threaten the elite fighters, and maybe Khan, who has said he will retire ate age 28, will not be ready to start over and work his way back.

Right now, as the deafening headlines are screaming, Khan’s career is in tatters. We saw a new star born last night at The Mandalay Bay, and we may also have seen a career ruined.

On a side note: maybe the beast that is Ajose Olusegun, who has been waiting and waiting for his earned shot a

Next post: Selcuk Aydin: Guerrero won’t be as strong as he was at the lighter weights