The Conundrum of Boxing 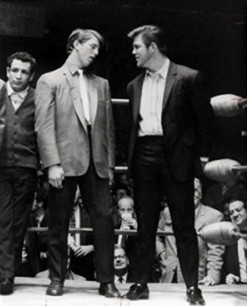 He’s living over there, but really he’s dead….And nobody cares. Frankly, nobody ever will care. But I care.

I was about to write a time tunnel piece on a prime Hagler vs. a prime Hopkins, but then I reviewed the recently released documentary “After the Last Round” and that film just stopped me cold. It also scared the hell out of me, particularly juxtaposed against the work and research I have been doing on my series, “The Darker Side of Boxing,” because it seemed to validate every suspicion I have.

In the film, the sight of the Moyer brothers, Denny and Phil, walking down a path holding each other’s hands and both wearing plastic helmets to protect them from a fall was both poignant and horrific. The sight of their 90 year old father Harry Moyer feeding them was indelible.

Denny, the first ever world light-middleweight champion, has since passed away in a nursing home in his home city of Portland, Oregon, on June 30. He was 70 and had suffered pugilistica dementia for many years. Phil, totally incapacitated with the malady, remains in the same nursing home enshrouded in a fog of living death.

Amazingly, both brothers held victories over Sugar Ray Robinson. I watched both fight on television on many a Friday night back in the day. During 1960, Denny Moyer went 4-2 while fighting the likes of Pat Lowry, Tony DeMarco, Emile Griffith (twice), Benny “Kid “‘Paret, and Jorge Fernandez. Later I recall watching a young and hungry Vito Antuofermo (24-1) brutalize an aging Denny (95-34-10) over 10 savage rounds in the Garden in 1974. I also recall how Phil Moyer beat a guy with an 88-30-10 record in only his 5th pro fight.

On top of this, watching Roy Jones recently be rendered unconscious (once again) by someone he would have knocked out in his prime was personally painful. Ironically, the film showed Jones as an example of someone dishing out brutal punishment.

Finally, having recently written a lengthy article titled “Remembering Greg Page” for a boxing magazine, my pendulum of love and hate is once again moving and the move is one that is challenging my love for boxing. This has happened before and the passion always returned, but right now it’s just not there. In fact, if boxing were banned tomorrow, I now ask myself, could I live with it? For the first time, I hesitate with an answer.

Some call boxing a barbaric sport where the sole objective is to concuss an opponent without killing him. Others refer to it as a “noble art”—a sweet science which is a beautiful sight to behold. As an unabashed aficionado, I always try to keep these two realities in proper perspective. However, one thing I no longer will accept is the manner in which most newscasters or boxing writers continue to totally ignore the long term damage that boxing can do to both the participants and their families. Oh, I get why the establishment of booking agents, promoters, managers, and trainers ignore this, not to mention the self-serving parasitic alphabet soup governing bodies.

As a minimum, we need to write about the dangers implications of brain injuries. Anyone who has had an issue with a brain injury (there is no such thing as a minor one) should NEVER be allowed back in the ring. The Las Vegas Commission gets this. Joe Mesi finally got it. Edwin Valero did not, but that became academic. In the aforementioned documentary, they showed how one kid, a great all-around athlete named Tony Bruno, was given an aspirin by a friend after he complained of headaches after a tough sparing match with his best buddy. He then sparred some more the next day. He is now seriously disabled but is managing to cope. Watching this segment was enough to make a grown person cry. The book, Dying to Fight: the Tony Bruno Story details Tony’s valiant effort to cope.

More than likely, I will revert to the following quote that always grounds me, but right now I need to rethink things. And if that’s what the documentary was supposed to do, it succeeded.

……..It is not the critic who counts; not the man who points out how the strong man stumbled, or where the doer of deeds could have done them better. The credit belongs to the man who is actually in the arena, whose face is marred by dust and sweat and blood; who strives valiantly; who errs and comes up short again and again; who knows the great enthusiasms, the great devotions; who spends himself in a worthy cause; who at the best, knows in the end the triumph of high achievement and who, at the worst, if he fails, at least fails while daring greatly, so that his place shall never be with those timid souls who know neither victory or defeat…….

Postscript: “After the Last Round” can be obtained through The Retired Boxers Foundation (RetiredBoxers.com). (It focuses on the risks of boxing and how it affects families.

Next post: Edison Miranda Back As A Light-Heavyweight On Saturday, “Pantera” Still Believes!

Previous post: Bernard Hopkins Got The Chance To Engage Pascal In A Rematch; These Guys Weren’t So Lucky!

Boxing News → The Conundrum of Boxing