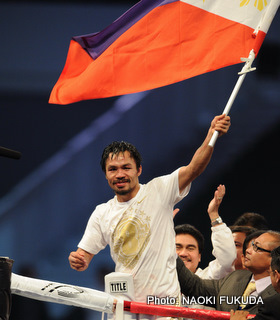 By James Slater: Though, as he himself later admitted, he had the odd sticky patch last night during his fabulous points win over an unimaginably game Antonio Margarito, pound-for-pound king Manny Pacquiao again proved he is one of the greatest fighters in history. The non-stop fighting machine was way too fast, way too powerful and way too good for the tough Mexican, and the one-sided beating (as the fight became after the 8th-round at the latest) was hard to watch at times, for those people who like or admire Margarito, anyway.

Coming back from the odd time when he was hurt – by a body shot as he was on the ropes in the 6th-round most notably – Pac-Man got back to busting up “Tony’s” face and basically giving him the fiercest hiding of his entire career. As harsh as fight fans and the sport of boxing itself can be, and as deserving of a beating as Margarito was in the eyes of these fans due to how he infamously attempted to load his gloves (or at least his trainer attempted to, and may have done so successfully in previous fights before the Mosley affair of Jan. 2009) – last night’s pounding was one that was perversely enjoyable to watch.

Margarito’s bravery was admirable, but the sight of him being savaged, broken and beaten was just what his “haters” wanted to witness. In taking the kind of wicked punishment he did and refusing to fall, the Mexican may well have fought his last fight. The 32-year-old soaked up far more punches than he did when being stopped by Shane Mosley almost two years ago, and his battered body (and face) may not be seen in a ring again as a result. Some people may say good riddance, and such thinking may seem cruel, but whatever comes his way next, Margarito surely paid the price for his cheating last night..

But what next for the incredible Filipino superstar, the fighter who has now won “world” titles in an amazing eight weight classes?

Immediately after the fight that saw both gladiators give their all, talk turned towards the possibility of a Pacquiao-Floyd Mayweather fight. Again! Pac-Man, when asked about the fight, said “if the fight happens, good. But if not, I don’t need him.”

While trainer Freddie Roach went further, suggesting to Mayweather that he either “fights Manny now or retires.”

“After this great performance by Manny, Mayweather just has to put up or shut up now and move out of the country,” Roach said yesterday. “Let’s face it, Manny’s way above him at this point because I remember when he was ducking Margarito and he wouldn’t fight him either. If he doesn’t fight Manny now we know this guy should retire.”

And it’s true, Mayweather has to “do something,” as Roach insisted. To be a truly great fighter you have to fight the best available opposition and come out on top. Mayweather, though, did allegedly duck Margarito a few years back, and fans everywhere are sick of his playing around when it comes to the fight with Pacquiao. Okay, Mayweather has those legal issues hanging over his head right now, but once that is all sorted out he must surely be sensible and agree to get the fight on – a fight that would be massive and could even earn him somewhere in the region of $40 million.

But does “Money” really want it, or will he sidestep Manny the way he dodged “Tony?” The fans want to know, and they are also desperate to see what will happen if and when the two superb talents collide in the ring. Would the defensive-minded Mayweather wind up taking the kind of beating Margarito and all the rest have taken? Or would Floyd’s silky skills see to it that he cements his own legend?

It really would be some shock if we saw Mayweather’s face looking as busted up and as ravaged as Margarito’s did yesterday. But , if the two do actually fight, at some point Pacquiao’s lethally-fast fists will go to work on Mayweather’s head and body. For as quick at avoiding a shot as he is, no way could Mayweather hit and move and not get drawn into a fight with Pacquiao; not for a full 12-rounds. And there appears to be no way any welterweight out there is capable of halting the fiercely determined Pac-Man. Hit him and hurt him and the southpaw destroyer simply comes back at you with more intensity!