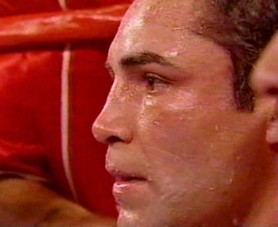 This is a published letter from a hardcore fight fan out there just like you! Every Wednesday ESB will feature a new letter containing various topics around the sport, and end with a response from Vivek Wallace himself! For those fight fans who don’t like what the average boxing scribe has to say, here’s your chance to SOUND OFF! Send all ‘Open Mic Fan Mail’ letters to wallace@boxing247.com. (Keep content short and concise, profanity free, and don’t hold back, the mic is yours)! Today’s letter comes to us from Arnel E. (Los Angeles, CA):

I’m sure by now you’ve read (or heard about) the interview transcript where Oscar De La Hoya spoke to a reporter and said in so many words that his plan is to use his company to take over the sport of boxing. I have always been a huge Oscar fan, and I think it takes a lot of guts on his part to not only say this publicly., but also give every ounce of energy and effort he has to doing it. I think Oscar’s company represents the way new-age promotions should be, and this is what the sport should be about. The biggest problem with the sport today is the fact that we have so many different organizations, so many different promoters, and so many different agendas, that nothing ever gets accomplished. Half of the promoters now days don’t even really do a good job showcasing their talents, and that only hurts the sport, too.

I see a lot of people giving Oscar flack about this effort, but I think any intelligent fight fan should support this move, because this is the only way that we’ll ever get to see the kind of non-stop action fight fans crave. These other promoters have been around forever, and in all of these years in and around the sport, they haven’t done anything but make and take money. I know you have been a proponent for a long time of one governing body, so I’m sure that you find this plan to be a good one. When I think about this possibility, I can’t really see any downside to it. UFC is thriving now as a result, and with a move like this, Oscar can get boxing back to where it belongs. I know you have spoken out on the drama in the sport in the past. I wanted to know if you feel the same as I do about this? I really see no way possible that it can’t work, and I think Oscar would be a great guy to manufacture this move. Your thoughts (on the topic)?

(RESPONSE TO OPEN LETTER BELOW)

I have always championed the cause of one official governing body to run the sport, but I think when you examine things a little closer, this scenario is a little different. From a supportive angle, I like the philosophy, in principle, coming from a person who is not only actively involved in the sport, but someone who has actively participated in the sport. I once had a brief conversation in passing with Floyd Mayweather jr. about promotions in the sport, and he gave a few talking points, saying the biggest problem with todays market is that the sport is run by (what he called) “guys who know money and a little management, separately, but not exactly the art of money management as an actual athlete”. His point was that when you look around the sport, there are a ton of men who coordinate and promote these events who have never lived the life of a boxer, and have very little interest in protecting the true rights of boxers.

There are a ton of promoters around the sport who would probably take offense to that, but truthfully, men like Floyd and Oscar who raise this point have a point. It’s a totally different thing to have an actual boxer, someone who has not only entered the ring to make the money, but sat at the negotiations table to help negotiate the money, represent you and your best interest, (as a boxer), based on them having total knowledge of the big picture. When I think about it from that angle, I think this is a totally good move, because it helps with representation. Now……that being said…….I don’t in any way, shape, or form, support monopoly’s, particuarly when it’s from what could be viewed as an ‘insider’. Despite the great job that Goldenboy Promotions has done, they have no more ability or right to “run the sport” than King, Arum, or any other promoter. The best example of my sentiment can be found in taking a brief glimpse at Summer of 2009.

Few talk about it, but when you think back to that particular time frame, it was one of the worst points in recent years in the sport. It was literally a full summer with no true action to rave about, which is horrible, considering the fact that a year prior we had Cotto/Margarito, and a ton of others. But, the reason the Summer of 2009 was so abysmal was because HBO had basically entrusted this very same Goldenboy Promotions to all of their television dates, and right before our eyes, everything that could go wrong went wrong. Kirkland was supposed to see action against Sergio Dzindziruk, however, he was arrested and sentenced to a brief jail stint. Hopkins was supposed to face Adamek, but that didn’t happen. Klitschko/Haye fell apart (negotiations), Mayweather/Marquez fell apart (due to FMW rib injury), and so forth. So, this was a perfect example of how dangerous it could be to allow one man, or one company run the table. The best thing the sport can do is establish one group, one commission, not-directly-involved with the sport, to actually run the sport. Some type of created and trusted brand.

Not an easy thing to do, obviously, but as long as it’s run by men within the sport, it will be corrupted by sport related agendas. In principle, philosophically, I agree with many things Oscar is trying to do. There should not be multiple organizations, champions, and set of rules. There should be ONE! Now, in contrast, despite there only needing to be one commission to run the sport, there should be a number of promoters to help generate and promote the talent. That field could use the diversity. Arum has made it his business to target Latin and Filipino fighters. Don King has worked with several kind, but predominantly Black. Shaw, DiBella, and Goosen/Tutor have worked with a mixed bag of talent, and so forth. Each of those men represent different demographics. That’s what makes it interesting. I couldn’t imagine boxing without great Mexican warriors, or proud Puerto Ricans, and so forth. So, we need the promotional diversity, but when it comes to the governing rules and the governing body, it’s like getting results for the end of a fight. THERE SHOULD ONLY BE ONE LEFT STANDING! (and no, Oscar isn’t that man)! I’m afraid this game isn’t MONOPOLY……for these athletes and their families, it’s their LIFE!