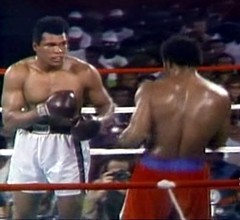 by James Slater – It’s almost certain that by reading the above title, even though it does not say which fight the article is about, fans will know which one it was that took place three and-a-half decades ago today. Simply an unforgettable fight, Muhammad Ali Vs. George Foreman was such an incredible boxing match on so many different levels.

Firstly, there was the huge sense of shock Ali sent around the world by upsetting the odds and the invincible-looking, all-conquering knockout artist. Then there was the way The Greatest won the fight – not by dancing, as he said he would beforehand – but by laying on the ropes and letting the lethal slugger punch himself out. The emergence of promoter Don King also proved to be a fascinating sidebar to the whole event, staged in the unlikely and groundbreaking setting of the African jungle. And then there was the aftermath: the sinking of how Ali, unfairly stripped of his title for not going to Vietnam in 1967, had reclaimed his throne..

In some ways, the epic interview/speech Ali gave immediately after the fight is as memorable as the actual contest and 8th-round KO.

“All of you bow, all of you crawl, all you suckers who write Ring magazine, Boxing Illustrated, never again make me an underdog; until I’m about 50-years-old – then you might get me,” Ali bellowed into the microphone held by Great Britain’s David Frost. And how he was entitled to say such words.

In the long history of heavyweight boxing, there have been few fights that are fit to be placed alongside the bout that resulted in Ali’s KO of Foreman. Fans and experts alike were genuinely afraid for the 32-year-old legend’s health, maybe even his life, going into the fight that was originally to have taken place six weeks before it’s eventual October 30th date (due, of course, to Foreman suffering a cut in sparring whilst already in Zaire).

These fears reached almost heart attack level when the action began; as Ali, sensing he could not dance for a full 15-rounds with the adept at cutting off the ring champion, decided to play his new game, “Rope-a-Dope.” Appearing to be giving Foreman his best chance of victory by allowing the unbeaten 25-year-old to pound on him at will, Ali made it almost impossible for those people who cared about him to even watch!

Ali’s tactics had not started out this way, though. History tells us how another legend, the wise old trainer Cus D’Amato, told Ali before the fight, before he even left America, to go right out at Foreman and crack him with a hard shot to the head. in the very first round. “Let him know right way he’s in a fight,” Cus told Ali. And, causing the first of so many shocks that took place during the whole incredible fight, Ali belted Foreman with right hand lead after right hand lead – each one sending spray off the young champion’s head in that sensational opening three minutes.

As amazing as this was, though, Ali’s decision to go to the ropes, pretty much throughout the remainder of the fight after the 1st-round, sent heart rates even higher. Taking an awful risk even his trainer Angelo Dundee was imploring him not to, Ali spread his feet, let the loose ropes take his weight, and fired back with sharp punches as big George wailed away at him.

Somehow, this worked for Ali. They say genius can’t be taught, and once again that night in Africa, Ali proved he was a boxing genius. The battle raged on in over 80-degree heat for what seemed like a lot longer than eight-rounds, and then, as every fight fan knows, Ali spun George around, came OFF the ropes and hit the soon to be-ex-champion with a combination that ended with a smashing right to the jaw. Foreman fell, as great writer Jerry Izenberg later put it, “in sections.”

The count looked like it might have been slightly short, possibly due to the way U.S commentator Bob Sheridan (who did an otherwise great job behind the microphone) picked up the count of referee Zach Clayton a second or so late, and soon after the fight this gave Foreman cause for complaint. Indeed, the stunned former champion had a ton of excuses for why he lost – the loose ropes and the “quick count” being just two of them. Years later, however, George, now a born-again Christian, admitted he’d simply been beaten by the better man – one of the finest human beings he’d ever known.

For Ali, the KO that came at 2-minutes and 58-seconds of the 8th-round, completed the circle. Ten years after first winning the title from the also feared Sonny Liston, The Greatest was back on top. Should he have retired right then and there, as he said he would do beforehand? Maybe, but Ali was born to fight, and as long as he could still do so at top level (and even after he could not) he was going to continue to box.

He was, after all, The Greatest. Never was this so masterfully proven than when he did the unthinkable in the African jungle 35 years ago this very day!