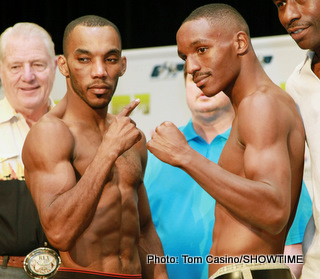 No. 2-rated World Boxing Council (WBC) 140-pounder Devon Alexander “The Great’’ weighed in at 138 ½ pounds and No. 3 ranked Junior Witter measured 139 pounds. In the first half of the doubleheader, the undefeated Alexander (18-0, 11 KOs) of St. Louis will face former champion Witter (37-2-2, 22 KOs), of England, for the WBC strap that Bradley voluntarily relinquished to fight Campbell. Bradley originally won the WBC title by defeating Witter on May 10, 2008 on SHOWTIME.

RANCHO MIRAGE, Calif. (July 29, 2009) — There were moments of calm and reflection on what was supposed to be a very festive press conference Wednesday as the principals for Saturday night’s huge World Boxing Organization (WBO) 140-pound title fight passed on thoughts and prayers to the families of Vernon Forrest and Arturo Gatti, who both died tragically within 15 days of each other earlier this month.

Timothy “Desert Storm’’ Bradley, Nate “The Galaxxy Warrior” Campbell and Forrest’s former promoter Gary Shaw each paid tribute to the two fallen fighters. Campbell wore a Vernon hat and Gatti shirt and spoke at length about his friendships with both. Shaw became emotional at one point and called for a moment of silence for Forrest at the beginning of the press conference held at The Show at Agua Caliente Casino • Resort • Spa.

In the first half of a world championship doubleheader, undefeated, No. 2-rated Devon Alexander “The Great’’ (18-0, 11 KOs) of St. Louis will face No. 3 Junior Witter (37-2-2, 22 KOs) of England for the World Boxing Council (WBC) strap that Bradley voluntarily relinquished.

Tickets are available for purchase online at www.HotWaterCasino.com/TheShow or by calling (800) 585-3737.

What the fighters had to say before the media on Wednesday:

“I want to dedicate this fight to Vernon Forrest. He was a very sincere guy, a very nice guy, just a really good guy. When I heard he was murdered I was blown away. He’s a good dude, a great fighter and a great champion.

“Campbell and his crew can talk all they want but words don’t mean nothing. Come Saturday night, the boxing will do the talking. He’s a pit bull; I’m a pit bull and we’ll do it Saturday night. See I’m ready and he says he has seen it all. He thinks he’s seen this but he hasn’t seen the youth, the speed that I bring. He hasn’t seen nothing like me.

“I’m ready, I trained hard. Nate hasn’t seen the speed that I possess.”

“Come Saturday, you’ll see who is champ and that’s me, Timothy Bradley.”

“I want to see what I can do when my back is against the wall under pressure. Nate is going to take me to another dimension. I’m going to have to fight in there.”

“I’ve heard all the bad Campbell soup jokes Tim’s been telling and they don’t phase me. I’ve fought the baddest fighters and won and then kept fighting the next one they threw in front of me and won. I am not afraid and I don’t run.

“I love that the other guy across the ring doubts me. I love that his team doubts me and the fans doubt me. I will prove them all wrong.

“The night will come to an end when Timmy can’t take anymore. See when you look at me you look at the real American dream. I know what it is to suffer and struggle. Question is, does he?”

“Anger is what drives me everyday. I was a foster child and didn’t have the stability most children have… I attended over 15 schools. I had to pull myself up by my boot straps. … That’s how I know I will persevere this challenge and be the champion.”

“Very young I decided that I was going to give boxing my all. It’s me and it’s who I am.”

“I don’t want the fight to end early. I’ll give him hell as long as he can take it.”

“Timothy is a nice guy – but that has nothing to do with the price of tea in China when the bell rings.”

“Talk is cheap but you have to walk it when the bell rings.”

“I have paid my dues more than Bradley or any other boxer in this room. I can box or punch. I can punch with either hand. I carry the fact that the other team and the press doubt me and I like it. I have nothing to prove to you … You already doubt me.”

(From Kevin Cunningham, Alexander’s trainer): “We’re here. We hear a lot of comments about Devon being too young or not ready but you’ll see Saturday why he is called “The Great”. (To Junior) It was a long flight here from the UK and let me tell you, it will be an even longer flight back after Devon’s beats you Saturday night.