Abraham-Oral This Saturday on SHOWTIME 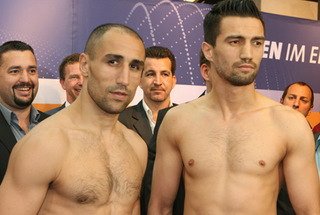 With just two days to go until the world championship fight, Abraham and Mahir caught up with SHOWTIME to discuss the fight, their opponents and their plans for the future.

The site of the scheduled 12-round world championship fight is Abraham’s hometown of Berlin, Germany, and will take place at the Max-Schmeling Halle.

A former sparring partner of the defending champion, Oral is a German boxer of Turkish descent who has won his last 18 fights. The 6-foot-1, 29-year-old fights out of Hamburg, Germany, and, like Abraham, has fought the majority of his fights in Germany.

What the fighters had to say on Tuesday:

“I know Oral very well after sparring together a few years ago.”

“He is very fast and he is very dangerous with his left and right jab. He is also very fast on his legs and feet.

“We’ve analyzed a lot of his tape and we have some special techniques to concentrate on.”

“It’s no problem for me to make the middleweight limit. I started working on my weight very early, about four weeks ago. It’s no problem. I weigh about 164 pounds right now. When I’m not in training, I usually weigh around 176.”

“Of course, I’d fight Kelly in the U.S. I’d even fight him in his living room. I’d fight him any place he wants.”

“After Oral, Giovanni Lorenzo would be my mandatory challenger, so I’ll fight him. But if there is a chance for a unification bout with Kelly Pavlik, of course we would take it.”

“Super Middleweight is very, very interesting to me because there are a lot of good fighters that you can make very big fights with. But, my aim is to go up to the super middleweight division as the super champion at middleweight.”

“I’ve never been knocked down in my professional or amateur career. The only injury I’ve had was the broken jaw against Edison Miranda.”

“The management of Kelly Pavlik keeps saying they need another fight and another fight before they are ready for us. Now, they want to make the fight in the next year. That is a long time for Aurthur. It’s too long for him because he doesn’t want to stay in middleweight forever. He wants to move to 168, but it’s a question of when.”

“There were some problems with Giovanni Lorenzo. We couldn’t make the contract for that fight. Oral was the best candidate on the market. He comes from Germany, so it made for a good promotion.”

“I didn’t spend much time on the video because I know Arthur very well from sparring with him. Almost everybody in Germany knows how Arthur fights. I had very good sparring for this fight. The sparring was excellent.

“Arthur hasn’t changed that much since we’ve sparred. He’s still the same fighter. Of course, he has developed and he has grown. But, it’s still the same kind of fighting. I know that Arthur will wait for his chance and will cover up very well. That’s how our sparring was.

“It’s much harder for Abraham than it is for me to make the 160-pound limit. I’m almost on weight right now.”

“Since we’re fighting in Berlin, it will be more of a hometown fight for Arthur. But, there are a few buses of fans coming from Hamburg for the fight. Although Arthur might be the fan favorite in Berlin, there will be a lot of fans cheering for me as well.”

“I am very happy that this is being broadcast in the U.S. on SHOWTIME. I want to show a great fight. I hope that people in the U.S. will know my name after this fight. And I hope to be the champion by then.”

Previous post: Inside the Adamek Training Camp – Gunn vs Adamek