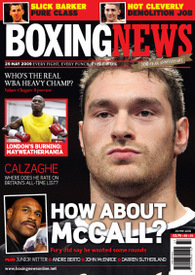 29.05.09 – Despite only being a pro since last December heavyweight sensation Tyson Fury graces the cover of this week’s Boxing News. The vastly respected magazine is the only weekly boxing magazine in the World and is this year celebrating it’s centenary having been first published back in 1909. The magazine normally reserves their front cover for established World stars so Fury’s appearance is a testament to the impact he has had on the sport during his short career to date.

The cover story relates to Fury’s second round destruction of Scott Belshaw at the Watford Colosseum last Saturday night with editor Claude Abrams suggesting that former world Heavyweight Champ Oliver McCall may be an interesting matchup for the 6 foot 9 inch 20-year-old. McCall who famously won the title with a stunning second round KO of Lennox Lewis enjoyed another second round win in Las Vegas at the weekend to press his claims for another shot at the heavyweight title.

Fury who has now won all 6 of his pro fights by stoppage will return to the ring at the Robin Park Arena in Wigan on Saturday, June 13th when he features as the chief support to the British Lightweight title fight between John Murray and Scott Lawton..

Froch, Britain’s only reigning World Champion is coming off the back of 2008 and 2009 World Fight of the year candidates. Last December he beat the then undefeated Jean Pascal in a thrilling 12 round battle to lift the WBC title. He followed that up with a sensational KO victory in the twelfth and final round against former Undisputed Middleweight Champ Jermain Taylor in the U.S. last month. Froch’s dramatic win over a marquee American name like Taylor has had fight fans around the world eagerly awaiting his next move.

Unbeaten in 25 professional fights with 20 wins coming by KO Froch returns to the ring in September where he’s hopeful of securing a unification clash to cement his position as the best Super Middleweight in the world.