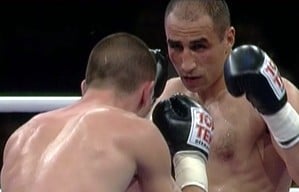 Undefeated IBF middleweight champion King Arthur Abraham and manager Wilfried Sauerland today admitted their surprise at Jack Loew´s most recent remarks in the press. Kelly Pavlik´s trainer had told reporters that his camp has yet to receive a response from Team Sauerland regarding a potential unification clash – a clash that could take place either in the United States or in Germany. Staging the showdown between the two champions is exactly what Wilfried Sauerland intends to do. In fact, he has been trying to set something up for months. “We were very surprised to read Jack Loew´s comments,” Sauerland said. “He must be living on a different planet. Last spring we have picked up negotiations with Pavlik´s promoters Top Rank. We have also been in constant touch with HBO and Showtime. However, in the last couple of months, Top Rank seemed to have lost their interest in a unification..

“Bob Arum once said that from a sporting perspective Arthur would be Pavlik´s most important opponent but that his fighter also has to think about earning money. Obviously Arum shares the view of many experts who all believe that Pavlik would lose against Arthur.”

Sauerland would be more than happy to finally set up the one fight the boxing world has been waiting for. “We are ready to fight Pavlik at any time and absolutely everywhere. Arthur would even come to his home town. If Pavlik and his people are really interested in coming to Germany, they should let us know officially. We would be more than happy to make an attractive offer.”

It is today that King Arthur turns 29. To celebrate in style, coach Ulli Wegner has granted him – as well as his training partners – a whole day off from practice. The IBF champion will stage a party at Berlin´s famous Ritz-Carlton Hotel at the Potsdamer Platz. “The only reason why I am still fighting at middleweight is Kelly Pavlik,” King Arthur said. “I want his belts and I want to be super champion. My only birthday wish is a unification fight against him.”

Sauerland claimed there was no reason for Pavlik to be afraid of losing his titles. “Arthur will move up to super-middleweight after he has defeated Pavlik,” the manager added. “Pavlik could fight for the vacant titles straight away and win them back.”