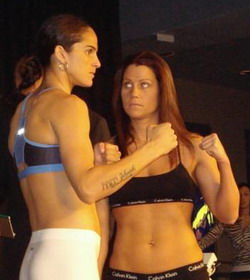 February 21st 2009 – By Irish Paddy Cronan, OnTheGrindBoxing.com: “The first time I met Bob Arum three years ago, I went up to him and I said that I would really like the opportunity to fight on one of his under cards. He told me that he was not into female boxing.”

After hearing that Maureen could have given up and resigned herself to the fact that she would never appear on a Top Rank undercard. Instead, she decided she was going to change his mind.

Last month Maureen had another meeting with Bob, and again he told her he was not interested in female boxing. She decided to chance her luck, “They may not be into women’s boxing, but they will be into Maureen Shea. Just give me the opportunity, watch my DVD put me on your show and people will enjoy my performance.”

Here she is now, fighting for a WBA title on Top Rank three years after being told she would never fight on a Top Rank show..

When asked about how her team have played a part in her continued success she responds, “Its about loyalty. Seven years I’ve been with Hector Roca (trainer). Lugi Olcese (manager) was my amateur coach, he brought me to Hector. I’d been with Vinny Sullivan (conditioning), and then Robert Ferguson came in. I never said ‘okay Vinny you got to go, Roberts here now.’ Everybody unites together, and everyone works well together because everyone contributes something different thank makes me a better fighter.”

I asked Maureen about how she feels about being half Irish and having the opportunity to fight on cards with John Duddy in the past.

“I’m Irish and I’m very proud of it. I would love to fight in Ireland. I feel almost like I’ve fought in Ireland because I’ve fought in The Garden twice on the eve of St Paddy’s day. I mean thats the closest thing to it, I hope to get out to Ireland. The Irish fans are phenomenal, I can feel their energy. It was indescribable. I feel that I’m their daughter. I felt like I had a million brothers and fathers watching me, and the women too…mothers. Its incredible because you feel that family feeling, that camaraderie from the Irish. When I found out John was on the card as well I said ‘that’s wonderful.’ I was happy for him, and I was happy that the fans would come because I know that we share a lot of fans after they saw me fight on his under card twice. Its great, their energy and their presence, I can feel them in the ring. They come out and their passionate, I love the screaming and I love the chanting. It fuels a fighter. The first time I saw that was when John fought Yori Boy Campas. I saw John taking some shots and I was thinking oh man, all of a sudden the fans came out chanting. I saw a fire in Johns eyes when he heard that he felt them. It was amazing what I saw happen in that fight. He came back with a flurry like Yori Boy never even touched him. It was incredible. I said, ‘wow that’s passion , that’s support right there and that helps a fighter and the fans need to understand that.”

On the 21st of February Maureen starts a new chapter in her career, by challenging for the WBA Women’s Featherweight Title against Kina Malpartida in Madison Square Garden on the under card of Cotto-Jennings. I remember the first time I saw Maureen, it was on a John Duddy documentary. I didn’t even notice that she was a boxer, she spoke like a publicist… every word perfectly executed. It was only when I watched it again that I noticed “Maureen Shea, boxer” at the bottom of the screen. The old cliche “don’t judge a book by its cover,” certainly springs to mind. During my time talking to Maureen I got the impression that she can accomplish anything she puts her mind to. She has a great attitude and is very humble. Maureen Shea is not just a female boxer, she’s a fighter pure and simple. That’s not something that can be taught, it comes from within.

February 20th 2009 – by Irish Paddy Cronan / OnTheGrindBoxing.com – When one thinks of Irish-American boxers the names Dempsey, Ward and Sullivan immediately spring to mind.

Maureen Shea is the latest in a long line of Irish-American title challengers. She was first thrust into the spotlight while acting as a sparring partner for Hillary Swank in the movie Million Dollar Baby. When Hillary would attend her amateur fights, the media followed.

I was curious to find out how this early publicity shaped her career.

“I feel I rise to the occasion. If it was about her, it was about her. I was there to do one thing and that was to work with her. Then the media was coming down to see me and to talk to me. I went with it and I did interviews when ever it was ok and we always got my training in. To me it didn’t make a big deal. I felt it was good for the sport for men and women’s boxing,” recalled Maureen.

“People have been calling me out my whole career, I will fight who ever gets put in front of me. I feel that if I wasn’t able to box a lick the media wouldn’t have cared about me. The media came because of Hillary but they saw that I was a good fighter and the story became me.”

When asked about her ambition to win the WBA title, Maureen enthusiastically answers, “This is a great opportunity for me, and I’ve worked hard for it and that’s important for people to understand that. I didn’t get this by just sitting on my behind. The WBA title is mine to have, so I’m going to go get it.

As a female in a male dominated sport, Maureen has experienced adversity from day one.”I’ve had fighters come up to me and say you don’t look like a fighter you look like you should be in the kitchen baking pies. Why do you want to be a fighter? Fighters come out of jail they come from the streets.”

I was curious to find out how her loss in the New York Golden Gloves effected her. “That could have been the end of my career but I would not let that get me down. As long as I leave my heart and soul in that ring and I do my best and I train to the best of my ability. Whatever the decision of the judges is all I can do is my best. I walked away from that fight knowing I did my best. Some people felt the decision should have went the other way and I won the fight. I am where I am now because a persevered and I didn’t give up. “

When I inquired as to how her family and friends reacted to her dream of being a boxer and winning a world title, she responded “I didn’t listen to those people that were telling me women shouldn’t box. Oh Maureen your smart, your pretty ,you could model you can go become a lawyer. Why are you doing this nonsense ? I love this sport and there’s nobody that’s going to deter me from reaching my dreams.”

It was clear from talking to Maureen that she relished the role of the underdog, and enjoyed proving her critics wrong, one of these critics was legendary boxing promoter Bob Arum.

Alongwith “Iceman” John Scully, “BigTime” Tim Kudgis and Suge Green, “Irish” Paddy Cronan is part of the On The Grind Radio team. OTG Radio is live at 8pm est/5pm pst Sundays and Thursdays (1am UK, Mondays and Fridays) right here on eastsideboxing, listen to past episodes by clicking the “On The Grind Boxing Radio” button.