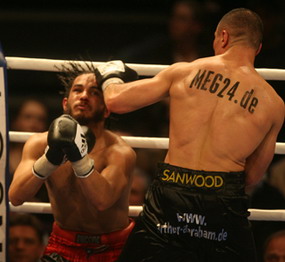 IBF middleweight champion King Arthur Abraham is ready to conquer America after his 12th-round KO victory over Elvin Ayala. The undefeated 28-year-old dropped his opponent with a huge left uppercut with 28 seconds to go in the final round to clinch his 26th victory in as many fights (21 KOs). “Arthur will fight in the U.S. on June 21,” manager Wilfried Sauerland said afterwards. “I would have loved to reveal the opponent tonight but the contracts have yet to be signed. All I can say is that it will be a true highlight.”

In his seventh title defence, King Arthur was the aggressor throughout as he used his punching power to put Ayala under tremendous pressure. The challenger, however, refused to give in and proved a great chin. “He was an awkward opponent,” Arthur said. “I was in full control throughout and tried to wait for my chance.” It eventually came just before the final bell when King Arthur landed a vicious left uppercut. “It came so quickly I didn´t even see it,” coach Ulli Wegner lauded. “That just shows his class and potential. I am pleased with his performance..”

Highlights of the spectacular fight will be shown next Friday on ESPN´s Friday Night Fights.

After a slow start, Abraham picked up speed as the fight progressed and constantly pelted Ayala (18-3, 8 KOs) with power shots to head and body. In the fifth, he knocked him down with a right but the American jumped straight back up. The sell-out crowd of 6.000 fans raised the roof whenever Abraham launched one of his furious assaults. However, it was not until the last round that the brave challenger gave in. “Arthur is a very strong opponent,” the American stated. “I think I did well but he just caught me at the end. It happens in boxing. I will come back.”

Abraham can´t wait to make his U.S. debut in June. “I will fight whoever my manager picks,” he said. “It will be a great honour to fight in front of an American audience.” Sauerland revealed that after the June 21 date Abraham is expected to make his mandatory defence in Germany in September. “In December or January Arthur will then take on Kelly Pavlik in the States,” the manager added.

On the undercard, up-and-coming cruiserweight Yoan Pablo Hernandez (14-1, 8 KOs) surprisingly lost his WBA Fedelatin/WBC Latino cruiserweight titles to former world champion Wayne Braithwaite (23-3, 19 KOs). Hernandez floored his opponent in the first round before a spectacular second round saw both fighters trading punches. Braithwaite prevailed in the third, knocking the Cuban down three times to take home the belts. “I am disappointed but I will learn from this defeat,” Hernandez said. “I did not listen to my coach.”

Meanwhile, First Lady Cecilia Braekhus (6-0, 2 KOs) cruised to a unanimous points victory over Germany´s Tatjana Dieckmann (1-3). The Scandinavian beauty had her opponent down in the second round but Dieckmann somehow lasted the full six rounds. “Cecilia has the potential to be world champion soon,” coach Ulli Wegner lauded. “She learns very fast and it is a pleasure to work with her. She´s got everything you need to be a star.”