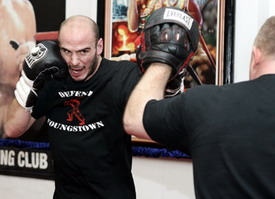 31.01.08 – Photo by Chris Farina – Top Rank – KELLY PAVLIK : “I know Taylor wants redemption, he’s a competitor, but that may be his downfall. I can tell he is more intent on beating me than on winning the fight and believe me, there is a difference in those philosophies. This fight is my sole focus. I’ve been watching more tape than I usually do. Jack and I have been working on correcting the mistakes I made in the last fight — I won’t be sticking my chin out in this fight. The rematch is going to be tough, but I think he has a lot more to correct than I do. I’m having my best training camp ever. Winning the title has added extra motivation to me. It has spurred me to raise my performance to another level…a level I have never experienced before..”

“I have been training Kelly since he was nine. He’s always been a hard worker in the gym, but since he’s won the world title he’s become a different fighter in the gym. He is more focused and you can tell he’s working harder on his strength and conditioning because his punches are faster and more explosive than ever. He’s been on weight for over a week and he’s training like an animal. Kelly Pavlik, world champion, is a whole different cat from Kelly Pavlik, the contender. That’s how much he has improved since winning the title in September. It’s remarkable. Nothing has distracted him. This is a big fight for Kelly from a money point of view. The money will be much bigger for Kelly when he beats Taylor again. Taylor didn’t change in any of his fights and I doubt he’ll change now. Kelly’s not going to be much different either. He’s still going to come to fight and throw a million punches. But we’ll have a few tricks up our sleeve. “He’s [Ozell Nelson] the guy who taught him [Jermain Taylor] all his bad habits, so I’m thankful Jermain brought him back. Taylor has a lot more to correct than we do. We’ll correct our mistakes; it’s a matter of will he?”

It was standing room only at the Southside Boxing Club in Youngstown yesterday as undefeated middleweight champion KELLY “The Ghost” PAVLIK (32-0, 29 KOs), and trainer JACK LOEW hosted a media workout. Reporters and TV crews from all over Ohio descended on the only gym Pavlik has ever known to speak to its favorite son as he prepares for his epic rematch against former undisputed world champion Jermain “Bad Intentions” Taylor (27-1-1, 17 KOs), from Little Rock, AK. Promoted by Top Rank and DiBella Entertainment, Pavlik-Taylor II takes place Saturday, February 16, at the MGM Grand. It will be produced and distributed live by HBO Pay-Per-View, beginning at 9 p.m. ET / 6 p.m. PT.

Remaining tickets, priced at $600, $400, $300, $200, and $100, are on sale at the MGM Grand Garden Arena box office. Tickets are also being sold at all Las Vegas Ticketmaster locations (select Smith’s Food and Drug Centers, Macy’s West at the Fashion Show Mall and Ritmo Latino.) Tickets sales are limited to eight (8) per person. To charge by phone, with a major credit card, call Ticketmaster at (702) 474-4000 or MGM Grand at (800) 929-1111. Tickets are also available for purchase at www.mgmgrand.com or www.ticketmaster.com