STAMFORD, Conn. (July 25, 2007) – Tye “Big Sky” Fields (37-1, 33 KOs) one of the rising stars in the heavyweight division will face one of his biggest challenges to date in Cedric Boswell (24-1, 19 KOs) in a 10-round clash that will headline the next Fight Night on VERSUS in collaboration with Top Rank Boxing, Thursday, August 9 at 9 p.m. ET from the Hard Rock Hotel Casino in Las Vegas.. 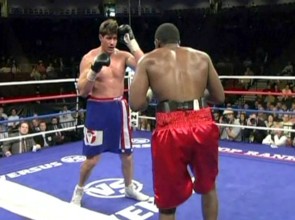 The 6’8” Fields has a 21-bout winning streak on the line. In his last fight, which was televised on VERSUS on January 25, Fields earned a 10-round unanimous decision over Kendrick Releford. The Las Vegas resident is hoping his win streak and climb through the heavyweight ranks continues as the southpaw prepares for his battle with Meehan.

Boswell, 6’3”, has put away both opponents this year in the first round, kayoing Steve Pannell in his last fight on May 18 in Colorado. He also scored a first round TKO over Robert Kooser in January in Detroit. His only loss came to Jameel McCline in 2003.

The undercard will be headlined by the 10-round welterweight bout between Joshua Clottey (31-2, 20 KOS) and Felix Flores (25-5, 18 KOs). In his last fight, the 29-year-old Clottey, originally from Ghana and now fighting out of the Bronx, New York, won a 10-round unanimous decision over Diego Corrales on April 7 in Springfield, Missouri. Against Corrales, Clottey scored a pair of late knockdowns to earn the unanimous decision. In his prior fight, Clottey received his first title shot against WBO champion Antonio Magarito and lost by decision, suffering a broken hand in the fourth round of the fight. Clottey is rated WBO #3, IBF #8, WBA #8 and WBC #9.

Veteran fight announcer Nick Charles and Wally Matthews, a veteran boxing writer who has covered the sport for two decades will host. Michael Buffer, the tuxedoed announcer who coined the catchphrase “Let’s get ready to rumble!” will again serve as the ring announcer for the live fights.

VERSUS (VERSUS.com) celebrates real competition in all its forms. Now in more than 72 million homes, the network is the national cable home of the National Hockey League (NHL) and the Stanley Cup Playoffs as well as best-in-class events like The Tour de France, the America’s Cup, the Professional Bull Riders (PBR), World Extreme Cagefighting (WEC), Professional Boxing, the Boston Marathon and Davis Cup. The network also offers collegiate sports from top conferences such as the Pac-10, Big 12 and Mountain West. VERSUS features the best field sports programming on television and is a destination for sports fans, athletes and sportsmen to find exclusive, competitive events that audiences can’t find elsewhere. VERSUS, a wholly owned company of Comcast Corporation (NASDAQ: CMCSA, CMCSK), is distributed via cable systems and satellite operators throughout the United States.

Next post: Baldomir vs Forrest This Saturday; HBO Boxing After Dark to Air with Hopkins-Wright Replay