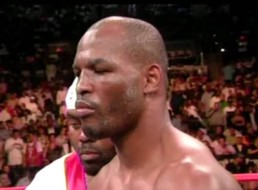 29.11.06 – By Adrian Saba – Ten years ago, Bernard Hopkins was beginning his reign as Middleweight Champion and a quest to achieve greatness. Three years earlier, he was involved in his most important fight until that moment, a twelve-rounder against Roy Jones Jr., for the vacant IBF Middleweight Title (that was held by James Toney before that). Though both were not in their primes yet, Jones easily outpointed Hopkins and won the decision: 116-112 in all the scorecards. After that debacle, Bernard resurged and became the dominant figure of the Middleweights for several years, while Jones and Toney were hunting greatness in other places. During those years, ‘The Executioner’ was still dreaming of being named near to Monzon, Hagler, Greb, Robinson and other icons.

Bernard finally gained the recognition as ‘Undisputed’ 160-pounds’ Champion after defeating Keith Holmes and Felix ‘Tito’ Trinidad. Is Trinidad-Hopkins the most memorable outboxing lesson in history?

Probably. After Tito, Bernard continued defending his Title, and in 2004 he KOed Oscar de la Hoya in an ugly fight, which was a historical duel just because of the fighters it involved. In 2005, Hopkins couldn’t beat his heir apparent (something that Monzon did twice), losing the belt in a close contest against Jermain Taylor.

Months ago, Hopkins, one of the most charismatic personalities in boxing, told that he was planning to fight Oleg Maskaev (WBC titlist and #2 contender in The Ring) next year. Probably he will proceed with his machinations and challenge the Russian. Last week, he revealed that he is an active fighter again (although, there was never much information about his retirement, he never vacated the Ring’s Light Heavyweight belt) and that he exclusively wants the Heavyweight Championship of the World. Splendid news, this only makes 2007 look more attractive. One of America’s finest and most charismatic warriors is coming back, to reclaim what before was considered a birth right.

Recently, he has said the following: “They weighed me (…), 190, I feel good dawg”. If he’s wants to be serious in this new task, he can learn a lot from the mistakes of others. For example, James Toney. Hopkins must remember the importance of being constant with his weight and training. He should also keep in mind that a fight can end with one brutal punch, a lesson that was not digested very well by Sergei Liakhovich.

Something that left a sour taste in my mouth was that Hopkins never clarified if he’ll go to Heavyweight for just one fight, or if he’ll try to become a contender. He wants to win one ‘belt’ or he wants to unify? That would depend on how he performs in his first fight at Heavyweight. If he does very well, we will celebrate that, and tell him to continue. He should at least try. That’s all a human can do, try. Hopkins’ accomplishments won’t be dimished if he is defeated by a Heavyweight, he has nothing to lose. And he has a lot to win.