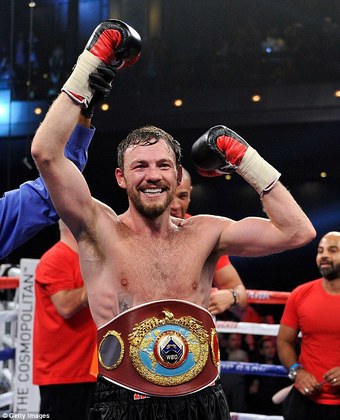 The events of the past week have been a microcosm of the world of boxing, the good, the bad and the downright unfair unfolding before us. All of the events, euphoric, frustrating and heartbreaking in equal measure, the greatest and yet cruelest of sports ever perceived in full view once more.

When Andy Lee entered the ring against unbeaten former World Amateur champion, Matt Korobov, he did so as a huge underdog. Korobov was the house fighter and champion elect, primed for big things by his promoter Top Rank at least. Whereas Lee was a fringe world level fighter beaten twice, by Brian Vera in ’08 (a defeat he avenged in ‘11) and Julio Cesar Chavez Jnr in a ridiculous weight mismatch in ‘12.

At the end of the 5th round, the bookies seemed to have it right with Lee down on the scorecards 45-50 twice and 47-48. What happened in the 6th is unique to boxing a punch representing a life spent in the gym, hours of practice and patience channeled into one life changing moment, where all the effort, commitment and sacrifice pays off.

It was over the moment in landed, when Lee stepped in to finish Kenny Bayliss’s intervention was inevitable.

In his post fight interview Lee spoke of the cyclic significance of the event, having signed his first professional contract with Emanuel Steward on 15th December 2006, 9 years to the day. What followed was an emotional tribute to his great former trainer and father figure, alongside his current Trainer Adam Booth, who he feels he owes so much.

On a night of huge fights, it was the Cinderella story that caught my eye, there is just nothing like seeing the culmination of a lifes work come to fruition.

There is more to boxing than waging war and showing aggression, well, that’s the opinion of this writer at least. Unfortunately, this was not a notion shared by the fans and on one occasion the judges of Las Vegas this week past. Of course I refer to the jeers, which greeted Keith Thurman’s landslide win over Leonard Bundu at the MGM Grand and the preposterous scorecards in Timothy Bradley’s split draw with Diego Chavez.

Fans will always, always, always crave the kill, this goes back centuries, and it’s not something new and not something that is ever likely to change. All sports fan’s love action and yearn for excitement, that’s what they pay their money for, this much is obvious. What I find to be disappointing and misguided when it comes to boxing is the view of what is consider entertainment to the fans or scoring to the judges.

Keith Thurman was roundly booed for outclassing an unbeaten, well-schooled and tricky Olympian in Bundu, because he didn’t knock him out. With 21 or his 23 victims being halted early, the Floridian is a noted banger, but what makes him an outstanding talent is he is so much more than that. This man unlike previous punchers in and around his weight class, Matthysse and Ortiz for example, is a thinker a boxer/puncher in the highest sense of the term that can go all the way to the very, very top.

Over at the Cosmopolitan, Bradley adopted a different approach, choosing to engage the brawler, proving to the fans and Diego Chavez alike that he is not just a world-class boxer. He did so successfully, winning all of the brutal, head clash ridden early rounds, earning the right to box out the remaining three rounds with his left eye swollen shut. What followed was a horrible decision; by judges who seemed to conform to the stereotype that this was a Chavez type of fight, ignoring the actual action.

There will always be indignant fans and incompetent judges, that much is clear, it’s the fact that we are now witnessing them with increasing regularity that makes it disconcerting.

The moral of the story, if you have the skills, use them to pay the bills.

When it was announced that Anthony Crolla was to fight Richar Abril for the WBA lightweight title at the Phones4U arena in Manchester on 23rd January 2015, the British boxing scene rejoiced. From the outside looking in Crolla appears to be the most likable guy in boxing, something that has been confirmed in spades this last week. Likability aside, the Manchester lightweight has shown real signs of improvement moving into a winnable contest that would see his lifes dreams fulfilled and efforts rewarded.

Cruelly, his opportunity was ripped away, when Crolla was left with a fractured skull and broken ankle when attempting to apprehend two alleged burglars at a neighbour’s home in moment of courage and heroism that would prove alien to a large portion of society.

Joe Gallagher (Crolla’s trainer) summed it up; “He is in bits and heartbroken. I’m devastated for him. He has been training for six weeks for this and had a shot at the world title in his home town.”

There was a semblance of social media hindsight, which suggested that Crolla should have looked the other way and this could have been avoided. I don’t buy that; courage and accountability are essential in our society and the more Anthony Crolla’s in the world the better. It’s just, boxing much like life has no respect for dreams or timing, but as far as this being the end for Crolla, I have my doubts.

When stopped in 6 by Derry Mathews in April 2012, he refused to accept that he is a domestic level fighter. On Tuesday night, he refused to believe that it was acceptable to look the other way. Now, I expect him to refuse to accept that his dreams are over and with a heart as big as Crolla’s you’d be a fool to back against him.