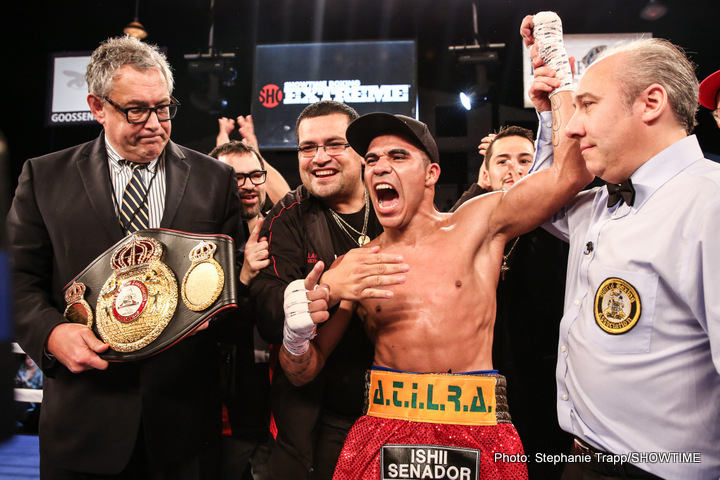 “Cuellar showed why he is an exciting featherweight,’’ SHOWTIME boxing historian and expert analyst, Steve Farhood, said afterward. “He tries to knock you out with every punch. He’s crude but relentless, and was way too strong for Tamayo.

“I can’t wait to see how Cuellar matches up against some of the other featherweights in the top 10.’’

Cuellar, 28, a devastating body puncher ranked No. 1 in the WBA, dropped Tamayo twice in the fourth and once in the fifth. The first knockdown came from a right to the chin; the others were from body shots. After the last knockdown, referee Mark Nelson stopped the match at 1:48 of the fifth.

“I’m happy with my performance tonight,’’ said Cuellar, who averaged 100 punches a round. “My team and I worked very hard in training camp and it showed. I corrected mistakes from my last fight. Sometimes, I get too anxious in there and I come out too strong. I feel that this time I was a little bit more patient.

“I’m very happy I could close out the year headlining on national television on SHOWTIME and also on Argentina’s public channel. That was a dream come true.’’

“I really wanted to make a good impression on the fans tonight and I’m looking forward to fighting often again next year,’’ Cuellar said. “There are a lot of possibilities, but I think the fighter I’d like to fight is Abner Mares, who I met recently in Las Vegas. He approached me and we took a picture together and then he tweeted it out, saying he wanted to fight me. Well, I’d like to fight him, too. It would be a really exciting fight for the fans.’’

Cuellar, a six-time Argentine national amateur champion and two-time South American amateur champion, is unbeaten as a professional since suffering his lone loss in October 2011.

His trainer, Robert Garcia, says Cuellar is still a work-in-progress and will continue to improve.

“We haven’t seen the best of Cuellar, not by a longshot,’’ Garcia said. “He’s making good progress from fight to fight, but still has things to learn. Little by little, though, he is getting better. There is not a fighter as dedicated as he is. He’s very disciplined, trains hard, spars hard and does everything to the extreme.

“With more time, I really expect great things out of him.’’

Russell, in his first fight since his only defeat via 12-round majority decision to two-time Olympic Games Gold Medalist Vasyl Lomachenko last June 21 on SHOWTIME, won by the scores of 100-90 twice and 99-91.

“I’m O.K., pretty cool with the result and my performance,’’ said the talented, quick-fisted Russell who dominated from the outset. “I wanted to totally outbox Martin and I did. I wanted to get in some rounds, get some of the ring rust off and I did that too. I felt real comfortable in there. I wanted to box and show good ring generalship. It’s going to be a big 2015 for me.’’ 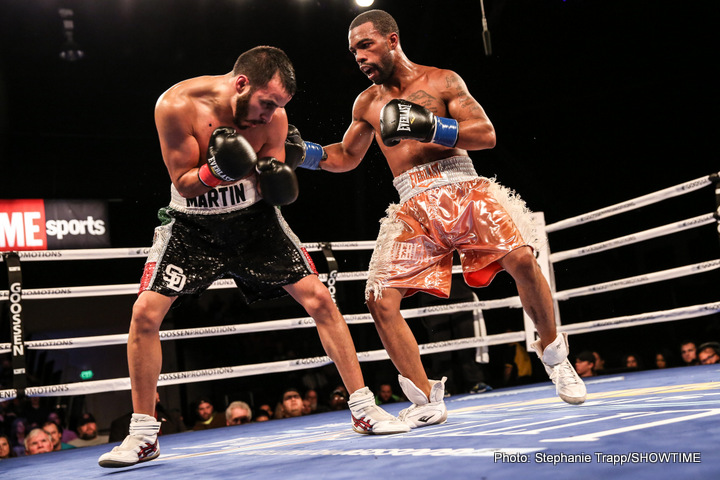 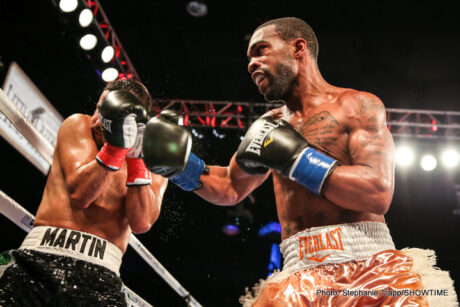 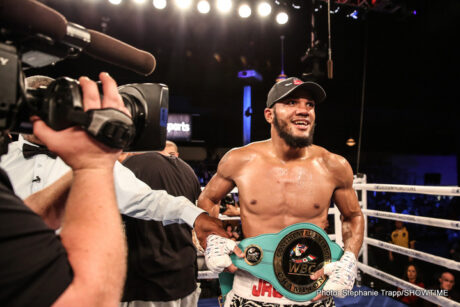 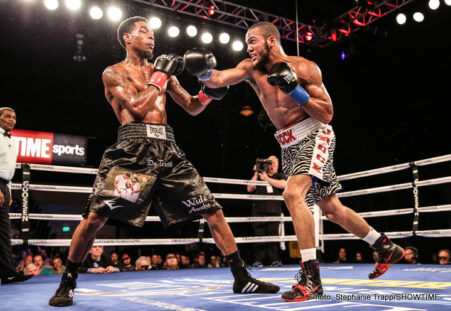 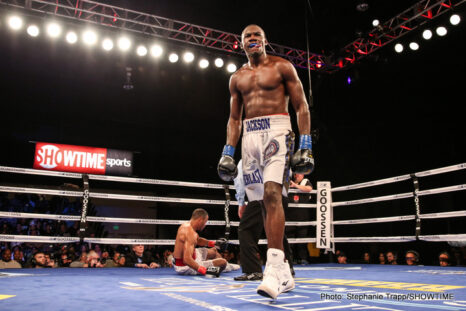 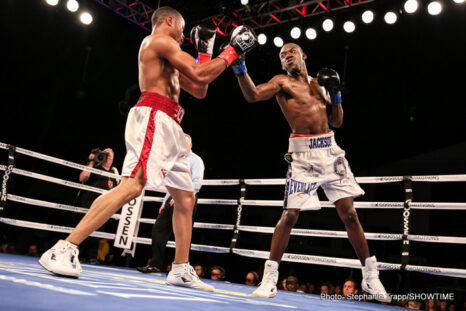 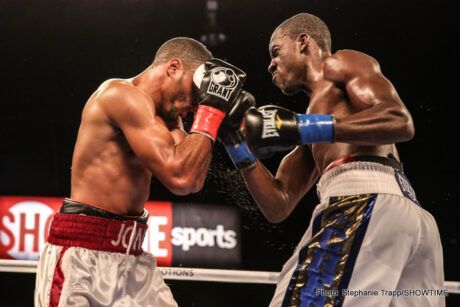 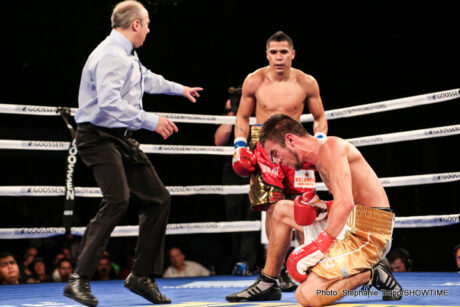 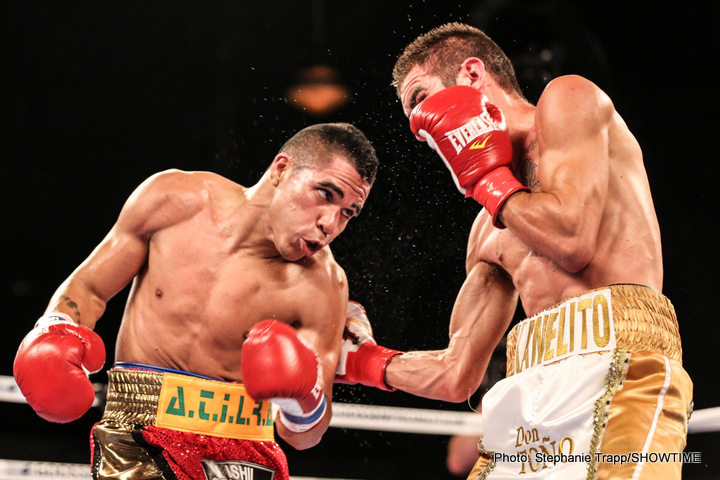 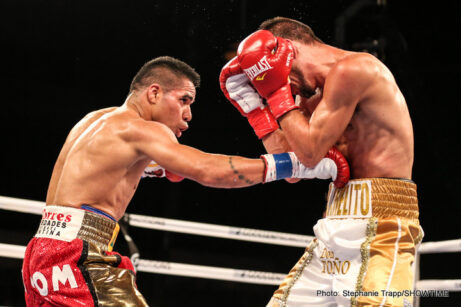 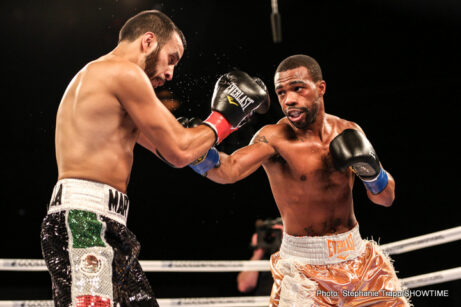 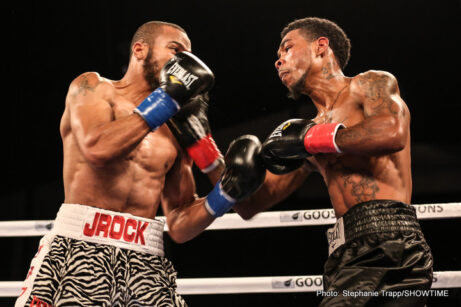 Williams, 24, thoroughly outboxed Freeman before turning on the power late. He scored two knockdowns in the seventh and one in the eighth. The first knockdown in the seventh came from a right hook to the chin. The punch seemed to stun Freeman, who took a delayed knee in the center of the ring. Late in the round, Williams decked Freeman with a right hook. When the eighth began, Williams cornered Freeman and landed a flurry. Freeman crumpled to the canvas and referee Robert Byrd stepped in and stopped the fight.

“I knew he’d be tough, but it feels good to win by knockout,’’ said Williams, the new WBC Continental Americas 154-pound champion. “It’s crazy but this was my fourth scheduled 10-round and fourth knockout.

“Tonight, I just wanted to show patience and pace myself. My last fight was very disappointing to me. I rushed everything. I know I have to keep improving. When I watch tapes of my fights, I am not looking to admire myself but to see where I can improve.

“I’d like to improve 25 percent each time out. A lot of prospects get satisfied with early success, but I’m not like that. The 154-pound division is loaded. The top five guys, even the bottom five are all really tough. I want to be ready for all of them when my turn comes up.’’

Jackson, a 2008 Olympian and the current No. 4 IBF, No. 9 WBA and No. 16 WBC contender at 168 pounds, scored knockdowns early in the first and late in the eighth. Jackson was well ahead on the scorecards when referee Jack Reiss stopped the fight 28 seconds into the eighth.

“He was a tough fighter, much tougher than I thought,’’ said Jackson, 27, a five-year-pro and the son of former WBA Super Welterweight and two-time WBC Middleweight Champion Julian “The Hawk” Jackson and the older brother of super middleweight and fellow-2008 Olympian John Jackson. “He could take a punch. I don’t think I hit him that hard at the end. I feel a combination of punches may have worn him down a little.

Offered Nelson, “I’m disappointed in losing but I think I gained a few fans along the way. I will definitely learn from this fight.’’

Highlights of unbeaten Detroit middleweight Tony Harrison’s 62-second, first-round knockout over veteran Tyrone Brunson (22-4-1, 21 KOs), of Philadelphia, were shown during the telecast. Harrison, who was also interviewed live between fights, finished Brunson (who began his career 21-0 with 21 KOs until losing on ShoBox: The New Generation) with a body shot while improving to 19-0 with 16 knockouts. In a top non-televised fight, the younger brother of former world champion Marcos Maidana, welterweight Fabian Maidana (4-0, 3 KOs), of Santa Fe, Arg., scored two knockdowns in the opening round en route to a second-round TKO (0:57) over Omar Avelar (3-12, 2 KOs), of Othello, Wash.

Saturday’s four-fight telecast will replay on Tuesday, Dec. 23, at 10 p.m. ET/PT on SHOWTIME EXTREME and will be available on SHOWTIME ANYTIME and On Demand beginning on Sunday, Dec. 21.