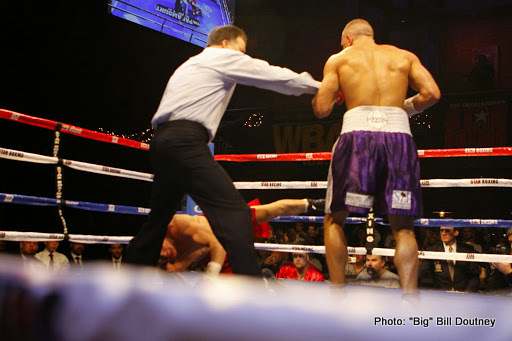 Joe Deguardia’s Star Boxing returned to Long Island’s hottest boxing venue “The Paramount Theater” for the 16th edition of its popular boxing series “Rockin Fight” with this card absent the presence of “The Pride of Huntington” Chris Algieri who is on vacation following his big fight with Manny Pacquiao. While Algieri’s absence was felt the crowd pleasing card was left in the fine hands of Star Boxing’s power punching light welterweight Cletus “The Hebrew Hammer” Seldin and Joe Deguardia’s newly signed light heavyweight Joe “The Irish Bomber” Smith Jr.

In the main event, Shirley, New York’s Seldin claimed the WBC International Silver Light Welterweight title in what can only be described a character and career building ninth round TKO rematch win over Arlington, Virginia veteran Bayan “The Mongolian Mongoose” Jargal.

The July first meeting, cut short after Seldin controlling the opening frames Jargal was seriously cut over his right eye from accidental head butt ending the fight in a no contest after tree.

The bigger, stronger Seldin answering the call of the sold out crown immediately went on the attack responding with a first round knockdown, flooring Jargal for a referee Arthur Mercante Jr. eight count with a clean straight right. To Jargal’s credit the crafty Maryland fighter proved to be very malleable finishing the round and adjusting his fight plan in the following three rounds turning the fight into the kind of two way battle that has historically built champions.

Both fighters would make adjustments, Seldin turning to a Ken Norton style swarming attack and Jargal using a deliberate jab to set up some clean combinations.

The fight fought at close range would turn with “The Mongoose” landing with quick combinations piling up points leaving Seldin to singular power shots to the body and head.

Going into the middle rounds Seldin would also make adjustments this time answering the demand of his trainer Pete Brodsky who prompted his charge to box and step over with his shots, a tactical adjustment that not only showed a new side of the “Hammering” Long Islander” but a strategic turn that would bring out the determination and a new skill set that changed the course of the fight sending Jargal to the canvas twice in the second half of the eight rounder only to be ruled slips.

Seldin, now boxing, circled behind an active and accurate jab opening up the room for sharp combinations most times highlighted by clean hooks and straight rights rocking the game and very durable Mongolian. Jargal the consummate pro wouldn’t go easy working behind his own jab and looking to counter only to fade under Seldin’s heavier arsenal.

Seldin, increasing his work rate began to pile on the punishment landing with sharp, heavy power shots dropping Jargal again in the ninth before adding a follow-up barrage of clean unanswered power punches immediately calling referee Mercante to step in and stop the action of what was the kind of entertaining, action packed main event the fans of Star Boxing and the Paramount have grown accustom.

Smith trained by the fighting Capobianco brothers, Gerry and Phil charged out at the opening sound tagging Maxwell with a thudding jab, followed a thumping right putting fear in the eyes of the Baltimore southpaw driving the defenseless “General” to the corner for a short set “Irish” bombs forcing the referee to order the fight over stopping the battering at 0:37 of round one. The 25 year old “Beast from the East” Smith climbs to 17-1 14Ko’s while Taylor drops to 18-10-1, 8Ko’s.

Karperis controlling the action from start to finish was much more patient this out setting up his shots, mixing up his punches to the body and head only at times appearing non-committal not following up numerous chances to close the show and willingly settling for a 60-54, 59-55 times two unanimous decision. Karperis improves to 9-2, 3Ko’s while James drops back into the red at 3-10-1, 1Ko.

Catskill, NY based Moldovan heavyweight Conststin Bejenaru continued his winning ways scoring a six round unanimous decision over Brooklyn’s Bolden. Bejenaru targeting the taller, longer Bolden’s body early jumped out to a quick start putting the Brooklynite on a knee placing a thudding left downstairs in round one.

The aggressive Moldovan southpaw switching his stance at times continued to bang away at Bolden’s body and bringing down his guard for repeated heavy lefts.

Bejenaru suffering a severe cut under his right eye in the sixth and final round inspired Bolden leading to the fights best two way action and Bejenaru putting on his final stamp of what turned out to be a one way 60-53 times three unanimous decision. Bejenaru improves to 8-0, 2Ko’s while Bolden finishes 6-10-1, 5Ko’s.

In a scheduled four round lightweight bout Huntington fire plug John Hernandez gave Buffalo, New York’s debuting Jack Grady all he wanted and all he could handle banging through the awkward Buffalo fighters ineffective survival mode rope a dope for a lop-sided 40-36 times three unanimous decision. Hernandez moves to 2-0, 1ko while Grady continues in search of his first pro win at 0-1.

Opening up the nights action was Huntington’s own light middleweight “Haitian Hurricane” Wendy Toussaint remained unbeaten with a second round stoppage of Newark, New Jersey’s Malik Jackson. The mobile Toussaint establishing his jab in round one early set up Jackson for a destructive 1-2 dropping and stopping Jackson at 2:04 of round two. Toussaint, improves to 6-0, 1Ko while Jackson sinks tom 1-5-4.