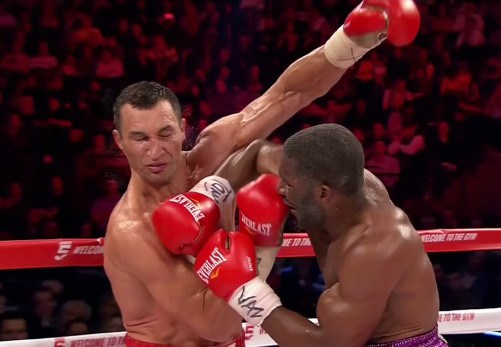 After last night’s jab-hug-hold fest in NY, that finally saw Wladimir Klitschko (64-3, 53ko) deducted a point for the antics that have served him so well for so long, it would appear WBO #1 Tyson Fury (24-0, 18ko) will definitely be the giant Ukranian’s next contest later this summer.

If the reception from the watching American public towards Klitschko was lukewarm before the opening bell, then last night’s performance against Bryant Jennings will have done nothing to whet their appetites ahead of a clash with the 6ft 9″ British gypsy.

I, along with many others, wrote Jennings off leading into the fight, and whilst the score cards pitched a shut-out, you can make an argument that they don’t fully reflect the performance of the Philadpelphia fighter, who showed heart and persistence in spades.

Sadly that doesn’t win you rounds, and the frustration at not being able to negate Wladimir’s ram-rod jab became evident quite quickly, yet I’m happy to admit I was wrong in thinking Jennings would be blown away and stopped early.

My prediction that Wladimir would like to look more exciting against Jennings, (like he did last time vs Pulev), turned out to be wrong also, and we saw no change from the usual, “safety-first” style that was adopted under the late Manny Steward long ago.

Not a great move by the usually astute Klitschko who is more than aware of the business/entertainment side of the game – hence why he was in America for a “statement” performance in the first place!

Jennings can take some heart from his performance, and certainly isn’t finished at world level just yet. He can come again.

“I just got the news that I am obligated to satisfy my mandatories. The way that’s it’s looking I am fighting Tyson Fury next”

“Obviously a fight with Tyson Fury will not be in America. I think this fight needs to happen in Europe. Whether it is Germany or Great Britain, that is something we will have to work out.”

Frank Warren and Peter Fury, Tyson’s trainer, believe the fight is likely for a UK football stadium in the Summer/Autumn.

Following Klitschko’s win over Jennings they have 30 days to put the fight together before it goes to purse bids.