Fundora (20-0-1, 13 KOs), of Coachella, Calif., fresh off a victory over Erickson Lubin in a potential 2022 Fight of the Year in April, showed off his noted ability to fight on the inside while also flashing an improved jab against a competitive Ocampo (34-2, 22 KOs), who rode a 12-fight winning streak into the bout. 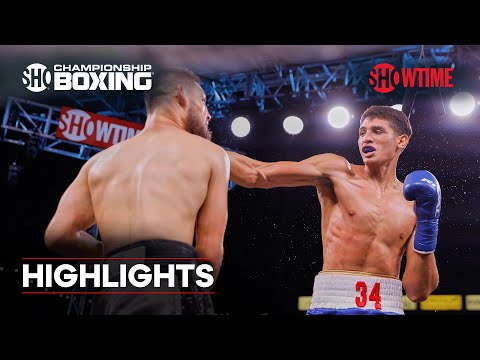 “I thought I would show a little boxing and put that on display but you know I still had to bang for the fans,” said Fundora, who won by scores of 119-109, 118-110 and 117-111. “That’s what they came here for, so I had to give it to them. I felt my jab was solid and the difference and had him backing up. You know I like to break my opponent down and he was very tough. I am pleased with this performance because I did what we trained for. I trained for boxing and I trained to stay at a distance and I think we did that in the fight.”

The six-foot-six-inch Fundora used his height to his advantage in the early rounds, throwing over 170 jabs in the first three frames. Ocampo showed his mettle and went punch for punch with Fundora early, having success with hooks to the body and by finishing combos with left hooks to the head.

“I never felt like he hurt me,” said Ocampo. “It was a tough fight, and Fundora was a quality opponent. If I could get a rematch, I’d train even harder to knock him out next time. My message to everyone in Mexico is that Ocampo is here to stay.”

In round four, the fight turned into a toe-to-toe battle of attrition, as Fundora pushed forward and winged strong shots on the inside. Ocampo was able to stay on his feet, but had multiple moments where he looked weary and like the end might be near. Ocampo was able to almost go punch for punch with Fundora throughout the 12 rounds throwing 869 shots to Fundora’s 871, but it was Fundora who owned the 259 to 192 edge in punches landed.

“He’s a tough Mexican,” said Fundora. “My hat’s off to him. In the middle I wanted to see if I could hurt him. I know Errol Spence Jr. caught him with a body shot and I saw in the middle of the fight he was open for the left uppercut to the stomach so I saw that would slow him down.”

Fundora showed savvy beyond his years in the championship rounds, switching back to a focus on the jab as he cruised through the final two stanzas to earn his unanimous decision.. After the fight, Fundora expressed his hope that his next bout would be for the undisputed super welterweight world championship, currently held by Jermell Charlo.

“I’m the WBC mandatory,” said Fundora. “I’ve earned my spot and we’ll see what happens. But I hope I’m next. Fingers crossed.”