Results from today’s weigh-in below: 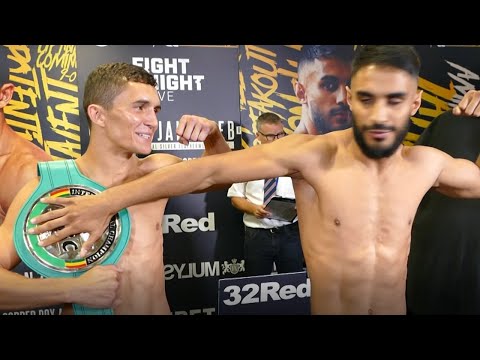 Sunny Edwards has had to withdraw from his planned IBF flyweight title defence against Jayson Mama this weekend due to injury.

Edwards was due to put his title on the line against Mama on a Queensberry Promtoions show at the Copper Box Arena in London on Saturday, live on BT Sport.

Unfortunately, Edwards has suffered an ankle injury ahead of the fight, and the world title bout is no longer able to go ahead this weekend.

Edwards said: “I’m gutted that my fight on Saturday is off. I will have a rescheduled date ASAP. I want to apologise firstly to my opponent Jayson & his team, as I understand the frustration they must be feeling, secondly to Frank Warren & BT as my homecoming was set to be the biggest night of my career.

“Finally everyone who was looking forward to my first world title defence. I am genuinely devastated but with the advice from those close to me, it would have been a poor error of judgement risking the position I’m in now and fighting whilst not 100%.”

Further news on a rescheduled date for the bout between Edwards and Mama will be released in due course.

The new series of shows, branded ‘FIGHT NIGHT LIVE: THE PROSPECTS’, is topped by South Londoner Louie Lynn (9-0, 7 KOs) who defends his WBC International Silver Featherweight title in a ten round contest against Bradford’s Amin Jahanzeb (8-0, 2 KOs), live on BT Sport 1 HD and available to all on the BT Sport Boxing YouTube page.

Portsmouth heavy hitting Lightweight Mark Chamberlain (8-0, 5 KOs) has been added to the bill and will face Ghana’s Benjamin Lamptey (11-4-1, 9 KOs) over eight rounds.

Mark had been due to face Lamptey 24 hours later but the card has been cancelled after Sunny Edwards IBF World Flyweight title defence against Jayson Mama was called off.

Read:  Broner vs Figueroa on August 20 live on Showtime

Promoter Frank Warren: “It’s fantastic that BT Sport are getting behind our prospects and showing their support for boxing.

“Fans at the arena and watching at home will see a thriller between Louie and Amin.

“I’m delighted that Mark will get more exposure on TV, and I believe like many of the boxers in Wayne Batten’s stable it’s only a matter of time before he becomes more widely known.”