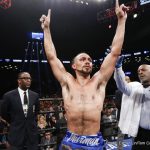 WBC heavyweight champ Deontay Wilder is not the only big name who will likely be out of action for the rest of the year due to injuries picked up in the ring. According to Showtime boss Stephen Espinoza, WBA welterweight king Keith Thurman will probably rest up for the remainder of 2016, so as to allow the cuts he picked up in his tremendous war with Shawn Porter to heal. And as gruelling and as draining as the June fight was for both winner and loser (there really was no “loser” in the FOTY candidate) a good break would not be a bad idea for both Thurman and Porter.

But, as Espinoza told RingTV.com, Thurman could be back with a massive fight in 2017: a unification fight with WBC welterweight ruler Danny Garcia. While “One Time” will live up to his nickname by having fought just one time this year, Garcia is reportedly in talks to face former champ Andre Berto in either September or October. A possibly risky fight for Garcia, who is unbeaten like Thurman, the rumble with Thurman would ideally come next should “Swift” get past Berto okay.

Topping Lee Baxter Promotions’ inaugural “Next Generation” fight card and with an excited crowd supporting him, the taller Wilcox looked to use his range from the opening bell. Orozco was able to close the gap at times during the first few rounds, landing some decent shots in close quarters. Wilcox effectively adjusted and found his range, peppering Orozco with clean punches. For the remainder of the bout, Orozco attempted to press forward but was unsuccessful as Wilcox continued to land clean shots to the body and head of his game foe en route to a unanimous decision.

Dennis Ceylan (17-0-1, 8 KOs) will face Ryan Walsh (21-1-1, 10 KOs) for the vacant European Featherweight title on October 15 when the Nordic Fight Night returns to the Arena Nord in Frederikshavn, Denmark. 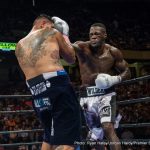 There was a time, in the 1970s and 1980s especially, when almost all the big heavyweight fights took place under the glitzy lights of Las Vegas. Be it George Foreman, Muhammad Ali, Larry Holmes, Mike Tyson or Evander Holyfield, and be it Caesars Palace, The Las Vegas Hilton or The Mirage, most of the heavyweight action was being fought in the Nevada desert. This changed in the 2000s and it’s hard to think of the last massive heavyweight showdown that took place in Vegas.

But this could change next year, so says Showtime boss Stephen Espinoza. Speaking with RingTV.com, Espinoza says there is a “lot of pent up demand” for a big heavyweight occasion in Vegas, and, all being well, rival title holders Deontay Wilder and Anthony Joshua will be giving these fans what they want before the end of 2017. 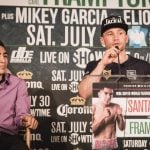 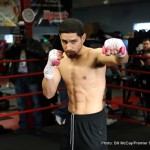 It’s not official yet, but welterweights Danny Garcia and Andre Berto are in talks for a possible September or October fight; so reports RingTV.com (although the man with all the news, Dan Rafael, wrote how this fight was a possibility a few days ago). Reportedly, the likely date is September 24th at The Barclays Centre in New York, with a later date in October also being looked at. But never mind the finer details – are fight fans happy with this match-up?

It’s by no means a bad fight, but shouldn’t Garcia – a superb fighter who looked as though he was at least three feet along the road to superstardom after his fine 2012/2013 wins over Amir Khan and Lucas Matthysse – be facing the elite of the elite? Okay, Garcia, 32-0(18) has not had that much experience as a welterweight (his biggest wins coming down at 140) but with the likes of Keith Thurman calling him out and with those recent reports suggesting “Swift” was in the running to face the soon to return Manny Pacquiao, it’s possible fans will fail to be too thrilled if the Berto fight is finalized and then announced. 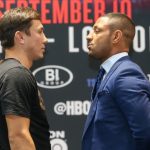 RICKY HATTON has warned Tony Harrison that he will be in for a rude awakening if he dares to underestimate Sergey Rabchenko this weekend.

The pair meet in an eliminator for the IBF super-welterweight title on the undercard of the huge Santa Cruz v Frampton bill in Brooklyn, New York on Saturday night (July 30).

And Hatton, who has trained Rabchenko for the past four years, believes both Harrison and US fight fans could be overlooking his fighter’s ability due to the manner of his sole defeat.