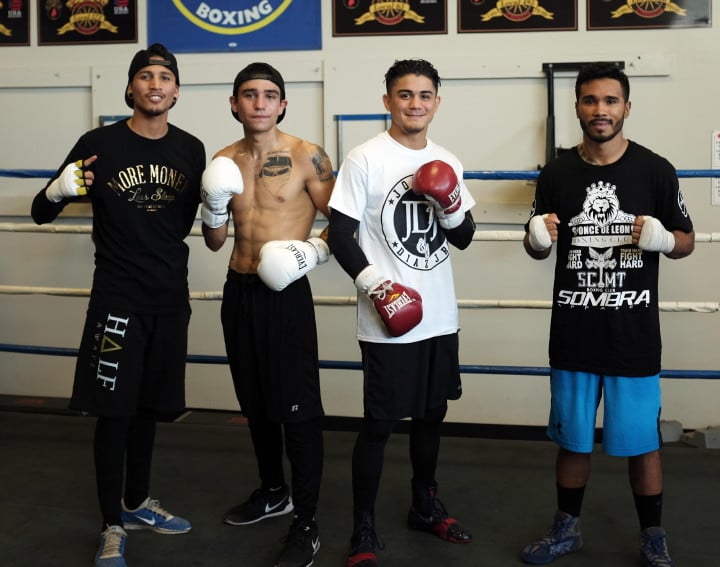 NABF Featherweight Champion Joseph “Jojo” Diaz, Jr. will put his title and his undefeated record on the line in a 10-round fight against Victor “Pitufo” Proa (28-1-2, 21 KOs) of Monterrey, Nuevo Leon, Mexico. The main event of the night features number one rated contender by the WBC, “Relentless” Antonio Orozco (24-0, 16 KOs) taking on Abner “Jaeger” Lopez (25-5, 19 KOs), of Tijuana, Baja California, Mexico in a 10-round super lightweight fight. The event will be televised live by HBO Latino® Boxing beginning at 11:15 p.m. (live ET/tape-delayed PT). Tickets are moving fast for this event, with just a limited number of tickets left available for purchase.

Below is what the fighters had to say at today’s media work out:

“I’m training a lot harder at this fight. I’m training with a lot more authority and have been working on landing my shots. While I’m a southpaw and he’s an orthodox, he’s very heavy handed and I know what I have to do to go in there to break him down.

“It’s great to be back fighting at Fantasy Springs, and see all my fans from the desert.

“I’m very excited to be on HBO Latino. It’s a dream come true and gets me a step closer to fighting on HBO Pay-Per-View.”

“I know that my opponent is going to fight to the tooth on this, and we are both going to be searching for the knock out.”

“Growing up as a kid I did many tournaments at Fantasy Springs Resort Casino, and I feel at home fighting there. It feels like a mini arena, it has a great vibe.

“I have prepared myself physically and mentally for the fight and my only goal is to stay focused on one thing–winning.

“I’m going to have about 200 marching skulls coming to Fantasy Springs, and I can’t wait to hear their cries and see them enjoying themselves on July 30.”

“I have come to fight with a heart, like a Mexican warrior.

“I firstly want to thank God, as well as my team for giving me this opportunity to show the boxing world what I have.

“I have trained for this spiritually, physically, and with the help of my trainer, former world champion Daniel Ponce De Leon; I know that winning this fight would make my career.”

Limited tickets at the $25 level are still available for purchase at the Fantasy Springs Box Office, by calling (800) 827-2946 or online at www.fantasyspringsresort.com. All floor seats are now sold out.