Skip to content
They say the apple doesn’t fall too far from the tree, but telling that to Mexico’s legendary fighter Julio Cesar Chavez would be downright disrespectful.

SKY Sports has signed an agreement with England Boxing to televise the 127th Elite Men’s National Finals which will be held at the Echo Arena Liverpool on the weekend of 25-27 April 2014.

In a revamp of the latter stages of the competition, the quarter-finals, semis and finals will be held over three consecutive days of competition in the 5,000 plus seater Arena. 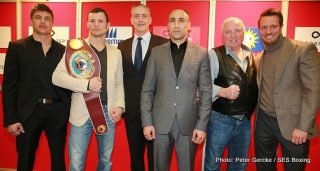 The fate of each fighter’s legacy is at stake this Saturday night when Robert Stieglitz takes on Arthur Abraham in what could be the final installment of a trilogy from the GETEC Arena in Germany.

Legacy is a word used quite often in sports. Peyton Manning’s legacy was the key talking point for pundits and fans alike in the lead up for the Super Bowl.

Nearly every time Lebron James looses a game in the playoffs or displays greatness, King James legacy is always being question and debated in the mainstream.

The legacy of boxers comes in all shapes and sizes. Some men go down as hall of famers, few become the best fighters of their generation, if remembered most boxers are seen as warriors respected for being a tough S.O.B.

I”m putting myself out there and making a pretty bold prediction but I feel that Marcos Maidana is going to shock the world by knocking out Floyd Mayweather in the 11th round of their upcoming fight. I have three reasons for thinking this: Floyd hasn’t gotten any better and is slipping, Marcos Maidana has just the right style to beat Floyd, and finally, Maidana has sky high confidence!

Totowa, NJ: Main Events has added a Super Middleweight to their already impressive roster with the signing of Puerto Rican sensation Roberto Acevedo (8-1-0, 5 KOs). Acevedo is coming off a huge upset win over Russian Ilshat “The Sheriff” Khusnulgatin (11-1-0, 6 KOs) at Resorts International Casino and Hotel in Atlantic City, NJ on January 24th.

Acevedo sees this opportunity with Main Events as an important step to achieving his goals. He said, “My goal is to become a world champion and make my country proud of my accomplishments. I know that Main Events is the right company to take me there, I am really excited and looking forward to this next step in my career.” Main Events’ CEO Kathy Duva said, “We have great faith in Roberto’s ability to continue to overcome every obstacle that is put in front of him-all the way to the world title!”

LOS ANGELES (Feb. 27) – 2012 Olympic Bronze medalist for Great Britain Anthony Ogogo will make his 2014 debut this Saturday, March 1, when he competes against County Durham’s Greg O’Neil in a six-round middleweight bout on the Ricky Burns vs. Terence Crawford undercard at the Scottish Exhibition and Conference Centre in Glasgow, Scotland.

For Ogogo’s promoter, Richard Schaefer, this is an exciting time to be a fan of the young British star.

PROVIDENCE, R.I. (Feb. 27th, 2014) – Fighting on a major network in front of a worldwide audience might be unnerving for someone who doesn’t know any better, or someone who has never faced the music on boxing’s biggest stage.

Vladine Biosse (15-2-2, 7 KOs) actually looks forward to the pressure of the bright lights and adoring eyes. It’s brought out the best in the Providence, R.I., southpaw, whether it’s the two big wins he scored early in his career on ESPN2, or his showcase victory over former world-rated contender and hometown rival Joey Spina, a fight few thought he had a chance to win.