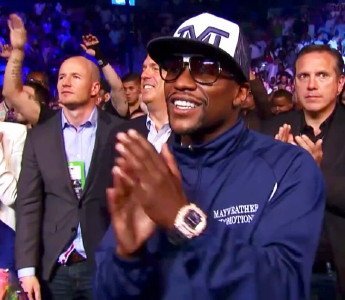 But is there a chance, even a small one, that age will soon begin to creep up on Mayweather? As special as he is and as dedicated as he is towards living the life a boxer needs to live so as to retain his skills, Mayweather is only human and therefore susceptible to the ageing process like anyone else. In the past, great fighters have been able to fight off Father Time well into their late 30s, even into their 40s – think Sugar Ray Robinson, Archie Moore, George Foreman and, of course, Bernard Hopkins – but age did catch up with lower-weight greats such as Sugar Ray Leonard (who began to face rapidly at age 33), Julio Cesar Chavez (who began a slow fade in his mid-thirties) and Pernell Whitaker (who lost a step or two at the age of 33). Will age begin to creep into Mayweather’s bones as well?

If Mayweather’s reflexes, his primary ring asset, do dull by even just a fraction, who knows – maybe some real vulnerability will eek its way into his game; giving someone like a still-fast and terribly powerful Pacquiao a very real chance at pulling off the sensation (if Floyd ever, ever, ever agrees to face the one man who could prove his fiercest, most testing ring rival, that is). Maybe this is clutching at straws, though, because Mayweather has not yet shown anything approaching even a miniscule decline. If anything, and judging by his latest master class against Saul Alvarez, Mayweather has actually got BETTER!

But boxing is a strange and incredibly demanding sport, and a fighter, any fighter, can grow old, quite literally overnight. Doesn’t it make you wonder how Mayweather would cope if he suddenly found himself in the ring, not quite feeling his old self, vulnerable to punches coming at him as they did as never before and actually began not only landing, but landing regularly? Mayweather has famously said a number of times how he never intends to prove he can take a punch (although he did survive quite a scare when Sugar Shane Mosley cracked him good with a couple of right hands to the head almost four years ago) – but if and when his speed and reflexes begin to desert him, Mayweather might find himself having to do just that.

The boxing ring is the loneliest place in the world for a fighter who finds himself no longer able to turn on the magic. Will Mayweather prove to go on and join the small group of legends who managed to avoid such a fate?