It’s quite strange to think that both Stanley Ketchel and Billy Papke – who went to war with one another no less than four times, with at least two of the four fights being ranked amongst the most brutal and bloody fights in ring history – died a premature and violent death. Two of the toughest, roughest, and most savage of fighting men, these two middleweights came within an inch of quite literally fighting to the death in the final two bouts of their rivalry.

Ketchel won the first fight by non-title decision, Papke KO’d Ketchel in the 12th round in their rematch to take the world title, and “The Michigan Assassin” won fights two and three – the third fight by 11th round KO, the fight so damaging for Papke his own wife could not recognize him when it was all over, and the final fight by grueling 20-round decision. These two born fighters took turns dishing out and taking sickening amounts of punishment during a time when pro fighters really were forged from iron when poverty and seriously hard times forced them to fight as hard as they did.

After what they went through against each other, Papke and Ketchel were more than entitled to long and happy years of retirement. It didn’t happen for either man. The Ketchel murder is a famous story. In October of 1910, Ketchel, when aged just 24, was shot in the back by a man named Walter Dipley, who was beside himself in a jealous rage over a woman.

Papke outlived his former rival by a substantial margin, yet he too met a ghastly end. Papke, perhaps suffering from an undiagnosed brain injury (not surprising at all considering the fearsome amount of punches he took during his 63-fight pro career), murdered his ex-wife with a gun and then turned the weapon on himself, shooting himself three times in the chest (this no easy thing to do). It was a shocking case of murder – suicide.

According to reports from the day, Papke, aged 50, was “eking out a living as a host at Fireman Jim Flynn’s bar,” and he was “moody” on the day of the double crime. Papke and his wife had separated, and the former champ dearly wanted a reconciliation. Apparently, Papke visited his ex-wife numerous times before the murder – suicide, sometimes becoming threatening when she repeatedly refused his attempts to reconcile. On Thanksgiving night, 1936, Papke again visited his ex at her home, this time arguing fiercely when inside, as per witness testimony. Then, these witnesses heard five gunshots. 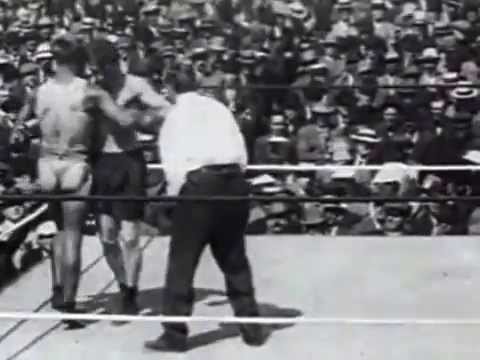 Papke was found dead; the .38 revolver still clutched tightly in his hand. The two bodies were taken to the morgue, the three sons of Papke being left to never fully understand why their father had committed such a brutal act.

So was it pugilistic dementia and its then widely misunderstood effects on a person’s cognitive ability and personality that led Papke to do what he did? Most likely, but we will never know for sure. “Billy will never hurt me,” Papke’s estranged wife often said before the disturbing events of November 1936. How wrong she was. It was a chilling end to the lives of two people, an event that may well have been prevented had the Papkes been living today.

Stanley Ketchel seemed to try his darn best to kill Billy Papke over the course of those four fights, fought over a 13-month spell, while Papke did his best to return the favor. How ironic it is that both men met their end in such shocking, bloody circumstances.

(read the book: ‘The Killings of Stanley Ketchel’ by James Carlos Blake)