Huge underdog Leigh Wood (25-2, 15 KOs) pulled off a massive upset on Saturday night, dethroning WBA secondary featherweight champion Xu Can (18-3, 3 KOs) by a 12th round knockout at the Matchroom Fight Camp in Brentwood, Essex. The fight was stopped at 2:43 with Xu still on his feet but looking hurt and beaten.

Wood, 32, put Xu on the canvas with a big right hand in the 12th. After he got up, Wood unloaded a blizzard of punches that led to the referee Marcus McDonnell pulling the plug on the contest, albeit a bit early/premature.

Wood didn’t need to use a stiff arm to win, though because he had a huge size and power advantage going for him, and that was all he needed.

All night long, Wood was nailing the faster but weaker Xu with hard shots and showing excellent variety. Overall, it was a masterclass performance from Wood, who came into the bout ranked #12 with the World Boxing Association.

Wood had been beaten a couple of times during his career by Jazza Dickens and Gavin McDonnell, which is why he ranked low. He wasn’t supposed to win tonight, but he had the perfect fighter in front of him in the smaller, weaker Xu, and he had too much for him.

After the fight, Wood said he wanted to fight WBA ‘Super World’ 126-lb champion Leo Santa Cruz next. WBO champion Emmanuel Navarrete was mentioned as a possibility as well.

Navarrete would be a tough opponent for Wood because he throws a lot of punches, and he’s capable of throwing them from any angle.

Oddly enough, WBC champ Gary Russell wasn’t mentioned. Perhaps Russell would be a little too much for Wood to chew, as there would be a huge difference in experience and overall talent for him to face him.

Matchroom Boxing promoter Eddie Hearn said he doubts Xu Can will want a rematch with Wood after losing. Hearn could be wrong.

This was a voluntary defense for Xu, and it’s hard to imagine him NOT having a rematch clause in the contract. It would be insane to think that Xu won’t want to avenge his loss.

In not a huge surprise, super middleweight Jack Cullen (20-2-1, 9 KOs) beat the struggling former world title challenger Avni Yildirim (21-4, 12 KOs) by a 10 round unanimous decision that was never really competitive.

The 29-year-old Yildirim, fresh off his third round stoppage loss to Canelo Alvarez, was hammered by Cullen, 27, and unable to match his high work rate.

Cullen just stayed busy, throwing jabs and a lot of punches that kept Yildirim form firing his own. Early on, Yildirim was throwing some nice body shots, but he tired in the second half and was mostly plodding forward, holding and doing very little.

Yildirim’s loss tonight was his third consecutive since 2019. It’s unknown where he goes from here.

If Yildirim can’t beat British domestic level fighters like Cullen, he has no business fighting any of the top tier guys at 160, which is where he intends on fighting now.

The way Yildirim looked tonight, you’d be hard put to find anyone in the top 15 at middleweight that he can beat.

Obviously, this reflects badly on Canelo Alvarez, who insisted on fighting Yildirim earlier this year in the main event on DAZN. It was such a poor fight. Canelo got top dollar for that mismatch with Yildirim.

In cruiserweight action, Chris Billiam-Smith (13-1, 10 KOs) beat Tommy McCarthy by a 12 round split decision to earn the European, British and Commonwealth straps. 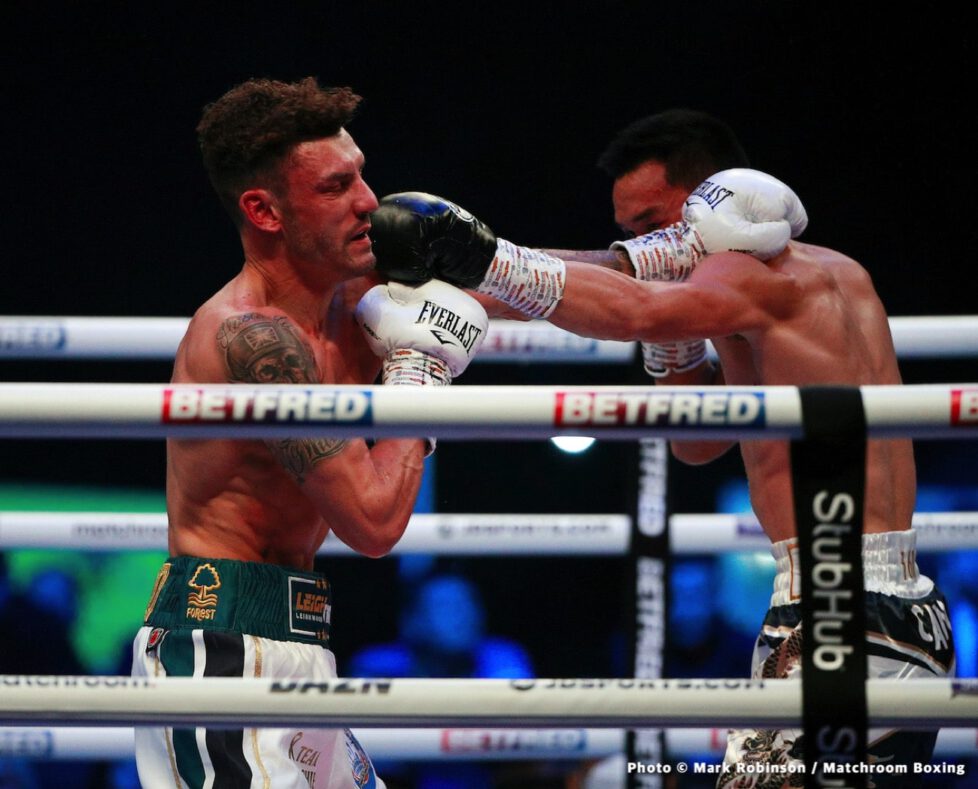 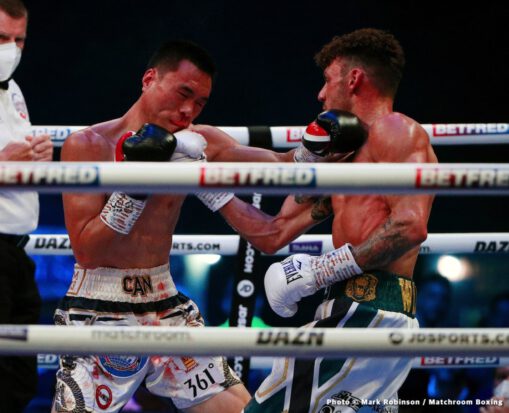 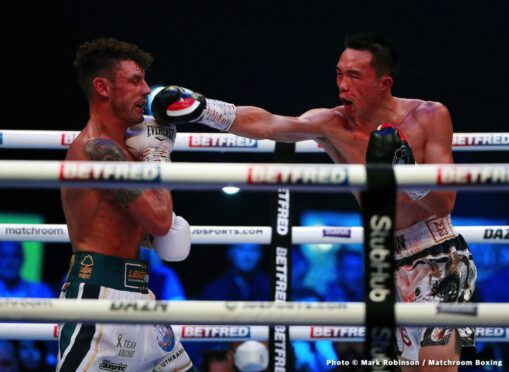 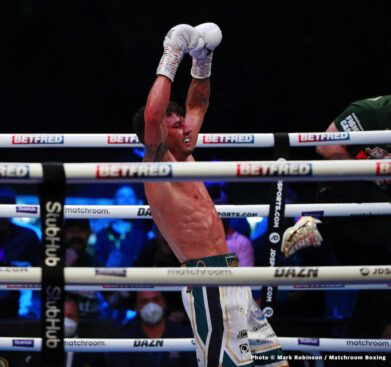 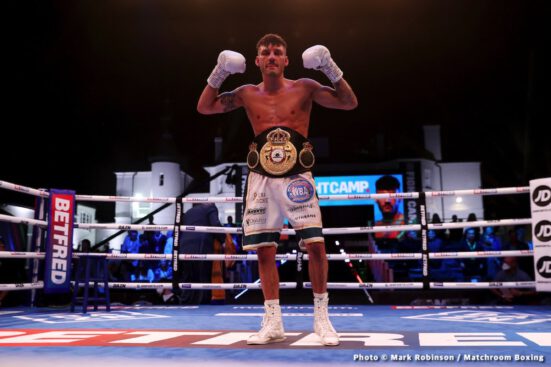 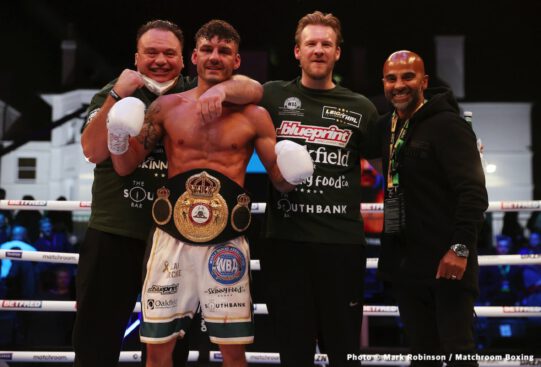 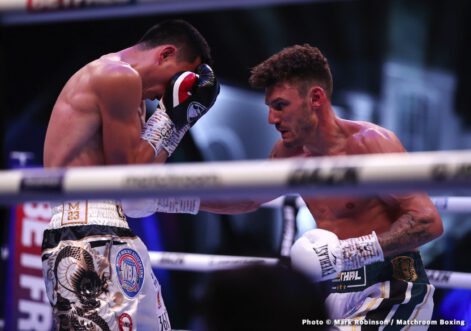 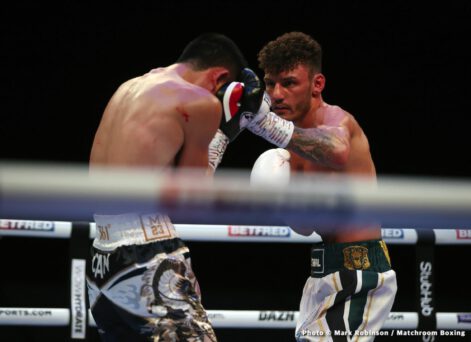 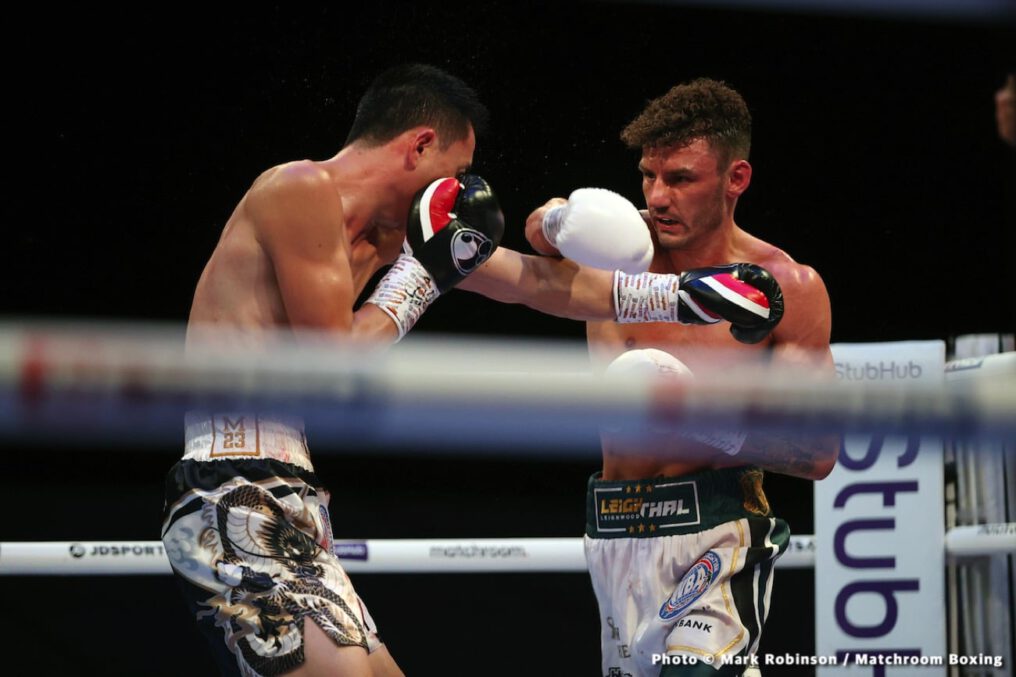 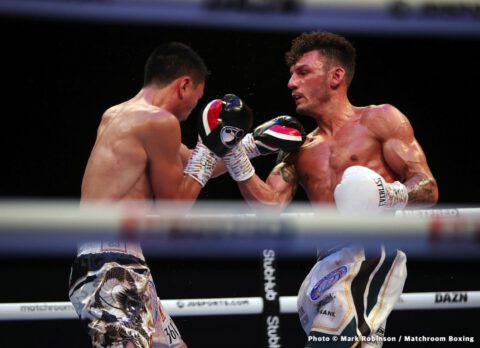 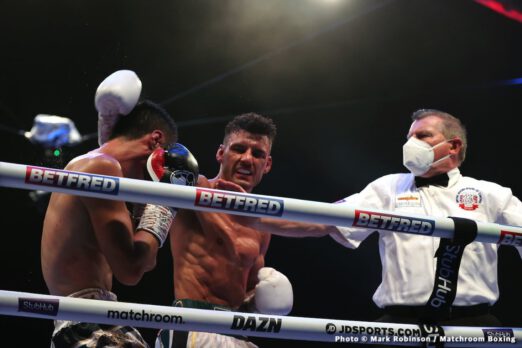 *** FREE FOR EDITORIAL USE *** XU Can vs Leigh Wood, WBA Featherweight World Title Fight. 31 July 2021 Picture By Mark Robinson Matchroom Boxing. The ref stops the fight as Leigh Wood is declared the winner. 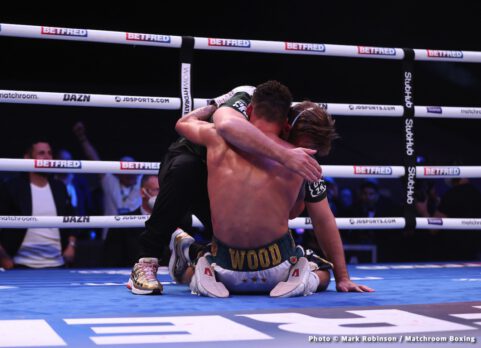